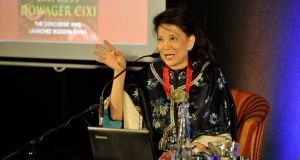 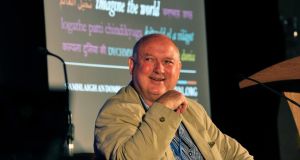 Louis de Bernieres ‘in conversation’ reading from some of his unpublished works at the Headfort Hotel. Photograph: Clodagh Kilcoyne 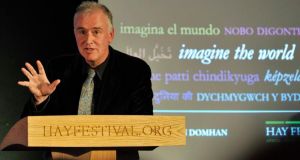 Visitors to the Hay Festival in Kells, Co Meath this weekend enjoyed both food for thought and food for the senses. It was a winning combination. Final tallies have yet to be done, but the organisers say that ticket sales are significantly up on last year’s 10,000 total.

“No wheat?  No sugar?  No dairy?  Where’s the exit - that’s what you’ll all really want to know,” joked the broadcaster and food blogger Susan Jane White as her talk at the Boyne Valley Food Village filled with the culinary curious.

We weren’t a promising audience for White’s food fundamentalism. Many bore takeaway coffees. Some - guilty, your honour - had just scoffed home-made rhubarb-and-custard ice cream from the Burke’s Farm stall outside.

But when White began to describe the illness that had prompted her to adopt radically alternative cookery in her mid-20s, the tent went deathly quiet. By the time she passed around chunks of focaccia bread made with milled flaxseed we were all firmly resolved to go home, coat ourselves in hemp protein powder and knit our own almond milk without delay.

An afternoon session with Louis de Bernieres at the Headfort Arms Hotel offered more orthodox festival fare. Author of the bestselling Captain Corelli’s Mandolin, De Bernieres has brought out a collection of poems, Imagining Alexandria, in homage to the Greek master Cavafy.

Would he read one for us, asked his interviewer, RTE’s Sean Rocks. “Well, there’s a poem about the death of Socrates,” De Bernieres began. “Or there’s one about a man with an enormous willy.”   (No prizes for guessing which poem we voted for.)

De Bernieres was the ideal festival guest.  He recited a Shakespeare sonnet from memory.  He prompted roars of laughter with accounts of eccentric neighbours in the Suffolk village where he grew up.  At once the quintessential English gentleman and a gentle soul who seems to float outside - or above - the sharp edges of our contemporary world, he has an extraordinary ability to make us take a long, hard, fond look at the strange creatures known as human beings.

The Chinese writer Jung Chang held a crammed room spellbound with tales from China’s, and her own, history. Dressed in a century-old kaftan, she had a regal air which belied the hardship of her family’s fate during the Cultural Revolution, as related in her memoir Wild Swans, which has sold 20 million copies worldwide: her mother made to crawl across broken glass on her knees, her father imprisoned and driven insane.

Afterwards, the queue to have her sign copies of her weighty historical study of the Chinese Dowager Empress Cixi appeared to have been touched by some weird Taoist magic. People just kept coming. A Chinese couple with a baby in a pram. Fragile folks with walking sticks.  A lad with his head stuck in his smartphone.

Jung Chang had a word for every single one.  She listened attentively to their stories of reading Wild Swans with an elderly parent, or in hospital, or during a bad time.  It wasn’t magic, just the other side of the literary coin: the graceful, dignified human one.  It was a memory to take away from Hay at Kells and cherish. And hey. If the healthy eating resolution lasts even half as long, happy ever after surely can’t be far away.

The Movie Quiz: Who stirred the late Olivia de Havilland to consult her lawyers?
5