Sorry to Disrupt the Peace review 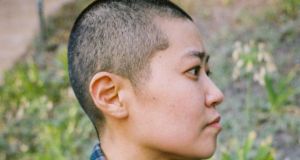 Patty Yumi Cottrell’s Sorry to Disrupt the Peace is a beautifully sad and funny debut that disturbs the peace and makes no apologies for doing so. Photograph: Hanly Banks Callahan

“How is anybody supposed to live with anything?” In her extraordinary debut, Patty Yumi Cottrell gives her 32-year-old narrator Helen Moran the impossible job of figuring out why someone kills themselves. The internet tells her there are six reasons, but Helen can’t match any of them to her 29-year-old brother’s decision to shoot himself in a car outside a hospital in their native Milwaukee.   opens with a phonecall from a distant relative informing Helen of her brother’s death. What ensues is a highly unorthodox detective story that forces a young woman to revisit her past.

The novel’s other mystery is even more compelling, centring on Helen and her estranged relationship with her adoptive parents. Helen and her brother are non-biological adoptees of Korean descent, brought up in a religious household in the Midwest. Currently living in a shoebox apartment in New York, whose history of bed bugs is hilariously related, the narrator hasn’t spoken to her parents in five years. Throughout the novel, they’re referred to as her “adoptive parents”, one of many stylistic devices that brings welcome humour to a sad story. Cottrell has created a most unusual narrator in Helen, one that veers from acute awareness to unhinged logic. Readers will suspect long before it’s revealed that there is mental illness behind her bizarre reactions to ordinary human behaviour. Cottrell uses the character’s singular personality to call out the hypocrisies of society. Her grieving “adoptive parents” are at a loss as to why their “adopted son” killed himself. The searing flashbacks that Helen gives in her blunt, impactful way tell a different story.

Sorry to Disrupt the Peace makes clear the destructive family dynamic at the heart of both siblings’ issues, but avoids lamenting the misery. Helen’s story is all the more effective for this as readers can judge the parental deficiencies for themselves. Stories of the past centre on face slapping, confinement, her mother washing her mouth out with soap for bad language – all very literal, very Catholic punishments that haunt years later. Although her father gives out to Helen for not using “the entire system of support” at her disposal, there is little evidence that such a system exists. As she returns to Milwaukee to face down her parents, she thinks “it was only a little funny that my adoptive brother seemed to have the final word on their system of support”.

Cottrell is careful to give a multifaceted perspective. Various relatives and friends show how hard it is to connect with Helen. This somewhat mitigates the parents’ unwelcoming attitude to their prodigal daughter, though sympathies remain with the oddball narrator.

In her peculiar way of looking at the world, Helen is reminiscent of the wonderfully eccentric narrator from Paula Cocozza’s recent debut How to Be Human. Cottrell’s writing also recalls contemporaries such as Michelle Tea and Miranda July in her bleak outlook on the world and the stark language she uses to portray this. Although born in Korea and raised by adopted parents in the Midwest, her novel is entirely fictional. Her work has appeared in The White Review, Guernica, BOMB, Gulf Coast, and Black Warrior Review.

Cottrell’s style is notable for a debut author. Techniques of repetition, deflation and intertextuality are seamlessly worked into the plot. A quote from Kafka’s diaries – “You too have weapons” – poses interesting questions for her larger themes of suicide and self-worth. At the other end of the scale, there’s a laugh-out-loud pamphlet on how to survive in New York with no money (basically by manipulating rich white people). Cottrell uses feigned wonder to great effect, with Helen’s mantra of “I was astonished” adding humour to grubby everyday interactions. The ironic use of exclamation marks is similarly funny: “That’s what Nietzsche said, philosopher of life!”

But the main source of the black comedy in this novel comes from its unstable narrator. Helen downs six shots of espresso before getting on the plane to Milwaukee. The things she remembers from her home city are far from sentimental: “I saw in my head the nunnery where all the nuns died and the priests took over, the pharmacy that housed a child-pornography ring”. Christening herself “Sister Reliability” in her part-time job looking after disadvantaged teens, Helen later admits she smokes pot with her wards. She also steals a bag of heroin from work and bites a man’s tongue off when he tries to kiss her at a party.

Cottrell manages to balance all this with the topic of suicide. At the heart of the book is Helen’s need to find out why her brother killed himself, “the rigor of a proper metaphysical investigation”. By the end, she discovers that suicide is “a husk of a word”. Sorry is a beautifully sad and funny debut that disturbs the peace and makes no apologies for doing so.