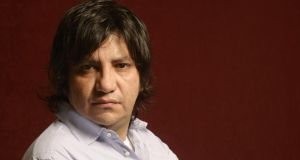 Chilean writer Alejandro Zambra, shortlisted for his book, My Documents. He has published three novels and his short stories have been published in the New Yorker, Tin House, Harper’s and elsewhere. All his books are available in English translation. Photograph: Ulf Andersen/Getty Images

The Munster Literature Centre revealed the six books on the shortlist this evening:

British author Clive Sinclair, one of this year’s judges, said: “Short in length, but long in reach, these stories echo way beyond their starting points in – say – Nashville, Chile or Montana. They reached the shortlist not because they spoke the loudest, but because the words that made them managed to be both particular and universal.”

Bender, one of the six shortlisted authors, said: “The word inventors have to create a new term to describe how I felt when I learned that Refund was on the shortlist. Excited, thrilled, honoured – none of them quite do it. To have my book included on this list, to join the incredible writers on it this year and in years past, to be part of this necessary celebration of the short story – there is no word that will express this. Thank you to the Munster Literature Centre for all you do for the short story. There is just a lightness within me, and enormous thanks.”

Jennifer Hamilton-Emery, of Salt Publishing, said: “We were completely bowled over when we heard the news that Carys Davies’ book had been shortlisted for the Frank O’Connor prize. It is, without doubt, the world’s most prestigious prize for short stories and to have a book placed up there with the best collections internationally is something we’ve dreamt of for many years. We are delighted for Carys, it is a fantastic achievement, and delighted too that her book has received such recognition.”

Patrick Cotter, artistic director of the Munster Literature Centre, who selected the jury and acts as non-voting chairman, said: “Every year we receive more and more entries. It is striking to note that we have three titles this year from small independent presses. It demonstrates that the dissemination of good writing is vital at a grassroots level; that multinational conglomerates don’t have a monopoly on major talent.”

The 2015 winner will be announced in early July and the award itself will be presented to the succesful writer at the close of the Cork International Short Story Festival, the world’s oldest annual short story festival.

The international jury for the award consists of US novelist Ladette Randolph, who is also editor-in-chief of Ploughshares, British novelist Clive Sinclair, and Eibhear Walshe, Irish novelist and director of creative writing at the School of English, University College Cork.

The €25,000 award is the single most lucrative for a collection of short stories and is named after the writer whom WB Yeats described as the Irish Chekhov. The award has been hugely influential in raising the profile and esteem of the short story form in recent years. Previous winners have included Haruki Murakami, Edna O’Brien, Ron Rash and Yiyun Li.

The award is co-sponsored by Cork City Council and by the School of English, University College Cork and was founded to encourage publishers to issue more collections of stories by individual authors and to acknowledge Cork’s special relationship with the short story: William Trevor, Elizabeth Bowen and Sean O’Faolain, as well as O’Connor.

Karen E Bender lives in North Carolina. She has published several novels. Her stories have won two pushcart prizes and have been published in the New Yorker, Granta, Zoetrope and elsewhere.

Carys Davies is a Welsh writer living in Lancaster, The Redemption of Galen Pike is her second short story collection. She has been distinguished in many prizes and competitions.

Tony Earley lives in Nashville. He has published two novels. His short stories have appeared in the New Yorker, Granta, Harper’s, Esquire and elsewhere.

Kirsty Gunn is a New Zealander living in Britain. She has published six works of fiction including novels and short story collections.

Thomas McGuane lives in Montana. He is the author of ten novels and three works of non-fiction. Crow Fair is his third short story collection.

Alejandro Zambra is a Chilean author who has published three novels. His short stories have been published in the New Yorker, Tin House, Harper’s and elsewhere. All his books are available in English translation.

Ardal O’Hanlon: ‘I was always this weird, watchful kind of kid’
Real news has value SUBSCRIBE