How to enter: guidelines and closing date

Entries are now being received for The Irish Times short story competition, This Means War 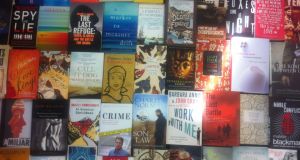 This Means War: a series of short stories and a competition

This summer, The Irish Times is running a series of eight short stories on the general theme This Means War. The context is the centenary of the outbreak of the Great War, but the stories may or may not refer to it. The theme is open to whatever interpretation the author wishes to place on it - an idea of conflict being the one obvious point of reference. The last story in the series will be chosen through a competition among readers.

Writers, whether new or established, are invited to submit a story on the theme This Means War. The story, which should be between 1,500 and 2,800 words must be an original work and never previously published. The competition will be judged by the distinguished authors Aifric Campbell, Eilis Ni Dhuibhne and Donal Ryan. The winner will be published in The Irish Times and the winning author will recieve €400 and an original artwork by Brendon Deasy.

Entries will be accepted in digital form and through e-mail only at shortstory@irishtimes.com. See also: www.irishtimes.com/shortstory. Hard copies will not be considered. Entries close at midnight on August 8th.