Shackleton: By Endurance We Conquer review: the great explorer, warts and all 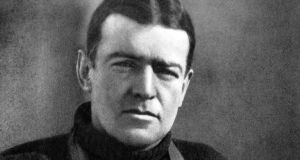 Ernest Shackleton in 1915, from Shackleton: By Endurance We Conquer by Michael Smith, published by the Collins Press.

The pallid twilight of daybreak hung over the still waters of King Edward Cove in the early hours of January 5th, 1922. So begins Michael Smith’s account of the remarkable life of polar explorer Ernest Shackleton, at South Georgia, the scene of his greatest victory in 1916. Six years later, at the same place, he would be dead from a heart attack on the eve of a final, somewhat ill-conceived expedition south.

The differences between the two expeditions sum up the apparent paradox that was Shackleton – an unsurpassed depth of vision, leadership, compassion and sense of purpose on the one hand, combined with the capacity to be vague, perhaps even hapless, in other aspects of his life.

I must confess my initial thoughts at the prospect of another book on Shackleton were to wonder what meaningful new insights could be contributed to a life so well documented. The fact that it was by someone as acclaimed as Michael Smith, however, made me sit up and take notice, given his track record of writing so knowledgeably about Shackleton’s polar contemporaries Crean, Oates, Wordie and Crozier. And I’m glad I did. This is a rich volume, written in a passionate, engaging style that makes it a compelling read, full of nuanced conclusions about many of Shackleton’s formative life moments, and meticulously researched, as with all of Michael Smith’s work.

“To sort the Shackleton myth from reality”, as the book promises, is a big call but, as someone who has spent more time than most attempting to get inside the head of Shackleton, I think it is a fair statement to make.

The strength of the book is not only the flowing style in which it is written but the way it draws on a broad volume of material to paint the picture of how Shackleton the man developed from the dreamy, distracted boy of his youth to become perhaps the greatest crisis leader the world has known. This it does in a way that is neither boring nor linear but that ebbs and flows, much as life itself, to show the genesis of a rich, three-dimensional version of Shackleton, warts and all, including his marital indiscretions and fiscal irresponsibility. He was a man who had a clear vision of greatness for himself, where the details could be worked out later, and a man for whom opportunism and positivity were key traits needed to achieve your goal, whatever it might be.

As Smith says, although this came naturally to Shackleton, it was also a skill honed through necessity both as an Anglo-Irishman never really fully accepted in either England or Ireland and as a merchant navy man trying to progress in a polar world reserved for public school Englishmen with Royal Navy credentials.

Smith reveals too that behind an apparent lack of focus, lay great stamina and determination, even in Shackleton’s youth, from surviving his father’s initial attempts to put him off a life at sea to the pursuit of the affection of Emily Dorman and the respect of her father; from bouncing back from the disappointment of being invalided home by Scott from the Discovery expedition to remaining positive despite the stresses of fundraising for expeditions and then leading them so courageously. Indeed, Shackleton seemed to revel in adversity, which gave him a foil for his boundless energy. As he casually stated, “Difficulties are just things to overcome, after all.”

Also fascinating are the details Smith unearths about how close to failure Shackleton’s expeditions were logistically and financially, often relying on a single donation from someone smitten by him to save the day at the eleventh hour. Shackleton seemed to recognise it himself, saying, “I have marvelled often at the thin line that divides success from failure and the sudden turn that leads from apparently certain disaster to comparative safety.”

He seemed to enjoy living by this adage, often relying on his quick thinking, charm and improvisation to solve problems, perhaps at the expense of more thorough planning. This same adaptable approach allowed him to pull off perhaps the greatest survival journey of all time following the loss of Endurance where all others would have come up short.

Perhaps the only minor point of difference I have with this excellent account of Shackleton’s life is that I struggle less with the “two different Shackletons” than Smith does – the “charismatic, ambitious, explorer who touched greatness” and the “flawed, restless, impatient and hopelessly unproductive character”, as Smith puts it. In fact, I believe this apparent inconsistency of character was precisely what made Shackleton who he was and enabled him to achieve what he did. In life this manifested itself in a disproportionate focus on achieving great things at the expense, perhaps, of the detailed planning of how to achieve them, while allowing other aspects of his life to wither on the vine.

As for the expeditions themselves, the same myopia enabled him to remain optimistic about the chances of success, where a more measured appraisal of his predicament would have made a lesser man feel that all hope was lost. Perhaps the youthful dreaminess and love of poetry was an early sign of his later ability to operate in this parallel reality: focused and determined when needed but with an unquenchable youthful optimism based more on instinct than fact when circumstances demanded.

The final words in the book fittingly are those of Robert Service, “who like Shackleton was never fully accepted by the establishment of the day”:

There’s a race of men that don’t fit in;

A race that can’t stay still;

So they break the hearts of kith and kin,

And they roam the world at will

They range the field and they rove the flood,

And they climb the mountain’s crest;

Theirs is the curse of the gypsy blood,

And they don’t know how to rest.

Tim Jarvis is an environmental scientist, author, adventurer and global ambassador for WWF-Australia. In 2013 he replicated Shackleton’s voyage from Elephant Island, Antarctica to South Georgia. A Discovery Channel/PBS documentary film and Harper Collins book Shackleton’s Epic – Recreating the World’s Greatest Journey of Survival has been made about the expedition. timjarvis.org