Sean O’Callaghan: how I lost my faith in James Connolly 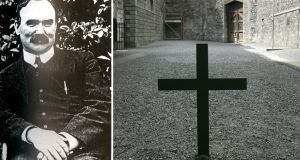 James Connolly and the cross that marks the spot in Kilmainham Gaol wher ehe was executed: “For his entire adult life James Connolly’s defining characteristic was his total devotion to the cause of Marxism,” argues Sean O’Callaghan. “Nothing was allowed to get in the way”

I have recently written a book about James Connolly, who was easily the most important political influence on me when I was growing up in Tralee. In recent times I have rediscovered the great American writer Eric Hoffer. His best known work is True Believer, which is essentially an examination of fanaticism. And I began to think about a book examining fanaticism in the Irish context, call a spade a spade and all that. I read a lot of Connolly when I was a young man and a lot about him in recent years. Hoffer clarified it all for me. James Connolly was an alpha True Believer, a classic fanatic.

So, what really is the truth about the legend that is James Connolly? The answer I found is that there are many answers; as many as you want really, but there is one undeniable truth. For his entire adult life James Connolly’s defining characteristic was his total devotion to the cause of Marxism. Nothing was allowed to get in the way, not family, not friends, not work, or even his life or that of his only son, 15-year-old Roddy, who he allowed to take part in the Rising against the fierce opposition of his mother.

Connolly described himself as a “revolutionist” and that he was; a full time professional Marxist agitator and propagandist, whether in Edinburgh, Dublin, Belfast, New York, Chicago or Pittsburgh. It didn’t matter where it was, the enemy was the same, the solution the same. “As long as I live I will have no rest, only working, educating, organising and fighting to destroy the forces that produce poverty.”

Many will and have admired such commitment. When allied to Connolly’s poverty-stricken childhood in an Edinburgh slum, the economic strictures that “forced” him to join the British army, his evident intelligence and his brilliance as a polemicist and, of course, his martyrdom what is not to admire?

Well, his all-consuming hatred for a start. Connolly came out of the Cowgate, the Irish Catholic nationalist slum in Edinburgh, raging against the world. Bow-legged with a squint and a speech impediment, he joined the British army under an assumed name, probably just short of his 15th birthday. We know almost nothing of his time in the army, spent mostly in Ireland, but in his later writings he displays a near pathological hatred of the army and everything and anyone associated with it, including the Irish dependents of those soldiers injured or killed. The hatred is frightening in its intensity.

Far from being selfless, Connolly, like all True Believers, was consumed with himself. A virtual perfect malcontent, no one was good enough, pure enough, no one committed enough. James was always right, for he had found the one true god, and having learned his catechism he never strayed and hardly questioned.

Connolly was very different in one key respect to the other entirely Irish nationalist-orientated leaders of the Rising such as Thomas Clarke and Patrick Pearse. They wanted an independent Ireland, he wanted a global workers’ republic, and for Connolly the 1916 Rising was just a staging post to that goal.

John Leslie, the Scottish socialist and writer who was the young James Connolly’s mentor, and the man responsible for getting Connolly his first full-time post as a socialist organiser in Ireland, summed it up for me when he wrote in Justice In May 1916: “Connolly did not place a very high estimate upon the labour or socialist movement in Ireland. Knowing the man, I say it is possible… he determined at all costs to identify or to indissolubly link the cause of Irish labour with the most extreme Irish nationalism, and to seal the bond of union with his blood if necessary”.

I believe that Leslie got this right. He knew Connolly from his first days of socialist activism in Scotland and was the single greatest political influence on the young Connolly.

Connolly attempted to introduce Marxism to Ireland through the agency of extreme nationalism which he knew was potentially a very powerful weapon; much more powerful than Marxism, which was insignificant in Ireland. Whatever one thinks of Connolly’s activities to this point it is here in his decision to ally himself with extreme nationalism that he created a storm of contradictions and left a very rotten legacy that has helped to disfigure Ireland ever since.

Connolly hoped the eventual revolution would be a Marxist revolution. He would have been severely disappointed with the result. This was one revolution where the Marxist was taken for a ride. Just months before the Rising, Pearse made his feelings about Connolly known to Desmond Ryan: “Connolly is most dishonest in his methods. He will never be satisfied until he goads us into action, and then he will think most of us too moderate, and want to guillotine half of us.” Those are Pearse’s own words less than five months before the Rising.

But there was another factor: Connolly was depressed and angry. The lockout had been lost, the union was in a poor state and the working class, his “revolutionary vanguard”, had chosen to fight and die in their tens of thousands for Empire, including several thousand members of his own union. Connolly wanted action and was determined to have it, which is why in December 1915, in a clear reference to Connolly, Eoin Mac Neill wrote in the Irish Volunteer. “No man has a right to seek relief of his own feelings at the expense of his country.”

As a very young man I admired Connolly greatly for his revolutionary socialist commitment and his willingness to work with extreme Irish nationalists, and the seeming clarity and undoubted inspiration of his polemics. And I suppose above all for his willingness to sacrifice everything for his cause. Now I just find all of that sad and ugly and if I need confirmation I think INLA, Connolly’s own Frankenstein’s monster, and Gerry Adams, droning on about the re-conquest of Ireland: drawing on Connolly as every pseudo leftie and half-baked “revolutionary” in the Republic seems to do these days.

What Adams actually means is the political conquest of the Irish Republic by a band of blood brothers from west Belfast and south Armagh, otherwise known as the Provisional IRA, always united in their deep contempt for an Irish State and establishment they believe abandoned them for nearly 100 years.

It is dangerous to cosy up to James Connolly because he really was a true believing Marxist revolutionary. He would have very happily sharpened the guillotine for Enda Kenny, Micheal Martin or Joan Burton.

Sean O’Callaghan is the author of James Connolly: My Search for the Man, the Myth and his Legacy and The Informer

I thought I knew everything about grief, until my 21-year-old son died
5