Book review: authors benefit from access to key figures but result is too rosy a portrait 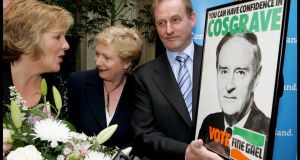 In 2007, then Fine Gael leader Enda Kenny was presented with a Liam Cosgrave election poster from 1973, watched by local candidate Frances Fitzgerald and his wife Fionnuala. Photograph: David Sleator

Towards the end of this book, Paschal Donohoe is quoted from an interview he gave to the authors in July. Reflecting on Fine Gael’s troubles in February’s general election campaign, he observed that to counteract the trends indicated by opinion polls that showed the party trailing Sinn Féin and Fianna Fáil, “We went back to basics. We focused back on the economy, the success with jobs and the risk of Brexit. Even though it wasn’t a message that chimed in with the population as a whole, it was successful in shoring up a base of Fine Gael voters.”

This was also about trying to shift the focus away from what was causing Fine Gael difficulty: in government it had not made enough progress in areas, again in Donohoe’s words, “like housing and health”.