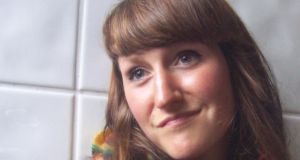 Sara Baume: born in Lancashire in 1984, she grew up in Co Cork, studied fine art at Dun Laoghaire College of Art and Design and completed the MPhil in creative writing riting at Trinity College Dublin

The 2014 Davy Byrnes short story award, organised by the Stinging Fly in association with Dublin Unesco City of Literature, has been awarded to Sara Baume for her story Solesearcher1.

The winning author, who receives €15,000, was announced this evening in Davy Byrnes by Anne Enright, a previous winner of the prize, who judged the competition with Impac winner Jon McGregor and Guardian First Book Award winner Yiyun Li. All stories were read anonymously and the five other shortlisted writers – Trevor Byrne, author of Ghosts and Lightning, Julian Gough, author of Juno & Juliet and Jude in Ireland, Arja Kajermo, Colm McDermott and Danielle McLaughlin – each receive €1,000.

Baume was born in Lancashire in 1984. She grew up in Co Cork and studied fine art at Dun Laoghaire College of Art and Design before completing the MPhil in creative writing riting at Trinity College Dublin. Her short stories have been published in the Moth, the Stinging Fly and the Irish Independent as part of the Hennessy New Irish Writing series. Her reviews and articles on visual art and books have also appeared online and in print. Her debut novel, Spill Simmer Falter Wither, will be published by Tramp Press next year.

The judges said of Baume’s winning entry: “Solesearcher1 is set in a small town on the Irish coast. The characters in it are creatures of habit and the story turns on the moment when that sense of habit becomes strange, difficult and sinister. Every detail here is quiet and hard won. Each line contributes to a growing sense of the uncanny that swamps the reader at the story’s end. There is great pleasure in the writing; a sense of place and of personality that make a piece about isolation very enjoyable, somehow, with tenderness and insight on every page.”

The award is sponsored by Redmond Doran on behalf of Davy Byrnes pub, renowned for its literary associations, particularly with James Joyce and Ulysses. Doran said: “We’re delighted to sponsor this award for a third time, and we are very proud to have had such high-calibre judges. We can only hope and imagine that Sara Baume will go on to enjoy similar success to the previous winners, Claire Keegan and Anne Enright.

Declan Meade, founder and publisher of the Stinging Fly, said: “It’s great to have been part of this award again and to have had the opportunity to read so many great stories. Six hundred stories were entered to begin with – these were then narrowed down to six and today finally Sara’s story Solesearcher1 emerges as the very worthy winner. I’m sure we’ll be hearing a lot more from this gifted young writer.”

The six shortlisted stories will be published by the Stinging Fly Press later in the year.

The Davy Byrnes short story award was won in 2004 by Anne Enright, while two of the short-listed entrants, Kevin Barry and Philip Ó Ceallaigh, went on to win the Rooney Prize for Irish Literature for their debut story collections. The 2009 competition was won by Claire Keegan, whose story Foster was subsequently published in the New Yorker and in book form by Faber and Faber.

The Stinging Fly is Ireland’s leading literary magazine which seeks to encourage and showcase the best in new Irish and international writing. The Stinging Fly Press published Kevin Barry’s first book, There Are Little Kingdoms, and Mary Costello’s debut collection, The China Factory, which was nominated for the Guardian First Book Award. Their most recent collection, Young Skins, by Colin Barrett, was nominated in the best newcomer category of the Irish Book Awards.

An extract from Solesearcher1 by Sara Baume

Phil always expected she’d end up on the dole, but she didn’t. Her father, Phil Senior, saw to it that she didn’t. Time and time again, he’d tell her it was undignified to stand in the post office queue with an old age pensioner either side and beg scraps from the taxpayer’s table. So Phil is a plumber, the only woman plumber she knows. She plumbs because plumbing was her father’s trade, and because plumbing was her father’s trade, nobody in the family ever dared to describe it as “undignified”.

“I look down people’s toilets all day,” Phil tells the week-night drinkers in The Hope & Anchor.

She goes to The Hope & Anchor every evening after the day’s plumbing. Sometimes she talks to the other drinkers, and sometimes she doesn’t. She always occupies the same stool and orders a packet of Manhattan Dry Roasted with her first pint and goes out for a smoke after her second and uses the bathroom after her third. The Ladies has never been anything other than deserted, and Phil reckons she must hew away at the same roll of paper for most of each year.

Every weeknight, she goes to her stool in The Hope & Anchor. Every Saturday, she visits her father’s house. Every Sunday, she packs her fishing box and drives her plumbing van to the open sea.

Bait, cast, jerk, reel, breach: this is what Phil cares about.

Only on Sundays does she cease egging time on until the next thing. Only with saltwater pressing waist-high against her waders does she feel calm, comforted by the squeeze of the sea. Only waiting for a bite is she content to simply wait.