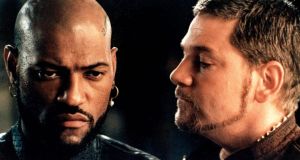 Laurence Fishburne as Othello and Kenneth Branagh as Iago.

What made Shakespeare into Shakespeare? A case can be made that it was his acute understanding of rhetoric that makes so many of his plays and poems unique, complicated and challenging. The art of rhetoric flourished as the mainstay of educational theory and practice in England throughout the 16th century and well into the 17th.

Students learned inventio, how to be varied, interesting and accomplished in their presentation of arguments, employing clever tropes and devices that made striking comparisons and startling juxtapositions; reinforcing points through particular emphasis of language and gesture; judging how an audience would react to an argument and tailoring its style accordingly; and knowing when to be brief and when to be expansive. When “invention” started to assume its modern definition, as “discovering or devising new ways of doing things for the first time” rather than “uncovering something already there”, the art of rhetoric was dying.

Quentin Skinner’s towering reputation is primarily in the field of early modern political history, and he has long argued that rhetoric is the key that unlocks our understanding of historical movements and schools of thought. He has now turned his formidable learning to Shakespeare, to show how an understanding of rhetorical culture will illuminate the ways in which we read the plays and poetry. Prof Skinner acknowledges that Shakespeare was interested in rhetoric throughout his writing career but makes a powerful case that he was particularly engaged with the subject immediately before and after the accession of James VI, in 1603, producing what might be termed “the forensic plays”, in particular Othello, Measure for Measure and All’s Well That Ends Well. There were so many manuals explaining how rhetoric worked and how it might be practised that it is almost impossible to attribute particular sources to Shakespeare, who may have assimilated techniques in all manner of ways. Even so, Skinner wonders whether Shakespeare reacquainted himself with the classic manuals and their Renaissance versions during this period in order to produce the most intense and intriguing dramatic conflict on stage.

Forensic Shakespeare guides the reader through the play as a rhetorical argument in a series of chapters using examples to illustrate each point. Three chapters explore various beginnings (open, insinuative and failed); the next three explore the narrative that follows and the confirmation of the case then required; the final two examine the nature of proof and the appeal to shared commonplaces used to substantiate arguments.

Skinner shows how consistently Shakespeare is interested in “dramatizing situations in which a defendant who firmly believes in the honesty of his cause nevertheless finds himself confronting a judge who is hostile or suspicious”, a central feature of rhetorical manuals. The unpromising situation can be turned to the speaker’s advantage. In Julius Caesar Brutus uses an overconfident sequence of elaborate patterns and self-praise when defending Caesar’s assassination to the crowd – which, however, seems to work quite well, leaving Caesar’s friend Antony to face a hostile audience. Antony cunningly uses the figure, paralipsis or occulatio, implanting a picture in the audience’s mind by pretending not to want to say something while making sure that the message is clearly insinuated. When Brutus speaks, the word “honest” describes a decent republican acting for the good of the state; by the time Antony finishes, the same word means hypocritical murderer.

Shakespeare invested a lot of intellectual effort in this word and returned to its significance in Othello. In a fine analysis Skinner shows how Iago’s apparently baffled echoing of his general while they are discussing Michael Cassio has its origins in rhetorical manuals, showing how even apparently straightforwardly naturalistic sections of dialogue are based on theories of speech:

OTHELLO Is he not honest?

IAGO My Lord, for ought I know.

OTHELLO What does thou think?

It is easy to see why this helps to drive poor Othello mad. Iago is employing the figure of mimesis, “a form of imitation in which we repeat the exact words of another person”.

Elsewhere Shakespeare shows rhetoric functioning in more hit-and-miss ways. No one can seriously be impressed by Polonius’s long speeches in Hamlet, which continue long after his listeners have articulated the extent of their suffering. Although he boasts of his knowledge of the rhetorical arts, Polonius, as Skinner wittily observes, “is no longer able to remember what he learned”, a good memory being vital for a successful orator.

Tailoring a speech to the expectations of an audience often requires brevity rather than prolixity, and Polonius, breaking all the rules laid out in the rhetorical manuals, loves the sound of his own voice. But he manages to succeed at times against all odds, persuading Queen Gertrude that Hamlet’s madness is probably the result of his lovesickness for Ophelia.

Skilful rhetoricians were adept enough to adapt to circumstances and to make use of nonverbal aspects of particular situations. The quick-thinking Iago is able to dupe Othello through the prop of a handkerchief that Othello believes is “ocular proof” when it is no such thing, because no crime of adultery has been committed, and, therefore, there is no proof of anything.

He is also able to convince onlookers that Bianca must be guilty of some crime when she witnesses Roderigo wounding Cassio, her beloved, because “she is pale, aghast, and speechless, all well-known signs of culpability”, whereas the audience knows that they might react similarly in the same situation.

Forensic Shakespeare is a powerful and important book. Readers might wonder at times whether plays can really be read quite so strictly in terms of rhetorical orations, and some might wish that Skinner had attempted to explain why Shakespeare paid such close attention to rhetorical techniques and argument at this stage of his career. Nevertheless, we should be grateful for this generous and helpful guide, which goes a long way towards explaining how Shakespeare’s literary genius works.