Red Birds review: zoning in on the absurdity of war

Mohammed Hanif, author of A Case of Exploding Mangoes, brings a Kafkaesque doubleness of purpose to a story of war 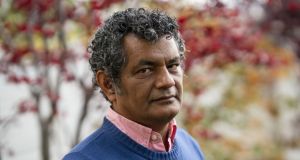 In Mohammed Hanif’s third novel Red Birds, US Air Force Major Ellie despairs of mission simulations being “dreamt up by some kid who’d never seen the inside of a cockpit”. Readers of literary fiction about war, if not of fiction in general, may feel a similar despair. Does the writer have enough authority to make their simulation convincing? Before Hanif was a Booker-longlisted author, or wrote for the New York Times and BBC, he trained as a pilot in Pakistan’s air force. What Major Ellie says about ejector seats and fireproof suits has the confidence of truth. But much more importantly, Hanif knows about the absurdity of war in a way that a civilian never could.

Ellie has been sent on a mission that is simply an “opportunity” to perform an act of courage that might distinguish him in his “straight line” of a career. It involves bombing a refugee camp in the middle of nowhere, “an outpost in a war that the war itself is not interested in”. (Hanif doesn’t specify the desert location; we feel it is an amalgam of borderlands between South Asia and the Middle East.) But after his plane goes down he is taken in, reluctantly, by the inhabitants of the camp. As he looks to find a way back home, a 15-year-old inhabitant Momo sees his chance to gain access to the deserted neighbouring US base.

A whizz with radios, Momo’s brother worked at this “Hangar”. But when the troops disappeared, so did Bro Ali, with his family believing his father – also on the teat of the Americans – sold him. The savvy Momo, who at 15 comes up with entrepreneurial schemes such as scorpion racing and turning local kites into hunting birds for Saudi royalty, devises a plan. Momo’s dog Mutt makes the third main narrator, viewing the stupidity and futility of human behaviour from the outside.

The wit generally comes in sharp riffs. Momo: “Drugs kill your ambition, unless your ambition is to do drugs.” Ellie: “At first I had thought they were talking about the Mirage fighters, those french contraptions that were handsome beasts, like most things French, but completely useless in a real war, like most things French.” Sometimes these riffs can feel like verbal play for its own sake in the comic mould. A US bomb, for instance, “would turn you into a piece of coal without any of the positive attributes of coal”. Sometimes they’re full of wisdom: “We used to have art for art’s sake; now we have war for the sake of war. No lands captured, no slaves taken, no mass rapes, fuck their oil wells, ignore their mineral deposits.”

There are also the more overt, hyperbolic markers of satire and the comic novel form: Ellie, in training, has taken a “guerrilla gardening module” alongside “Cultural Sensitivity 101”. Aid workers sent to work with Momo during his young life have taught workshops in “Reiki For War Survivors”. These achieve the laughs and winces they are played for, but can distract from moments of realist pathos when they come. They also compete with the more considered, otherworldly metamorphosis that the book undergoes towards its end.

There is a conceit running through Red Birds, of Americans “haunting” the skies. Eventually, we realise this metaphor might have become manifest, though particulars remain ambiguous. Are the only threats to the inhabitants of the refugee camp ghosts of Americans who just want to go home? Is the Hangar – that “rest stop” – their purgatory? Or is the whole set up, in the author’s deliberate geographical vagueness, an afterlife for all war casualties: combatants and civilians?

Because of this ambiguity as to what’s going on, it’s difficult to say how successful the fruition of Hanif’s book has been. What is evident, though, is that something profound has been at work the whole time: a Kafkaesque doubleness of purpose, with one structural absurdity couched within another. We can’t be sure who is alive and who isn’t. But the cycle of war remains yet more baffling. In this Hanif’s riffs acquire weight even as they keep their catchiness: “if I didn’t bomb some place,” asks Ellie, speaking to a USAID worker, “how would you save that place? [...]If I didn’t take out homes who would need shelter? If I didn’t obliterate cities, how would you get to set up refugee camps?”