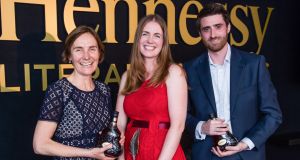 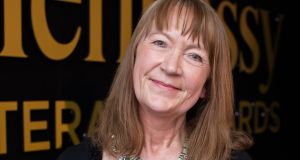 Ríona Judge McCormack has been named the Hennessy New Irish Writer 2016 at the 45th annual Hennessy Literary Awards in Dublin.

Éilís Ní Dhuibhne became the 14th Irish writer to be inducted into the Hennessy Literary Awards Hall of Fame.

“Starting out as a writer can be a terribly lonely experience, full of self-doubt,” Judge McCormack said. “Opportunities like New Irish Writing are crucial – they tell you someone believes in you, they give you the strength to persevere through the inevitable rejections and low times to come.”

Judge McCormack is the granddaughter of the writer Michael Judge, who died last year, aged 94. His 18 radio dramas for RTÉ and BBC spanned from 1959 to 1997. He also wrote for The Riordans and Glenroe as well as 14 original screenplays. His play, Death is for Heroes, was the first in the new Abbey Theatre building in 1966.

“My lovely grandad was a big part of my inspiration to begin writing, and always an extremely supportive reader of my stories.”

Judge McCormack has spent nine years working in international development in Ireland, Cambodia and South Africa. She was born in Dublin in 1983, grew up in Skerries and lives in Johannesburg, where she is editing her first novel, a slantways-told story set in the aid world.

Jane Clarke won the emerging poetry award for Isobel; The Blue Bible; and Every Tree. Clarke, who was born in Roscommon and lives in Wicklow, combines writing with working as a management consultant.

This year’s inductee, Éilís Ní Dhuibhne, said: “One of the red-letter days of my life was the day in 1974 when I got a letter from David Marcus, editor of New Irish Writing, letting me know that he would like to publish my short story, the very first short story I ever submitted to any publisher. This was the best encouragement a young writer could get. Another red-letter day was the day in 2016 when I got an email from Ciaran Carty, editor of New Irish Writing, asking me if I would agree to being enrolled in the Hennessy Hall of Fame. This is one of the best encouragements an old writer can get. It’s just great!”

The judges this year were Ciaran Carty and bestselling writers Paul Perry and Hugo Hamilton, both former Hennessy winners.

Time of the Magicians: Masterclass on four giants of Germanic thought
Real news has value SUBSCRIBE