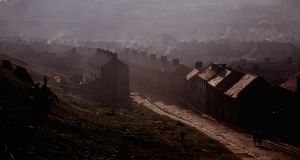 Despite his acknowledgement of Derry’s many problems in 1961, the place enters Nairn’s imagination, describing it as “one of the most unexpected and paradoxical of our cities. For every hundred Englishmen who know York and Chester, how many know Derry?” Photograph: Getty Images

When the renowned architecture writer and broadcaster Ian Nairn visited Derry more than 50 years ago, the title of his essay was both concise and reflective of his ever-present pragmatism. “Proud Derry” was the summation of his feature on the North’s second city, written in December 1961 for the Listener magazine; a series then collected and updated several years later in a volume called Britain’s Changing Towns.

Much of Nairn’s work has long been out of print but thankfully this anthology is available again in a beautiful copy published by Notting Hill Editions. Something resembling a Nairn revival is afoot as well, with a book on the irrepressible writer released by Gillian Darley and David McKie (Words In Place), while BBC4 ran an entertaining programme detailing his life.

If there were only rags to wear (here), they would be worn with a swagger

Nairn’s ruminations on Derry are wonderful to read. He must have felt comfortable there: Nairn did not suffer fools and was always direct in his manner and writing. When he visited a place, he not only studied the bricks and mortar surrounding him, but he concerned himself with the heartbeat of somewhere too, visiting the shops and pubs and getting to know local people. How else could he have come up with this nugget about an economically choked Derry, which nevertheless was continuing to breathe with some degree of dignity: “If there were only rags to wear (here), they would be worn with a swagger.”

Nairn wasn’t being blithe in writing this. He understood the turbulent history and tough topography of Derry – a border location suffering from the effects of partition; a divided community; a port town hit hard by the shipyard closure in 1924; and a place long forgotten by London, despite its strong Plantation links and the original idea of Derry being a “little-London-in-Ulster”.

In his essay, Nairn gives the powerbrokers an angry blast of his horn: “if the experts at the Treasury were forced to live in Derry for six months to experience the exact result of their abstract fiddlings with the Bank Rate, it might be a very good thing”. A similar charge could easily be made today, as Dublin and London-centric politicians and financial analysts trumpet an Irish and UK-wide recovery, which in reality seems to have stalled outside Howth and Watford.

Despite his acknowledgement of Derry’s many problems in 1961 – high unemployment, lack of investment, its remote location, and a frosty relationship with its privileged cousin Belfast (what has changed, you may ask?) – the place enters Nairn’s imagination, describing it as “one of the most unexpected and paradoxical of our cities. For every hundred Englishmen who know York and Chester, how many know Derry?”

It is significant that Nairn places a pre-Troubles Derry firmly within the UK (our city) yet never reverts to the Anglicised title of Londonderry. Instead, his recognition of Derry’s English character is more nuanced: he sees it in buildings such as St Columba’s Church, with its “cockney” details which “hammers home the London connexion”. Other buildings and places he notes with appreciation include Bishop’s Gate (“compact, tough design”), the “suavely done” Walker’s Column (which was permanently damaged by an IRA bomb in 1972) and the residential St Columb’s Wells, marked out for how a city can work for people first and foremost; keeping social patterns intact, or as Nairn wanted, “the crazy human touch”.

Nairn coined the term “subtopia” when he made his first splash in the 1950s with the Architectural Review in a special issue titled Outrage, in which he railed against the “steamrolling of plane into one mediocre pattern”. Pugnacious from the outset, he started writing for the Observer, Daily Telegraph and the Sunday Times, with his searing prose shaking the town-planning establishment with articles such as “Stop The Architects Now”.

It is little wonder that he is not widely read by architects and that this book is his first to be in print since the 1980s (Nairn’s London, meanwhile, is his masterpiece, and will bring you to love this sometimes heartless metropolis). Along with his vivacious, and frequently funny writing, his outsider status is also probably the core of Nairn’s appeal: no architectural training, no public school, no Oxbridge. He looked at and recorded this art form (and profession) with new and uninhibited eyes. Nairn wanted preservation on the one hand, yes, but engaging modern architecture too, while reputations meant little to him, as he travelled from place to place by train or in his tiny convertible Morris Minor.

Getting back to his essay on Derry, Great James Street also suitably impressed him, as did Clarendon Street (“elegant and stately as anything in Dublin”) with their buildings decorated with distinctive doorcases and fanlights. However, he reserved his highest praise for Derry’s Court House, “Derry’s best Georgian building”, he writes, marking out the white sandstone brought locally from Dungiven to build it in 1817.

Nairn was an enthusiastic imbiber and, although the habit was eventually his undoing (he died of cirrhosis of the liver aged only 53) he was a solid believer in the role the pub had to play in society; just as important to the local fabric as the corner shop, the local bank branch or the butchers. A pub is a place “to shake off loneliness without being in anyone’s company” was his melancholically, typically poetic judgment. Sadly his thirst was not sated in Derry, with Nairn bemoaning the lack of pub decoration compared to Belfast (particular appreciation is given to the Crown Bar) and the problem is little rectified today, had he the opportunity to visit, with few pubs giving little sense of history. In fact, a few of them feel like they’ve been cobbled together over the course of a weekend. Another great void in the city is the long-departed Café Nobile on the Strand Road, a place that surprises Nairn with its “high-backed dark wooden benches and marble-topped tables”.

Nairn wrote about the lack of many new buildings to look at in Derry in 1961. However, he does give reference to Altnagelvin Hospital (designed by Yorke, Rosenberg and Mardall, creators of the original Gatwick Airport Terminal). He recommends that the building is best seen coming from Belfast, with his usual tuneful phrasing: “the eastern front, square-on in the morning sun fixes you with its complicated skip of balconies as a good jazz rhythm would…”

Summing up, Nairn captured the strong soul of Derry and how its practical problems forged much of what is likeable about the place: it is a town displaying something approaching good grace in the face of adversity. It’s worth quoting him in full here: “a less proud place would have had its spirit broken under its crippling topographical disadvantage. Derry needs help, and its pride is not the false variety that would scorn assistance.”

Nairn returned to Derry in 1967 to find that little had changed although he does refer to the developments in “Irishtown” (the Bogside as it’s better known) and the large rebuilding operation, taking place at the time. The final thought of his essay proved he was no great reader of the political wind blowing round the buildings he was weighing up: “the tension has lessened: the six and twenty-six counties may have begun a slow growing-together.”

Nairn seemed blissfully unaware how the system of gerrymandering was rotting the heart of the city at the time. In his defence, considering how quickly the Troubles erupted, he was not the only observer caught on the back foot and any foundations of fraternity Nairn had found in ’67 would depressingly crumble over the coming years. But if he was alive and returned to Derry today, one would hope that he could see some of the invisible scaffolding – the people – helping the Maiden City get up off its knees, in order to stand tall once more.
NJ McGarrigle blogs at thehuzzingsea.wordpress.com

‘After Blackadder, for the first time in my life it was dead easy to get in the door’
Real news has value SUBSCRIBE