Eric Hayward introduces Ludovico Ariosto’s epic, which helped inspire Don Quixote and whose translator Sir John Harington read it to the Earl of Tyrone hoping to pacify him 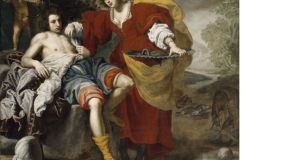 Angelica and Medoro by Lorenzo Lippi, a scene from from Ludovico Ariosto’s poem, Orlando Furioso, written 500 years ago

This year we celebrate not only the Easter Rising but also a rising of quite a different sort. Five hundred years ago the chariot which had borne the undead Prophet Elijah to heaven from the banks of the river Jordan (see 2 Kings 2.11), rose up once again, this time from the Garden of Eden (which, as everybody knows, lies atop a mountain in Ethiopia), to bear Astolfo Prince of England to the moon, where he was greeted by St John the Evangelist who, having fed and pampered him, brought him to the Valley of Lost Things, where everything is to be found that is lost on earth, especially human wits and common-sense (for are we not all lunatics?).

Astolfo was on an urgent mission. Paris was under attack by the forces of Islam and Astolfo’s cousin Orlando, the only person who could save the city and rescue Christendom, was out of his mind (furioso) because Princess Angelica, the most beautiful woman in the world, shunning his alpha-male charms in defiance of the laws of chivalry, had fallen for a pretty Mr Nobody. So Astolfo gathered Orlando’s wits in a flask, returned to earth, and in due course gave them back to their rightful owner. And thus was Christendom saved.

But it was not just Orlando’s grasp on reality which St John aimed to restore. It was also that of all of us who live in a world we struggle to comprehend and are unable to control. Boasting to Astolfo that he knows what he is talking about since in life he was a writer – and a successful one at that: “above all others I made a gain that neither time nor death can take from me, and it was right that Christ by me so praised should pay me back for such a stroke” – St John reveals to him, and to us, the truth about the (hi)stories through which we seek to give meaning to our lives: “if you want the truth not to be hidden from you, change the story to its opposite: that the Greeks defeated and Troy victorious was, and Penelope a whore.”

In other words every (hi)story is a lie. But if it is a writer of (hi)stories who says so, does that mean he is lying when he tells us so? In which case (hi)stories actually tell the truth. So St John is right when he says they lie? And that the Bible was a good investment, even though it too is a lie?

All this of course is not the opinion of the real St John, but of Ludovico Ariosto (1474-1533), one of Italy’s greatest and most engaging writers, whose poem Orlando Furioso, where the moon rising takes place, first saw the light of day in 1516, in Ferrara, the capital of an independent state in northern Italy which, under the Dukes of Este, had become one of the leading cultural centres of the Renaissance. The work was to enjoy enormous popularity, throughout Europe, and in the English-speaking world its success owed not a little to Ireland. It was translated into English, for Queen Elizabeth I, by her godson Sir John Harington (the inventor of the flush toilet!), who undertook the translation even as he was involved in the plantation of Munster and who later, under James I, traded on the fame it had earned him to try and have himself appointed Archbishop of Dublin and Lord Chancellor of Ireland. The move was unsuccessful, as had been his attempt, in the late 1590s, to pacify Elizabeth’s foremost Irish enemy, the rebellious Earl of Tyrone, by reading him passages from Orlando Furioso, but at least his translation was to stand the test of time and to this day it remains entertainingly readable.

Ariosto would no doubt have smiled at Harington’s endeavour to barter literary success for the good life. He himself had done the same. He was a reluctant courtier, whose dream would have been to lead a quiet existence in his beloved Ferrara, wielding the pen and being in charge of court entertainment, in what was the birthplace of modern theatre. He did at least manage to avoid being sent to Hungary in the retinue of the Duke’s haughty sibling, Cardinal Ippolito d’Este, who had been appointed to an archbishopric there and was a cleric made in the typical mould of Renaissance churchmen, having had his brother’s eyes gouged out because the woman they both loved had said how beautiful they were.

Ariosto, however, was not able to avoid being appointed governor of the Duchy’s wildest and most remote province, the Garfagnana, now in beautiful northern Tuscany, not far from Lucca. He carried out the job competently enough, but he hated the place and wrote unflattering words about its inhabitants, who still have not forgiven him. In the region’s capital, Castelnuovo di Garfagnana, there are several monuments to Cervantes but none to Ariosto. Though that may well be a roundabout way of honouring Ariosto, since Orlando Furioso was a major influence on Don Quixote.

There is no tilting at windmills in Orlando Furioso, but there is “quixotism” aplenty. Like Don Quixote, all Ariosto’s knights, whether Christian or Saracen, are driven by Wanderlust (and other lusts too) and all are moved by a warped sense of honour (which they usually equate with the chastity of their beloved … but not their own, of course). All would rather fight duels than fight for their faith, and any excuse is good enough for a duel: rival claims to a horse, a helmet or a woman (usually in that order), saving damsels in distress (often by inflicting still more distress on them), punishing villains (who can be of one or the other faith, though on balance there are probably more Christian than Saracen villains in the poem), or simply crossing a bridge (which typically has the width of no more than one knight in shining armour). Unfortunately for the knights some of the best fighters in this mad world are actually women, who often make a better job than men of donning armours and who on the whole do not think very much of manly methods of distress-relief. There is only one knight in the entire poem who does not put a foot wrong when offering succour to a damsel in distress: Orlando’s childhood friend Oberto, King of Ireland.

That, though, is not the main reason for reading this highly amusing poem. What makes it particularly appealing to a modern audience is the personality of the narrator. Ariosto, with what has come to be seen as his hallmark irony, dramatises the whole process of story-telling, drawing parallels between his own woes and those of his characters, addressing and teasing the reader, offering comments on the stories he tells, comparing the “mythical” world of knights and damsels to the “real” world he (and we) inhabit, and above all inviting us to reflect on and be shocked and amazed by what is happening around us: the senseless wars, the incompetence of rulers, the selfishness of the mighty, the duplicity of the church, the cruelty of fate … the beauty of life, the wonder of love, the magic of art.

Eric Haywood is senior lecturer in Italian studies at University College Dublin. The Italian Institute of Culture in Dublin will be holding a series of events in April, starting with a lecture by Eric Haywood on April 6th, to celebrate the 500th anniversary of Orlando Furioso