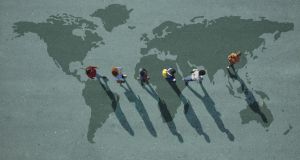 Kimberly Clausing’s central argument is that rather than blaming foreigners for the ills of society, policymakers should tackle the root causes of stagnant wages and economic inequality.

For all the often-justified criticism it attracts, globalisation has undeniably lifted hundreds of millions out of poverty over the last four decades. International trade and investment have been central to the rise of China and many more emerging economies. Immigration, meanwhile, has allowed tens of millions more to escape oppression or abject poverty. Among advanced economies, Ireland has been unarguably one of the big winners.

At the same time, globalisation has been blamed for premature deindustrialisation, rising inequality, stagnant wages, financial crises and, at least in part, the emergence of populist politics at both ends of the political spectrum. A cottage industry of worthy tomes has emerged to explain this phenomenon, epitomized by Brexit and the election of President Donald J Trump. Such a political backlash has yet to land on Irish shores, but as one of the most open economies in the world, we stand in the cross-hairs.

Aimed squarely at self-declared “progressives” in the US, Kimberly Clausing’s new book is an apparent attempt to influence debate within that country’s Democratic Party as it selects its standard bearer to take on Trump in the 2020 presidential election. While acknowledging the need to improve trade, investment and immigration policies, and to introduce a range of other policies to mitigate any negative impact of globalisation, she warns against the temptations of rejecting economic openness.

The author highlights the growing consensus among economists that technological advances have had a greater negative impact than trade on lower-skill jobs and income inequality – robots rather than imports. This is not to say that trade has no negative effects on individuals or communities, merely that societies as a whole are better-off, generating enough resources so that those who lose out can be compensated and every individual thereby be better-off. The author goes further, however, in implying that societies would be better-off even if this compensation didn’t take place (and it doesn’t, or at least not fully).

Clausing is an acknowledged expert on multinational corporations and their taxation. It is on this theme that her analysis is deepest, her critiques most cutting, and her policy proposals most developed. Chiming with the recently published European Parliament report which called out Ireland as a tax haven, the author uses similar language and dedicates a segment to the European Commission ruling that Apple should pay the Irish Government €13 billion in back taxes. Her proposals for unilateral and fundamental reforms to the US corporate tax regime would no doubt reduce the incentive for US firms to shift their profits overseas – meaning less corporate tax revenue for Ireland.

It is on immigration that Clausing is most effusive. While international trade and investment create winners and losers, the author sees little evidence that immigration creates clear losers. Even studies showing a harmful impact on low-skilled workers or secondary school dropouts are contested, while the benefits to the high-skilled and to immigrants themselves are beyond doubt. Cultural concerns are brushed aside.

The central argument of Open is that rather than pandering to populist impulses by blaming foreigners for the ills of society and shooting ourselves in the foot in the process, policymakers should instead directly tackle the root causes of stagnant wages and economic inequality. Rather than being as bold as the author seems to think, her proposed policy responses are a bare minimum that progressives should view as necessary for “a more equitable globalisation”: better education, investment in infrastructure, community-centric adjustment funds, a more progressive tax system, funding for scientific research and using competition policy to address concentrations of market power. She leaves unexamined, however, truly bold policy ideas like universal basic income. She laments the reduced bargaining power of workers and their trade unions but pays only lip service to redressing the balance.

Clausing’s writing is fluid, engaging and accessible to the non-specialist. As such, it is a worthy contribution. In her eagerness to persuade, however, the author has a tendency to verge into hyperbole which could come across as tone-deaf to the very people she is trying to convince. At times, she risks excessive reductionism, as when calling on readers to imagine a self-sufficient Finland engaging in zero trade.

Despite Ireland being more “open” than either the United States or the United Kingdom on most conventional measures (trade in gross domestic product, foreign direct investment stock in GDP, foreign born share of population), partly due to its small size, we have not yet been afflicted by the political angst that precipitated Brexit or the election of Trump. Perhaps, this is due to Ireland’s economic “coming of age” since the early 1990s at a time – and partly a result – of increased global openness. Although Ireland has seen increased inequality, this has not been coupled with stagnant wages nor with a sense of loss of former glories. Clausing’s Open is a reminder not to be complacent.

Victor Duggan is an economist based in Mexico City