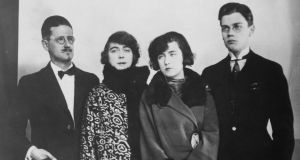 I had the pleasure of a pilgrimage to Dublin one year for Bloomsday, replete with the requisite pint at Davy Byrne’s, soap from Sweny’s and a Sandycove swim. James Joyce set Ulysses on June 16th, 1904, as a tribute to the day he first “walked out” with Nora Barnacle. In her fifth novel, Nuala O’Connor recounts Nora’s life from that fateful rendezvous. A portion of Nora first appeared in Granta as a short story, Gooseen, which won the 2018 Short Fiction Prize.

Joycean Dublin is well-trodden ground, not least by Edna O’Brien, but O’Connor keeps the story fresh with the vivid language of her fictionalised biography. A chambermaid from Galway, Nora’s voice is frank and earthy. “The river smells like a pisspot spilling its muck into the sea,” she tells Jim as they walk along the Liffey.

6 No Irish howlers, but Prince Philip’s body language with McGuinness told a story

8 How to build a modern man: Helping boys to grow up happy

9 ‘I’m cheating on my husband with a married man – can we ever trust each other?’

11 Ireland’s Generation Rent: ‘After 12 years renting, I’d like my own front door’

17 Warmer weather to coincide with lifting of 5km travel restrictions

18 Even better than the real thing: Escapist holidays in Ireland

19 Aidan Turner: ‘That photograph. Yeah. It took away from the work’

20 Fintan O’Toole: I got a mortgage at 24 – unthinkable for today’s young adults

22 Trust trumps Zoom for Terry Hyland and his Leitrim exiles

25 Coronavirus: 14 further deaths and 455 new cases reported in the State

27 David McWilliams: A female-led economy is coming – and it will be better

30 US Masters: Hideki Matsuyama shines after the rain to take control

34 Leadership at issue as Fianna Fáil eyes prospects after pandemic

39 Independent butchers are one of Ireland’s culinary treasures

40 The Mary Wallopers: ‘Folk was never supposed to be safe’