No police, no body: why cruise ships suit the perfect crime

Nearly 200 people have vanished from cruise ships this century, but arrests rarely follow 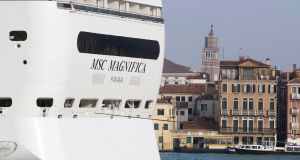 “Saw this and thought of you,” the email’s subject line read. In it was a link to a recent news report about Dublin resident Daniel Belling, who had been arrested over his wife’s disappearance from a cruise ship in the Mediterranean.

The story surfaced again this week with the discovery of a body at Rimini on Italy’s Adriatic coast. The body turned out not to be that of Belling’s wife, Xiang Lei Li, who was reported missing in February following a 10-day Mediterranean cruise. Belling remains under arrest in Rome, on suspicion of having killed his wife during the cruise.

My first thought was that I should brace myself for more messages telling me that the plot line of my novel appeared to be unfolding in real life. My second was that I’d have dismissed this case as being too unrealistic for fiction, because the aftermath of cruise-ship crime rarely involves arrests and criminal charges. There are, effectively, no police at sea.

Before I became a crime writer, I worked in hospitality. As a receptionist at a 2,000-room Disney World hotel, as a courier on a French campsite and as the voice on the other end of a tour operator’s customer service line.

Sometimes holidaymakers came to me as victims of theft, reporting money or travel documents stolen. Sometimes it was something much worse than that. I could always pick up the phone and get help, from the Orlando police department, la police nationale or our own gardaí. But what happens when you find yourself the victim of a crime that has occurred in no country at all?

In practice, this means that if you awake in your cabin to discover a member of your party has gone missing in the night, your help is going to come in the form of a police officer from a nation potentially thousands of miles away.

A cruise ship sailing in international waters is governed by the rules of maritime law, which state that the authority on board is that of the country where the ship is registered. Cruise ships, however, tend to be registered under “flags of convenience” for tax purposes, typically the Bahamas, Panama and Libya.

In practice, this means that if you awake in your cabin to discover a member of your party has gone missing in the night, your help is going to come in the form of a police officer from a nation potentially thousands of miles away.

While you wait for him to travel to the ship, professional housekeepers unwittingly clean crime scenes. Witnesses disembark and go home. Until a person is reported as missing, the ship continues to move away from where the incident occurred, widening the search area until the recovery of any body becomes impossible.

Nowhere is the ineffectiveness of this system more apparent than in the case of British woman Rebecca Coriam (24), who disappeared from the Disney Wonder in 2011. A crew member, her absence was noted when she failed to report for her shift on the morning of March 22nd.

A cabin steward noticed Merrian’s absence on the second day, but it appears not to have been officially acknowledged, so chocolates piled up on Merrian’s pillow.

A single Bahamian police officer, Paul Rolle, travelled to meet the ship in Los Angeles and investigated the case. This was despite the facts that Coriam was British, that the Disney Cruise Line was domiciled in London, and that the incident took place somewhere between the United States and Mexico.

Rolle concluded that Coriam had been swept off deck five by a rogue wave. The last CCTV images of her were captured four decks below, talking on the phone and looking upset, and her credit card was used two months after her disappearance. Six years later, her family are still searching for answers.

Nearly 200 people have disappeared from cruise ships since 2000. The website of the International Cruise Victims organisation (ICV) records each one. It was founded by an American, Kendall Carver, whose own daughter Merrian (40) disappeared from Royal Caribbean’s Mercury during an Alaskan cruise in 2004.

A cabin steward noticed Merrian’s absence on the second day, but it appears not to have been officially acknowledged, so chocolates piled up on Merrian’s pillow.

When the ship docked, the crew removed her belongings, later donating them to charity. The ICV, with Merrian’s father at the helm, has since lobbied US lawmakers for better safety at sea. Since 2010, the FBI has jurisdiction over all crimes against Americans that take place on cruise ships, regardless of the vessels’ location or registration.

German man Daniel Belling (44) and his Chinese-born wife, Xing Lei Li (36), lived together in Clare Hall, Dublin, with their two young sons. On February 9th last, the family boarded the MSC Magnifica in Civitavecchia, Italy. She was last seen the following day, February 10th, by a cashier in one of the ship’s souvenir stores, who recalled the couple arguing.

But know also that if you sail through international waters, you have, in effect, travelled to a country where there are no police.

Cruise lines keep accurate manifests by requiring all passengers to swipe their assigned “cruise cards” every time they board or disembark; there is no record of Xing Lei Li ever having left the Magnifica with hers. When the crew realised this, they contacted Italian authorities, who intercepted Belling at Rome’s Ciampino airport. By then, Xing Lei Li had not been seen for more than a week.

My novel is about a series of murders that take place on a fictional cruise ship. The most common reaction to it is surprise that I didn’t make it all up, that maritime law truly does work this way.

In the eyes of the average holidaymaker, a cruise ship is a sunny, cocktail-soaked dream, teeming with water slides, bottomless buffets and endless entertainment options. The worst things that can happen to you fall somewhere on a spectrum between Norovirus (the winter vomiting bug), which you can take steps to avoid, and a disaster such as the one that befell the Costa Concordia, which is extremely unlikely.

But know also that if you sail through international waters, you have, in effect, travelled to a country where there are no police.

When my publisher was promoting my book, someone pulled a quote from it to stick on the review copies. “What’s a missing person minus a body? Not a murder, oh no. Never a murder. It’s a disappearance.”

Shortly after Belling’s arrest, his lawyer asked reporters: “If this is a murder, then where is the body?”

Belling maintains that his wife is a missing person who left the Magnifica of her own accord, and that authorities should be actively searching for her.

Truth can be stranger than fiction – and, when it comes to cruise-ship crime, at least as chilling as fiction.

Catherine Ryan Howard is the author of Distress Signals (Corvus)

Jeanine Cummins: ‘I didn’t know if I had the right to tell the story’
4