Plus: There is something of Emily Dickinson in the poems of Chris Murray 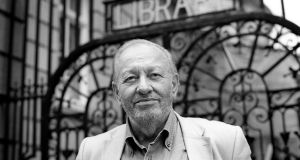 It is a rare thing to encounter a poet whose world one might wish to fully inhabit, or a new book of poems that seems to offer such density and range that it should, by rights, be read and re-read over a considerable time. GC Waldrep, an award-winning American poet, is introduced for the first time to readers here with The Earliest Witnesses (Carcanet, £12.99), a collection of such poise and penetrating attentiveness to the world that it demands an equal attentiveness from the reader.

We begin with American Goshawk, a stunning poem that melds a fractious, vulnerable relation to the body, and to the self, with Waldrep’s trademark assiduity:

This was after the season of the yellow ladyslipper,
these woods’ lone orchid, though I saw their green tread
everywhere, bipedal among the needles and hush.
I was no longer in love with my life, or with anyone’s.

The metrical sensitivity of Waldrep’s lines is evident here and throughout, the music of his verse varied and arresting, turning, slowing and creating spaces for revelations that startle, their simplicity catching us off-guard among the more allusive tenor of the poems.

These are learned texts, sewn through with references, most of which are cited in the body of the poem, but Waldrep is a careful guide, never letting the complexity of his vision slip into obscurity. These are dense, even baroque poems. Nothing goes unnoticed or unconsidered.

The titles give a hint at their steep religiosity: On the Feast of the Holy Infants Killed for Christ’s Sake in Bethlehem. On Hearing a Cuckoo at Pentecost. Nevertheless, Waldrep performs feats of association, elucidating the power of theological thought to transform our ways of looking at the natural world and our relationship to it.

Perhaps Waldrep might best be described as America’s Geoffrey Hill, though his willingness towards vulnerability in an often austere and serious world makes his a tender vision, too: “By which I mean: Gift. It knocks the spirit right out of you, & into someone else.”

Closer to home, the Irish poet Chris Murray is best known for her three book-length poems, The Blind (Oneiros, 2013), She (Oneiros, 2014) and Bind (Turas Press, 2018). In this latest collection, Gold Friend (Turas, €12), also published with the independent, Dublin-based small press, Murray turns to the space of the lyric, often pared down to its bones, though never lacking in musicality or vividness.

There is something of Emily Dickinson in these poems, particularly Because I Did Not Stand Still, with Murray employing the jump between lines, and a restrained punctuation, to establish a heady free-play of images and association.

Though quite the opposite in many ways, as in Waldrep’s work these poems call for a close attention as the reader pieces together the fragmentary sense of the texts. Murray’s poetics call for a bond between the eye and the imagination, and at her best she turns out hallucinatory ways of seeing, conjuring from her images a more expansive metaphorical experience.

Take, for example, the opening lines of Starlings:

Sweet the sun,
to walk up into it –

Gold Friend takes its title from the Anglo-Saxon elegy The Wanderer, the gold-friend being a kenning for a king. Starling also seems to recall the Middle English poem Pearl. The sea becomes an avenue; it has a throat, a self; the “mother” of the bird-call links back to the pearl, but also on to the speaker (Is she a mother? Is something lost calling to her?). And then there is this uplift in the lines, a movement towards heaven, perhaps, or peace and reunion.

Indeed, the acute perceptiveness of Murray’s poetry, her empathic and sensitive vision, is extended first to nature (as in a beetle who carries the “small soil tabernacle” of his home, or a fallen tree whose root-system is intimately exposed), and then, very movingly, into a series of elegies. Lament for a Lost Child, The Rosemary and Sweet Night inter-relate the natural world with loss, so Murray’s work is resonant, restrained and difficult to forget:

Memory insists that I stand on a bank of the River Tolka,
upstream from Socrates
and his garden of roses,
those colours we tasted -

for here is the place
that we committed him
to memory,

that black water,
Glas Naíon,
the stream of the infants

With petals,
With flower-heads.

Last October, another giant of Irish poetry passed away; though, as with Eavan Boland, Derek Mahon also left behind a final collection. Washing Up (Gallery Press) will be followed this year by a new Collected Poems (also with Gallery). Washing Up includes poems written during lockdown (Quarantine, A Fox on Grafton St), but it is in Mahon’s satires, and his sounding of deep time, that this collection shines.

Early on we are introduced to poems set in near and distant futures, written by a poet “who was at peace here in a world ill-at-ease/ with itself”: a “new Atlantis” is imagined “risen from the sea,/ streaming with sea water”. Here, and elsewhere, Mahon alludes to Darwin, to natural selection, to geological and evolutionary time, and it is in these earthly, ecological visions that he finds reconciliation, away from “the twittering world”, its surveillance and its corruption.

Despite being littered with the debris of technology and a sense of unease, the best poems here pull themselves out of the wreckage, reaching upwards while never fully shedding the latent guilt in the poet’s desire to be free. Their rhyme, and their quite daring colloquialisms, ironise the speaker’s longing, as in Real Time:

Jailer, historian and philosopher, you
who keep us under constant close review
around the clock, may we not ever take,
even for a second, a reflective break,
unsupervised, to try “eternal” themes
discredited in these existential times?