Narrative arcs, loops, lines and tangents: a new way to conceive a novel 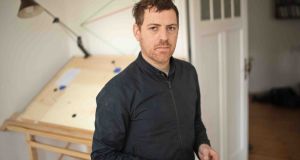 Adrian Duncan: As I wrote I realised the style of writing that emerged was similar to the styles of technical drawing I’d learned in school.

In my first novel, Love Notes from a German Building Site, the narrator, a site engineer called Paul, felt constricted by the confinement he perceived in his profession. While I worked on my second novel, A Sabbatical in Leipzig, I realised the narrator, also an engineer, was a person who had enjoyed the narrowness of his discipline and enjoyed where this narrowness could lead his thoughts.

A Sabbatical in Leipzig is told from the point of view of a retired Irish bridge engineer called Michael Pura. He lives alone in Bilbao, and over the course of the book we spend an hour or so with him in that quiet part of the day between his last coffee of the morning and before he leaves his apartment for the afternoon.

His habits are narrow and obsessive and include such things as listening to two versions of the same piece of music one after another, watering his flowers, honing a translation of a short story by Robert Walser into English, thinking back to a troubled period of time when he lived in Leipzig with his now-deceased girlfriend Catherine, and preparing himself for his daily visit to an arrangement of huge steel sculptures installed in the nearby Guggenheim Museum.

The novel was written over five weeks during April/May 2018. I wrote in a concerted burst once I’d learned that the Lilliput Press had accepted my first novel. I’d spent five years working on Love Notes and the release from finding a publisher for it fed into the energy that brought the second book into being. After struggling for a while on one piece, there is a sort of build-up that can release into the next work and here decisions can often come more easily. A friend, writer Cathy Sweeney, remarked to me, “Oh, you got one for free”.

I understand Michael’s habits through a prism of my own activities and attitudes. Writing is a habit for me, but it is also, and perhaps more so, a tool that enables me at once to bring a world into being while at the same time to set about exploring its nature, probing its extents, probing its possibilities. I realised as I wrote the novel that much of what was appearing in Michael’s mind were ideas and images that fascinated me during my mid-teens.

I was brought up in a large family in a Bungalow Bliss-era house on the outskirts of a small Midlands town called Ballymahon. To the front of our house was a busy trunk road and to the rear, acres of open farmland.

In the evenings, for an hour or so, I used to take to our neighbour’s back field and strike golf balls with an old seven-iron that once belonged to my father. Then I would walk after them, collect them, and strike them back down the field.

I believed at the time that I was trying to become a good golfer, but the more I think about it now, I was simply more interested in witnessing as often as possible the sight of an object arcing beautifully in the sky. I think this was my first artistic act, or one of my first real aesthetic experiences – striking, over and over, seven-irons towards an imagined target in a field sparsely dotted out with sheep.

Then, in the late evenings I would spend hours working on my technical-drawing exercises. This course taught me a new set of tools for representing types of reality and for manoeuvring around and projecting seemingly simple states of affairs – a triangle penetrating another triangle, a pyramid being speared by a cylinder, a circle rolling along an arc and opening out (disintegrating) as it does so. It’s only in the last few years that I have come to realise the magic in that course and how lucky I was to be exposed to such thinking so young.

Within my writing habit lies in almost equal measure a sense of fascination, distraction and delusion. These things seem at the same time inherent and necessary to the habit. They are the sorts of fascinations that I found myself tapping into as I brought Michael, the narrator of my novel, into being.

As I wrote I realised the style of writing that emerged was similar to the styles of technical drawing I’d learned in school. Each section of the novel is a composition that could just as easily be a drawing as it is a series of sentences and paragraphs. Now I see some sections of this somewhat ekphrastic text as loops, some as straight lines, some as asymptotes, arcs, chords, tangents.

Michael’s one-bedroom apartment in Bilbao is of the same layout as my apartment in Berlin. I wrote the book based on my moving from my kitchen to my sitting room and back. After three weeks of writing, my girlfriend, Niamh, said to me that if this novel is based in Bilbao, then I really ought to go there.

I had been in Bilbao only briefly once before and had not remembered enough to bring that experience to the page. Luckily, though, in early 2019 I received a visual-artist bursary from the Arts Council so I decided to dip into that fund for my return trip to Bilbao.

While there I made the decision to navigate the city as if I were Michael and because he is a person in his mid-to-late seventies there emerged certain routes I could not take and some that I knew he would. I realised also that he would find the bridges in Bilbao fascinating, so I carried out a structural survey of each one and by getting to know these bridges I got in turn to know him better. In doing this I found what part of the city he would live in and what route he would walk each day, what the light would be like, what he would eat and drink, where he would rest.

In short, by tracing these fictional lines through the city it opened up facets of him to me and from this I was able to return to the writing of the book and the imagining of this person, and in some way present his thoughts.

When I begin to write, what I usually have in mind is some sensation, or image, or some sentence that I feel needs to be put onto a page in some way – the themes being discernible only after the work is done, perhaps not unlike Michael looking back on his life’s work.
A Sabbatical in Leipzig is published by The Lilliput Press