Poet Blake Morrison talks about 'An Irish Airman Foresees His Death', his favourite of Yeats' poems 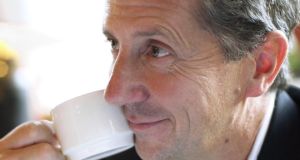 Why Blake Morrison chose this poem
“I think it’s better that in times like these / A poet’s mouth be silent,” Yeats wrote, and he criticised Wilfred Owen for making passive suffering a theme for poetry. Fortunately, far from keeping his mouth shut during the first World War and the War of Independence Yeats wrote his greatest poems then. A resigned yet positive tone defines this one. Neither bellicose nor pacifist, the airman acts for himself (his motivation “a lonely impulse of delight”) rather than for country or tribe. The control of the verse form is immaculate, especially those last four lines, which, in their rhythm, rhyme and syntax, beautifully enact the idea of balance.
Blake Morrison’s latest collection of poems, Shingle Street, has just been published by Chatto & Windus

An Irish Airman Foresees His Death

I know that I shall meet my fate
Somewhere among the clouds above;
Those that I fight I do not hate
Those that I guard I do not love;
My country is Kiltartan Cross,
My countrymen Kiltartan’s poor,
No likely end could bring them loss
Or leave them happier than before.
Nor law, nor duty bade me fight,
Nor public man, nor cheering crowds,
A lonely impulse of delight
Drove to this tumult in the clouds;
I balanced all, brought all to mind,
The years to come seemed waste of breath,
A waste of breath the years behind
In balance with this life, this death.