My favourite: "The man who set up office in the Ladies"

The Maeve Binchy article selected by Róisín Ingle, editor of ‘Maeve’s Times’, as her favourite 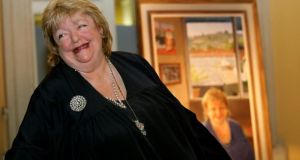 Maeve Binchy: “His colour was very bad and I wished, as I always wish, that I had left well alone, and let him sit there all week if necessary rather than bringing on this distress.” Photograph: Eric Luke

I went into the ladies’ cloakroom of a hotel and a man sat peaceably at a sort of dressing table. The place where you are meant to be a woman and sit combing your hair and adjusting your make-up. The man had his briefcase beside him and he was fairly absorbed in some kind of paperwork.

He certainly wasn’t doing anyone any harm, and I often think that the distinction is fairly arbitrary anyway in cloakrooms. After all, single-sex facilities are available on the Continent and I’ve never been in a private house where they made a distinction, except in one place in Australia where they had ‘Blokes’ and ‘Sheilas’ written on the doors.

It was a perfectly comfortable place to sit: chair, desk and even a mirror to examine himself in if he had any doubts about self-image. He wasn’t taking up too much space, it was easy to sit beside him and adjust your make-up. It was just a small bit unsettling to know what exactly he was doing there.

This was an Irish provincial town, the man must surely have known the ladies who were coming in and out to what was after all their designated area. He had the air of a man who had been there some time. His ashtray had several butts in it. He was a man who had settled in.

There was a box of tissues on the table which he called on occasionally for a nose blow. He seemed quite oblivious of the lavatory flushing and hand washing going on a few yards away from him, admittedly round a corner. This part of the cloakroom was in sort of an alcove. I knew it would be on my mind forever if I didn’t find out. He would join the other unsolved mysteries, like the man who wore a hair roller with an otherwise conservative city gent image; like the Christmas card I get every year signed SLUG; like the man who used to come in to The Irish Times every day to buy yesterday’s paper but not today’s. He said it was because he didn’t actually take it, he wasn’t an Irish Times reader but people were always mentioning something in it that he wanted to follow up, which was why he bought the previous day’s.

My head is too full of these confusing things. ‘Damp old day out,’ I said to him.

‘Is it?’ he looked up politely. ‘It was all right when I came in, but of course it’s very changeable this time of year.’

‘Have you been here for a while?’ I asked, heading off a lengthy and generalised weather conversation.

‘Oh yes, a fair bit, I have to meet someone, but there’s no sign of him; still, I suppose it’s the traffic, getting out of Dublin is a nightmare these days.’

He was going to meet another male in the ladies’ cloakroom of the hotel. This could not be usual practice.

‘Why do you decide to meet here?’ I asked, with all the subtlety of my trade.

‘It’s sort of half way between us,’ he said agreeably. ‘Rather than have either of us drive 100 miles, we both drive 50, harder on him of course because he’s got to get out of Dublin, as I said.’

‘And do you always choose this place?’

He seemed so … helpful. I was sure he’d tell me.

‘No, funnily, we usually go to the other hotel, but someone told us that there was more privacy here, you can have a chat without being disturbed. It’s the divil to get service though, I’ll tell you that. I’ve been here over an hour and nobody’s come to take my order.’

I looked at him fixedly for a few moments. ‘They mightn’t think you were ordering in here, you know, people don’t usually.’

He looked around him mildly. ‘Why not, do you think?’

‘I think that they’d never imagine anyone in the ladies’ cloakroom might want coffee and sandwiches brought in,’ I said.

He stood up like a man who had been shot in the back in a film and was about to stagger all over the set before collapsing. ‘I don’t believe you,’ he said.

I showed him round the corner, where two women were washing their hands, I showed him a line of cubicles and machines on the wall that seemed to prove conclusively where we were. His colour was very bad and I wished, as I always wish, that I had left well alone, and let him sit there all week if necessary rather than bringing on this distress.

‘Mother of God,’ he croaked. ‘Is this where I’ve been all afternoon?’

‘I thought there was a lot of hair combing going on beside me and that women were getting a bit casual about doing up their faces in public. What am I going to do?’ He looked utterly wretched.

I told him that since none of these fiercely combing and titivating women had complained about him to the management, it seemed to prove that there was no harm done, and that women were becoming generally more relaxed about things, which had to be good.

He wanted none of my philosophising. He had bundled all his papers into the briefcase and was looking at me as his saviour. ‘Would you have a look out to see?’ he begged.

‘I wouldn’t know your friend, why don’t you go out yourself?’ I said. ‘I’ll come with you if you like.’

I thought he needed somebody to lean on, he sounded so frail. ‘No, I mean look out in case anybody sees me coming out of the … er … the Ladies,’ he said.

I checked that the coast was clear. It seemed fairly academic, since anyone who had been in had already seen him. But perhaps he was more afraid of being seen by his own sex.

He straightened his tie and thanked me again. He assured me that he was not a mirthless man and he would see the humour of this. Not now, at this very moment, but eventually. I don’t know when he saw the humour of it, but not I think when he found his friend, who was sitting impatiently on his third pot of coffee.

‘What in the name of God happened to you?’ the friend said. ‘I’ve been on to your office, on to your home. I nearly had the guards out for you.’

The man recently released from the Ladies lowered his voice.

‘Was it the car? Did you hit anything?

‘Is it your heart, any chest pains, any pins and needles in your arm?’

‘It’s nothing to do with the firm, no redundancies or anything?’

The man who had been waiting all afternoon looked anxious.

‘No, would you get us a drink, I’ve been all afternoon in the ladies’ lavatory.’

‘Were you being sick?’

‘I’ll get the brandy fast,’ said the man who had been waiting.