To the lives of Mary and Lizzie Burns, we have no guide. These two illiterate Irishwomen, by their actions and associations, wrote themselves into history. Despite, or perhaps because of their lack of historical weight, I adored them instantly and decided to write a novel about them 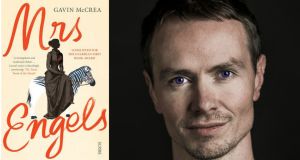 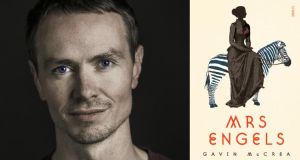 Gavin McCrea: Under Mary and Lizzie’s influence, Engels and Marx developed an affinity with Ireland and expressed support for the independence movement there. Indeed, in his theoretical writings Engels went so far as to speculate whether a successful rebellion in Ireland would precipitate a crisis in the British empire and lead finally to international revolution

In 1842, at the age of 22, Friedrich Engels was sent to Manchester to do a two-year internship at his father’s cotton mill. As intended, this training prepared the young Engels for a career in the cotton industry. Its unforeseen consequence, however – a nightmare come true for his staunchly Calvinist and conservative family – was an awakening of Engels’s class consciousness aided by a love affair with a poor Irish worker.

The Manchester that Engels arrived in was really two towns in one: the working people’s quarters were sharply separated from the sections of the city reserved for the middle classes. A bourgeois mill-owner could live in Manchester for years without ever entering a workers’ district. The commute from his suburban villa to his place of business followed the shortest route through town, along thoroughfares whose elegant shop fronts concealed the squalor of the labouring districts that spread out on either side. Entry fees into the pleasure gardens and expensive omnibus fares to the surrounding countryside meant that his leisure time, too, could be spent in the exclusive company of his own class.

No ordinary mill man, Engels was from the outset appalled by this class zoning. He understood immediately that the topographical partitioning of classes in Manchester was not only the result of pre-existing economic conditions but was, in itself, creating, sustaining and exacerbating those conditions. The way Manchester was designed contributed to a great extent to the shaping of working class and bourgeois experiences, and lent power and legitimacy to the idea that the status quo was natural and permanent. As long as the working people were kept separate from those who paid their wages, they would always appear foreign and incomprehensible, and the idea that they lived as they pleased and did not want things to change remained difficult to question.

This system of segregation horrified Engels, but it was also the feature of Manchester that aroused his interest in the lives of the workers. As soon as Engels saw the boundaries, he wanted to breach them. Once he perceived that he was being denied something, he was eager to encounter it. The workers were the forbidden people, and it was with them that he wished to consort.

To this end he did what few mill men dared to do: he plunged into the slums. In the evening after work, he set off on foot to explore the alleys and courts of the working districts, to knock on doors of cottages and cellars, to speak with the families who lived there. His guide on these excursions was his lover, an Irish worker named Mary Burns. Mary escorted Engels on his rounds, gaining him access to districts and to households which would otherwise have been unsafe for a stranger to enter. Mary was Engels’s source of information about the factory and domestic conditions endured by the working people of the city. She helped to provide him with the material for his nascent communist theory.

In 1850, when Engels returned to Manchester to take up full-time employment at the mill, again he took up with Mary, and they remained lovers until her death in 1863. At that point – or perhaps before – he started a relationship with Mary’s younger sister, Lizzie. He and Lizzie were lovers until Lizzie’s death in 1878. It was through these remarkable sisters that Engels became acquainted with the “undiscovered” working people of Manchester, their struggles, their sorrows and their joys. It was they who gave Engels the confidence to shed his purely bourgeois identity and call himself a communist – the nearest thing to a worker that he could envisage himself being.

Mary and Lizzie are responsible, too, for inspiring Engels’s (and his friend Karl Marx’s) sympathy with the Irish independence movement. As thinkers and as agitators, Engels and Marx were firm internationalists. Capitalism was for them a global order; overturning it would therefore require a revolution of global proportions. Domestic rebellions or local conspiracies would never be sufficient. Engels and Marx were for this reason disdainful of nationalisms of all descriptions. In their eyes nationalism was just another term for selfishness. Rather than fighting over borders and national identities, subjugated people ought to be co-ordinating with their brothers and sisters in other countries, sharing their burdens and uniting their forces under a common socialist banner, with the aim of destroying the ultimate enemy: capitalism.

The one exception to Engels’s and Marx’s strict internationalism was Ireland. Under Mary and Lizzie’s influence, Engels and Marx developed an affinity with Ireland and expressed support for the independence movement there. Indeed, in his theoretical writings Engels went so far as to speculate whether a successful rebellion in Ireland would precipitate a crisis in the British empire and lead finally to international revolution.

To the lives of Mary and Lizzie, we have no guide. These two Irishwomen, who by their actions and associations wrote themselves into history, were themselves illiterate and therefore left no diaries or letters of their own. They are spoken about fleetingly in letters written by others, but their own voices remain absent from the record. Despite, or perhaps because of their lack of historical weight, I adored them instantly and decided to write a novel about them. Like Engels peering down a Manchester alley, I could only get the slightest sense of them, yet that was enough. Ignited within me was a desire to be with them, in their part of town. More than that, I wanted, like Engels, to be them – as I imagined them to be.

Mrs Engels by Gavin McCrea, longlisted for the Guardian First Book Award, is published in paperback on February 11th (Scribe, £8.99). Over the next four weeks, we will explore the novel through articles and interviews, culminating with a podcast of the author in conversation with Laura Slattery of The Irish Times, to be recorded on Thursday, February 25th, at 7.30pm in the Irish Writers Centre, Parnell Square, Dublin 1. Hodges Figgis offers readers a 10 per cent discount on Irish Times Book Club titles