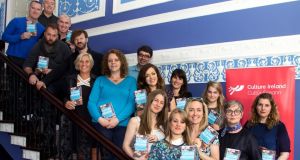 The Fringe, the largest arts festival in the world, will host Corn Exchange’s adaptation of Eimear McBride’s novel A Girl is A Half-Formed Thing at the Traverse. Sonia Kelly’s How to Keep an Alien (Rough Magic) will also play at this venue, which was established to showcase new writing.

Flying the Irish flag at the International Festival on August 8th is The Last Hotel, the world premiere of a new chamber opera composed by Donnacha Dennehy and written by Enda Walsh, which plays at the Royal Lyceum Theatre Edinburgh.

Author array at Dubray
An interesting array of celebrities and authors will offer signings and readings at Dubray Books in the coming weeks. The American author Hanya Yanagihara will read from her second novel A Little Life, recently longlisted for the Booker, on Tuesday, August 25th at The Gallery in the Morrison Hotel, Dublin 1. The event starts at 7pm, with €5 tickets available at dubraybooks.ie.

Celebrity chef Rick Stein and the popular children’s author Derek Landy will sign copies of their latest books at events taking place in September. Landy appears at Dubray Books Galway on Friday, September 4th at 4.30pm, while Stein comes to the Grafton Street outlet on Saturday, September 19th at noon.

Curated by Bert Wright, this is the eighth year of the series that brings bestselling national and international authors to south county Dublin. Booking for all events is through the Pavilion Theatre on (01) 231 2929 orpaviliontheatre.ie. More information on upcoming events can be found at libraries.dlrcoco.ie.

The Roddy Doyle affiliated creative writing centre Fighting Words is seeking volunteers for its annual book project with Transition Year students. Each year the centre works with a Transition Year class to produce an anthology of short stories. The 2014 collection, Brain Storms, by students from CBC Monkstown was published in May.

This year’s group of students comes from Pobalscoil Neasain in Baldoyle. The class will come to the centre once a week for the duration of the school year and each student will write a short story to be included in the anthology. Volunteers will work with a small number of students over the course of the year to help develop their writing. The sessions take place once a week on Thursday afternoons between 1.30pm and 3.30pm at the centre’s base in Behan Square, Dublin 1. To get involved, contact Sara Bennett at sara@fightingwords.ie by Friday, August 21st.

Nuala Ní Chonchúir will launch her anticipated third novel Miss Emily at the Gutter on Friday, August 28th from 6.30pm. Telling the story of the poet Emily Dickinson’s Irish maid, Ada Concannon, the novel explores the friendship that developed between the homesick Irish girl and the gifted middle child of the Dickinson family of Amherst, Massachusetts in the 1800s.

August competition deadlines
Short fiction writers have one more day to enter the 2015 Costa Short Story Award. The online submissions process closes at 4pm on Wednesday, August 5th. Established in 2012, the competition seeks unpublished stories of up to 4,000 words. Entry is free, with a first prize of £3,500, £1,500 for second and £500 for third place. Recordings of the six shortlisted stories are produced for the organisation’s website and available to download. To access the stories from previous years and for more information on how to enter, visit costa.co.uk/costa-book-awards.

Tomorrow is also the deadline for entry to the Galway based 2015 Over The Edge New Writer of the Year competition, which is judged by the poet and editor Dave Lordan. The competition is open to poets and fiction writers worldwide, with a total prize fund of €1,000. The overall winner receives €700 and will present their work at the Over The Edge reading series in Galway City Library. Fiction of up to three thousand words, three poems of up to 40 lines, or one poem of up to 100 lines are eligible for the €10 entry. More information at overtheedgeliteraryevents.blogspot.ie.

The closing date to enter the 2015 Dromineer Literary Festival is Tuesday, August 25th. Inviting entries for flash fiction and poetry, this year’s competition will be judged by the Waterford poet Thomas McCarthy and co-founders of independent publisher Tramp Press, Lisa Coen and Sarah Davis-Goff. Unlimited entries of €5 per poem, with a maximum of 40 lines for each entry. The flash fiction competition is €10 per entry and has a word limit of 500 per piece. Prizes of €500 for first place, €350 for second and €150 for third in both competitions. More information on postal and email entries at dromineerliteraryfestival.ie/Competitions.

The 2016 Arts Council University of Limerick Writer’s Fellowship is open for applications until noon on Friday, August 28th. The €20,000 fellowship, co-funded by the University of Limerick and the Arts Council, is tenable either for the period January to June 2016, or for the full calendar year. Irish writers of established reputation are invited to apply. The 2016 fellow will engage with students, staff and faculty, as well as participating in a number of public events in Limerick city. Along with programme director Joseph O’Connor and other colleagues, the fellow will also participate in the inaugural UL Creative Writing Summer School, at Glucksman Ireland House, NYU next summer. Interested candidates should contact programme coordinator Claire Ryan at Claire.ryan@ul.ie, or Joseph O’Connor at joseph.oconnor@ul.ie, with a covering letter outlining areas of interest, experience and ideas for engagement, in addition to a full CV with three referees. Interviews will take place approximately one month later at the University of Limerick.