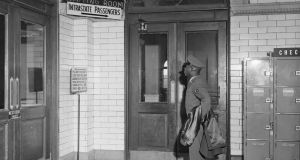 “The flyer’s capital letters made its message especially clear: ‘Zoned as a White Community.’ Below it was a lightening bolt, blood red. ‘Last time I saw one of these, I was in a tank in Germany.’”

So reports Officer Tommy Smith, one of only ten African-American police officers in post-second World War Atlanta. He and his partner, Lucius Boggs, have been drawn from their precinct (the rundown quarter still known to their white colleagues as Darktown) to Hanford Park, a suburb that has become a crucible for Atlanta’s simmering racial tensions. Black families are moving in, including Smith’s pregnant sister Hannah and her husband. Two years previously the sole black homeowner was burned out. This time, the respectable white residents propose to collect enough money to buy the houses back and send their unwelcome neighbours on their way.

Behind this respectability looms the Ku Klux Klan, ready to persuade the black families to leave by more traditional means: a brick through a window, racial abuse through the letterbox. And behind the dangerous, shambolic Klan stand the far more sinister Colombians, elite supremacists sporting the red insignia noted above - the titular ‘Lightning Men.’

Delmar Coyle, their leader, is fresh out of jail for conspiring to overthrow the government, and is preoccupied with more than racial skirmishes, believing the rot set in at Pearl Harbor: “If the damn Japs hadn’t done that, we would’ve let Hitler take Europe and wipe out the Reds and the Jews. Then we wouldn’t have the Reds taking over like they are now.”

Smith and Boggs don’t have the authority to operate in Hanford Park, so they resume their uneasy alliance with white officer Denny “Rake” Rakestraw, a resident of the suburb. Rake’s brother-in-law is in the Klan (Rake is that rare policeman who declined to join), while his wife is at the forefront of the efforts to buy the black newcomers out. Much of the novel’s drama resides in Rake’s attempts to resolve his dilemmas and do the right thing, caught as he is between family and career on one side and justice, and perhaps the spectre of Civil Rights, on the other.

Lightning Men is the follow-up to 2016’s outstanding Darktown, and it is every bit as successful in infusing a complex, subtle and thrilling crime narrative, embracing a bloody turf war between rival drug gangs, with a meticulous, vivid evocation of 1950s Atlanta.

The genius of the novel is to stage the racial confrontation at its heart in the suburbs, the very embodiment of the postwar American dream. And not least among the attendant ironies is the fact that white bankers and realtors have quietly encouraged black families to move there, because blacks are willing - are obliged - to pay more than whites for the same homes.

While Mullen never sentimentalises or simplifies his material, and finds nuance where he can, the sheer ugliness of the racism is never less than disturbing: Smith and Boggs still can’t wear their uniforms to or from work; they can’t drive squad cars or patrol outside their designated neighbourhoods; more than a third of Atlantans are black, yet they are crowded into only a fifth of the land.

And sometimes it is simply heartbreaking, as when we learn that Officer Smith’s sister, Hannah, is not in truth his sister but his cousin. Her parents took Smith in after his father was lynched at a 1919 parade “because he dared wear his uniform from the Great War, enraging the white people in his rural Georgia town. A few months later … Smith’s grieving mother drank an eighth of rye and walked in front of a train.” Powerful, intelligent and beautifully written, Lightning Men is crime fiction at its finest.

Declan Hughes is a novelist and playwright.