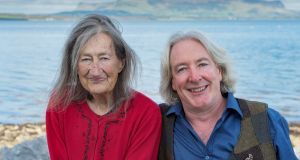 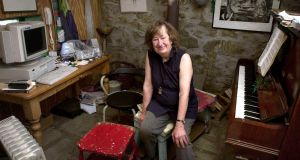 Leland Bardwell, the poet and novelist, died in Sligo yesterday. She was 94. A member of Aosdána, she published five novels, five collections of poetry, several plays, including a musical about Edith Piaf, a memoir and a collection of short stories in a career spanning five decades.

An influential figure on the Irish literary scene, she was a founder editor of the literary journal Cyphers in 1975 along with Eiléan Ní Chuilleanáin, Pearse Hutchinson and Macdara Woods, established the Irish Writers’ Co-operative with Desmond Hogan, Neil Jordan and Steve McDonagh, and set up the literary festival, Scriobh, in her adopted Sligo.

Brian Leyden, a fellow writer, friend and neighbour paid this tribute today: “Leland Bardwell lived life at the same jaunty angle she tilted a cigarette or wore her beret. Quick thinking, self-vigilant, a true bohemian, friend to Patrick Kavanagh and Luke Kelly, in her poems, plays, and novels she belonged in the first rank of Czeslaw Milosz’s ‘secretaries to the invisible’. She loved to quote Pearse Hutchinson on raw experience, ‘If it’s bad enough, you might get a poem out of it’. Prone to the sudden tizz, her conversations often began: ‘It’s all rather awkward, actually….’ She embodied that bird of passage in her poem Cuckoo On Top Of The Protestant Church, Dugort: ‘gate crasher, percher on steeples. Such selfishness, such panache, never in the one place twice’.”

Author Molly McCloskey said: "I first met Leland in 1990 in Sligo, at a small writing group Dermot Healy had started. She came in with Dermot one night and I can still see her there, the look of concentration as she listened to our stories, the seriousness with which she took them. We became close friends in the years after. Leland was an unusual combination of things – both a hell-raising party pal and a caring maternal figure I relied on enormously. She had an incisive mind, and was one of those rare people who, as she aged, remained deeply interested in the new and in the young. She was ahead of her time in many ways, and carved for herself a life that was not always easy but that was certainly, in the years I knew her, her own. She was independent, irreverent, hilarious, and very generous."

Ní Chuilleanáin, the next Ireland professor of Poetry, said of her new and collected poems, The White Beach: “it is good to see her work of the decades collected - it has inspired many Irish poets, male and female, and should be much more widely known. Leland Bardwell’s poetry is witty, full of sharp, intimate honesty, full of truth and surprises. She is a poet who has felt the shocks of our time, the private impacts and the historic changes.”

Born in India to Irish parents, she was brought home at the age of 2 and grew up in Leixlip. Co Kildare. She was educated at Alexandra College, Dublin and the University of London.

Her father, Pat Hone, had a family lineage that included the artists Nathaniel Hone (the elder and the younger) and the stained-glass artist Evie Hone. In interviews, she said that categorising her as an Anglo-Irish writer was inaccurate, as her family originally came from the Netherlands, but she frequently wrote about being Protestant in Ireland after independence.

As the description in her memoir, A Restless Life (2008), attests, she had an extremely difficult childhood. Her parents openly favoured her elder, more beautiful sister, Paloma, and her mother, perhaps jealous of her younger daughter’s intelligence and talent, convinced Leland that she was ugly.

Her adult life, unsurprisingly, was indeed restless. She married, in 1948, but later separated. There were subsequent affairs and entanglements. She drifted from bohemian postwar London back to Dublin, where she carved out a life for herself and six children, and became a fixture on the literary scene, counting among her friends Patrick Kavanagh and Paul Durcan.

She struggled to bring up the children and applied herself to writing, bringing to both her poetry and her prose a clear-eyed, unsentimental empathy for the disadvantaged, those rendered less powerful by their gender, poverty, lack of education or emotional injuries.

Fellow writer Evelyn Conlon paid tribute. “I interviewed her for the Irish Writers’ Centre and what a night. We were just about to start when her ex-husband came in and sat in the front row. She took a few deep breaths, let out a chuckle and carried on. That night she said, among other things, that you could never really be poor if you didn’t have children. I was asked to write for a festschrift for her 70th birthday and then about a year later was asked to her 80th. She said that once she hit 70 it was time to come out, which was a thing we never expected, because she was truly ageless. That London Winter is a gem, one of the coldest, clearest echoes coming from that time. I will miss knowing that she is there.”

Her works include poetry collections The Mad Cyclist, The Fly and the Bed Bug, Dostoevsky’s Grave: Selected Poems; The White Beach: New and Selected Poems, 1960-1998; and The Noise of Masonry Settling; novels Girl on a Bicycle; That London Winter; The House; There We Have Been; and Mother to a Stranger; the memoir A Restless Life and Different Kinds of Love, a short story collection.

Cancel culture: can you defend people who say unpopular things?
5