Kilmainham Gaol: my No 1 prison as a ‘dark travel’ writer

Postcards from the edge of humanity: Thomas H Cook on visiting Auschwitz, the killing fields and Dublin to get a sense of the terrors of history 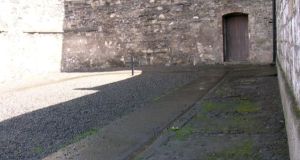 The execution yard at Kilmainham Gaol

If, as a boy, I’d had any notion that there was such a thing as a “travel writer”, I would have dreamed of being one. But from the limited perspective of a small town in Alabama, I hardly knew that a wider world existed. In time, however, that larger world revealed itself to me, mostly through books, and the more I became aware of it, the more I wanted to go into it.

My daughter Justine once said that tourists take their world with them, while travellers go into the world. Because I was poor, I went always as a traveller. On my first trip to Paris, I ate cheese and bread in the park. On my first trip to London, I stayed in a tiny room with a bath down the hall, one that combined shower and water closet in such a way that the cracked toilet seat was regularly sprayed. In later life, I met many people who’d toured the world in luxury. To my dismay, I discovered that not one of them had a travel story that did not involve the taste of food, the comfort of rooms, or the attentiveness of service. They had seen cathedrals and museums, but they had not seen the life that swirled beyond such places, the crowded trains and creaking buses, the noise and dust of ordinary life, the universal struggle to make do.

I also did a lot of what is called “dark travel”. I went to Auschwitz and Verdun, to the dungeons of Elmina and the killing fields of Choeng Ek. From such places, I got what anyone else would get, a sense of the terrors of history, surely useful instruction for a writer.

But as a writer, travel often provided much more practical benefits. In Albi, a small village in France, I suddenly discovered how one of my novels should end. I had been struggling with this issue for weeks, increasingly uncertain, and getting a little desperate since a novel does, in fact, require an ending. Then, in Albi, at sunset, my novel’s denouement miraculously revealed itself. On another occasion while on the road, my wife pointed out a road sign whose words became the title of a novel. I would not have written A Dancer in the Dust had I not gone to Ghana, nor The Quest for Anna Klein had I not gone to Belgium, nor The Anguish of Ghosts, the novel I am working on now, had I not gone to Indo-China. Travel provided not only the setting for these books, but my reason for writing them.

Travel also deepens a writer’s connection to the rest of humanity. Rare is the traveller who can despise mankind. You simply cannot move through the byways of the world without increasing your affection for people. You are too often helped by strangers, too often the beneficiary of unexpected kindness, too often lost, only to be shown the way by someone you will never see again, to remain scornful of our kind. I was saved by a Pole at a border crossing in Hungary, by a businessman among the high-rises of Hong Kong, by a fellow diner in Mexico City, by a hair salon owner in a remote Japanese village, all complete strangers. From them, and others like them, I learned that most of us are only one trip away from opening our hearts. Surely a writer needs to know that.

But for me, no place has ever encapsulated all the foregoing benefits of travel for a writer more than Kilmainham Gaol in Dublin. I have toured prisons throughout the world, but none has ever moved me in the way this prison did. And I know why. Kilmainham is revealed not by walking through its cells or standing in its execution site. Kilmainham is revealed by its stories. The day my late wife and I came there, the entire history of the prison was related in story form. We were told stories of lovers who’d last seen each other within its grim walls, of a little girl imprisoned for stealing turnips, of brave men executed in its courtyard while their wives, children, friends and compatriots listened for the sound of rifle shots that would convey the tragic news that their loved ones were gone.

My wife and I had visited many prisons during our travels, but it was only at Kilmainham that she cried. For a writer, Kilmainham provided a remarkable illustration of the sheer power of story-telling, itself, the depths its can reach, the emotions it can summon, the past lives it can restore to life. For a writer, there can be no greater proof of the value of telling stories, nor any deeper motivation for continuing to do it.

Tragic Shores: A Memoir of Dark Travel by Thomas H Cook is out today (Quercus £20)