Julian Gough on The Ogham Stone, part of Munster’s renaissance

Munster is incredibly culturally interesting, says Julian Gough. This Leonard Cohen poem by him is included in UL’s literary journal, launched this weekend in Doolin 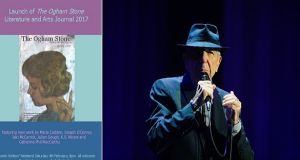 After 10 years writing peculiar fiction in Berlin, I’ve returned to Ireland for a few months, as Arts Council Writer Fellow at the University of Limerick. I came back because I grew up near here, and I miss the voices; and also because, with Kevin Barry, Donal Ryan, Lisa McInerney, Rubber Bandits and others, Munster has become incredibly culturally interesting.

And Irish universities have become far more hospitable to writers of peculiar fiction. As a young man, I wanted to make rock’n’roll more literary, and literature more rock’n’roll: now I’m at the university which held the first international David Bowie symposium. (I’m even reading, for pleasure, David Bowie: Critical Perspectives, the book that came out of that symposium.) The UL creative writing programme is exactly the kind of thing I wish had existed when I was a young man. (It’s run by Joseph O’Connor, a man who has written successful novels about both the famine – Star of the Sea – and a post-punk band – The Thrill of it All – and is thus the perfect Irish author.)

And so, I’ll be helping launch The Ogham Stone on Saturday, as part of the Doolin Writers’ Weekend. The Ogham Stone is the annual UL literary journal: 25 MA students (in English and creative writing), are given a tiny budget and very little hand-holding, and let get on with creating an entire, book-length literary magazine from scratch. The quality of the result is remarkably high. Several members of the UL creative writing programme have written for this issue: Giles Foden (author of The Last King of Scotland) provides a foreword. Joseph O’Connor contributes a story. Other fine established writers also present include Nuala Ní Chonchúir and Catherine Phil McCarthy. Future stars include Barry McKinley, whose savagely funny A Ton of Malice comes out later this year. And I gave them this poem.

I don’t deliberately set out to write poems. (And I make no great claims for them.) But on November 7th last year, I got up early, to catch a plane, and saw that Leonard Cohen had died. This poem arrived on my way to the airport. I took it down, like dictation, on my iPhone. It is what it is. I shaped it a little over the following weeks, but it’s essentially a hot take; what I felt in those hours.

And now I’m being asked what it feel like, to be back in Ireland; to be living in Limerick? Well, the generation for whom Bowie, Prince, the Clash, the Smiths, the Slits, Patti Smith, Leonard Cohen and, yep, even George Michael changed the way we think about sex and work and love and life are now running university departments, writing books, and wearing plastic SuperValu bags over their faces. It’s GREAT to be back…

So, there you are. Hope you like the poem. If you’re in Doolin on Saturday, say hello…

Julian Gough sang in the band Toasted Heretic, before becoming a novelist and children’s writer. Rabbit & Bear: Rabbit’s Bad Habits was shortlisted for an Irish Book of the Year Award last year. His new Rabbit & Bear book, The Pest in The Nest, is out now in hardback. He is on Twitter as @JulianGough

Further information on the Doolin Writers’ Festival can be found at: doolinfestivals.ie

Leonard Cohen has ceased to exist as a thing in this world.
And yet he continues to exist.
I can see his face when I close my fist.
His words just came out of my mouth, like this:
I have tried
In my way
To be free.

Both singing,
At the end,
Hallelujah.

Now, here, on a train, in dirty dawn light
With an iPhone
And an hour before my flight
As his name starts to trend
(Tapping gorilla glass
On the porn-smudged screen
Of a pink iPhone, at
6.46am
A poet?
A prophet?
All wrong.
A lover?
A cleric?
A...
No.)
Who am I, to sum up
A man who could spend
Fifteen years writing a song
Five minutes long,
That will outlive America?
So...

In the terminal building
I take out my sandwiches
They’ve leaked tears of honey
On my book, my harmonica
I wipe them down
With a serviette.

And I play the sweet harmonica
By the thrumming engine of the jet.

As Leonard Cohen’s body warms the world, I board my flight.
We leap into the sky, up through low clouds, and into light.