Jaron Lanier: the online guru who says the internet is out to steal your job 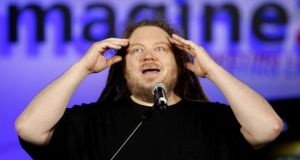 Jaron Lanier worries a lot. In his book Who Owns the Future?, the dreadlocked digital pioneer, who has an infectious, high-pitched laugh, worries about the internet.

He worries that his generation of digital utopians got it horribly wrong, that far from being an egalitarian environment in which all are equally engaged in free exchange, the internet is a place where unaccountable businesses with the fastest processers profit from the work, knowledge and lives of everyone else. He worries about how middle-class jobs will be eroded. He worries that ordinary people are exchanging future job security and the valuable details of their lives, in return for free services in the here and now. He worries that the doctrine of “free” is cutting ordinary people out of the economy.

He likens the social effects of file-sharing to the effects of securitising mortgages. He likens the ideology of the Pirate Party voter to the Wall Street mogul (both believing “all must be made fluid”). “But I don’t believe in the doctrine of good people and bad people,” he says.

Lanier, a computer scientist and philosopher, was mentored by Marvin Minsky in the 1970s and was involved in the development of virtual reality in the 1980s. He is part of the network of Silicon Valley gurus who developed the brave new digital world we live in now, and still works at the heart of the industry, most recently with Microsoft.

“The people who argue with me these days are often repeating at me my own lines from decades ago,” he says. “A lot of the lines about how it’s better for musicians and journalists to be free from interference, I helped make up that stuff, and at the time I believed it. What changed my mind was observing the empirical results on the real world and what was happening to the lives of people I knew. It wasn’t working out so well in reality.”

The problems with free data

Lanier’s new book critiques the notion of free and easy, value-free data. He says it masks a huge power imbalance. He maintains that this information is not free; that we pay for it in the long-term with reduced job security, and in the short-term with our own data, harvested commercially by

“big data” companies such as Google, Facebook and Amazon. “In the current regime of open networks and free information whoever has the biggest computer becomes the master,” he says. “It’s all a big put-on. It does give treats. You get free services online but further on it will lead to you losing your job.”

According to Lanier, the job destruction caused by digital technology has not resulted in comparable new employment opportunities online. And this doesn’t stop with the music industry or journalism. No, says Lanier, it’s coming soon to an industry close to you, thanks to new technologies such as 3D printing and self-driving cars.

“The better technology gets, the more the economy at large becomes an information economy,” he says. “Once when people talked about automation, they were imagining that some mathematician would write the magic formula that would allow automation to take place, but instead it turns out these things run on big data.”

And big data is people. “Anonymising it and pretending it didn’t come from individuals is a kind of accounting fraud,” says Lanier. “The big companies hide behind the idea of AI [artificial intelligence], but that’s just another word for falsified accounting. They’re pretending that people don’t contribute the data it all runs on. Google Translate is the product of thousands of translators whose efforts are mashed up . . . in the same way as [securitised] mortgages were mashed up.”

This half-hidden trade in our collated data, whether to run services or predict spending patterns, is what makes the system work. Meanwhile, because there’s an expectation that digital services and content be free, ordinary people are increasingly cut out of the new economy, unable to buy and sell. “These big companies are concentrating power by shrinking markets,” says Lanier.

And yet a persistent strain of internet Utopianism insists that these new technologies will, if unconstrained, take us somewhere wonderful. This optimism has roots, says Lanier, in the Silicon Valley of the 1970s and 1980s, when new age spirituality blended with technological thinking. “Many brought ideas from traditional religion into technology, like the notion that advanced machines could back up our brains and give us immortality. They even have something like ‘the rapture’ that they call ‘the singularity’ [the moment when our minds are uploaded to machines or the moment machines become truly intelligent] . . . This isn’t a fringe movement of fanatics – this is the stated public agenda of the largest computer companies. Google talks about actively building a global brain that will surpass humanity.”

Lanier always believed in more human-centred technology. “This notion that we were making machines that would transcend people always seemed unsound to me but it really became clear when I saw people suffer based on ideas I thought would be great for them. One guy I know had a wonderful career in music but the new music business demanded that people tour all the time and he had a sick father so couldn’t tour. He was forced into bankruptcy and lost the family home.”

Future solutions
So what can be done? Political solutions don’t appeal to him. He dismisses notions of left and right as a legacy of the 19th century. “Software moves so quickly and programmers are so clever that it’s hard to imagine a bureaucracy ever making laws that could keep up,” he says.

On a general level, Lanier feels ordinary people should be able to value their own data and their own content. “Information shouldn’t be free,” he says. “It should be affordable. I think giving data a more explicit monetary value will force a kind of a balance.”

His specific starting point is a redesign of the web that might eventually facilitate small remunerations for ordinary people. He believes the type of one-way linking devised by Tim Berners-Lee, who first developed the world wide web, deprives data of history. “It specifically disenfranchises people from the economic value of what they bring to the net. As long as we remove the economic value, it’s all about sharing and getting an ego boost because you’re recognised with only a token amount of people able to leverage that ego boost into economic benefit.”

He thinks that instead we should employ the kind of two-way hyperlink proposed by the IT pioneer and philosopher Ted Nelson back in the 1960s. “That would allow you to trace where information came from. If you track information it has economic advantages and advantages for understanding meaning, but there’s also a moral advantage because it makes it clear that all data and all knowledge comes from people and we can trace it. Information is always a person in disguise. It’s a form of puppetry.”

Ultimately, Lanier says, “this should be about people. It should not be about computers.”

Lanier also recommends that everyone take long holidays from the free online services they’ve become dependent on. He himself spends a lot of time playing archaic musical instruments (“They have the best user interfaces”).

“[Going offline] makes me sensitive to how much information I glean not from the internet but from the web of subtle interactions I have with people in the world at large.

“If you’re always online, it’s easy to miss how much information you get from direct human communication . . . And it’s remarkable how shallow the internet is actually. Anytime you really, really get to know a subject, you start to notice that there’s a body of stuff that’s repeated over and over again while the better stuff gets drowned out.”

In Who Owns the Future? , Lanier outlines a number of dystopian scenarios that we could be heading for (some of them read like Philip K Dick stories). He feels there is a crisis on the horizon.

“This could be anything from a sudden rise of socialism. Some people might like that, but rapid revolutions are often cruel. Or we could get a bizarre sustained austerity, a high unemployment state where people just accept it and get enough treats to make do. Or maybe a super-elite will become pseudo immortal and go off in space ships and let everyone else die.”

He laughs. “I don’t know. There are a lot of possible scenarios but the scenario I think we should all want is one where there’s still a middle class that can outspend the top, where political power is genuinely distributed, and the preponderance of people can invent their own lives, live creatively and enjoy these high technological times.”


Who Owns the Future? by Jaron Lanier is published by Allen Lane