James Joyce and Italo Svevo: The Story of a Friendship review 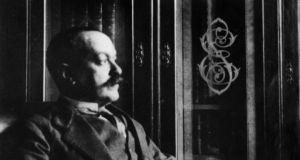 The writer Italo Svevo in Trieste in 1900, beside a bookcase decorated with the initials of his real name, Ettore Schmitz. Photograph: Mondadori Portfolio via Getty Images

Book Title:
James Joyce and Italo Svevo: The Story of a Friendship

The very name of Ettore Schmitz is a testimony to the multicultural nature of the Trieste in which he lived. The Christian name is Italian, the surname is German and the family was Jewish.

His parents had arrived in Trieste in the 1840s, and Ettore (born in 1861) went to a Jewish school there, so his Jewishness adds to the mix of Italian (linguistically), Austrian (by citizenship) and German (by origin) from which he came. In religion he was a nonbelieving Jew who became a nonbelieving Catholic in order to accommodate the anxieties of his wife, Livia Veneziani.

Schmitz had strong literary interests from an early age: his novel Una Vita was published under the pseudonym Italo Svevo in 1892, and another, Senilità, in 1898. Both were ignored by the Italian literary establishment, and Schmitz, who was easily discouraged, had given up writing afterwards, working first at a Trieste bank and later, far more prosperously, in his wife’s family’s ship-painting business.

As the family business expanded to England Schmitz decided to improve his command of English, and so in 1907 he began to take private lessons from a young Irishman who lived on Via San Niccolò. This was James Joyce, who had come to Trieste in 1904 and whose principal livelihood derived from teaching English. The two men instantly struck up a rapport: reading Schmitz’s comments and letters in James Joyce and Italo Svevo: The Story of a Friendship, Stanley Price’s book, it is clear that he had a wry, detached and disillusioned outlook on life that would certainly strike a chord with his much younger English teacher.

Price is particularly thorough and helpful on one of the main reasons for Joyce’s interest in his hybrid pupil: his Jewishness. The idea of a work about a Dublin Jew had been in Joyce’s mind since 1906, although he began to write Ulysses only much later. There is no doubt that much of what Joyce wrote about Leopold Bloom’s Jewish background came from Schmitz. (It did not derive directly from his limited Dublin experience.)

On the most basic level Joyce derived information about Jewish customs and perceptions from Schmitz; he constantly bombarded the unusual Triestine businessman with queries about such matters. Schmitz, though he was not even formally a Jew by this stage, had experienced enough of that world as a child and a young man to be able to pass on a great deal of knowledge.

There is also, as Price ably outlines, good reason to believe that elements of Bloom’s character derived from Schmitz. Bloom’s diffidence, his not entirely thoroughgoing cynicism, his gentleness, his reasonableness, the breadth of his sympathies, all seem to be characteristics that Schmitz shared.

It is very hard to be definitive about this – there are other candidates for the honour – but given his closeness to Joyce, and his own background, there is every cause to believe that there is more than a little of this then obscure Triestine in Leopold Bloom.

Then obscure: fairly early in their encounters Schmitz disclosed to Joyce, who he quickly realised was essentially a writer, that he himself was the author of two novels published under a pseudonym, which had sunk without trace. Joyce was most surprised and asked to see them. He told Schmitz how impressed he was with their dark power, thereby encouraging a delighted Schmitz to write again.

Joyce was too obscure at this time to be able to do much to aid his pupil: his efforts to promote him in Triestine literary circles fell on deaf ears. Later, though, when Schmitz produced his masterpiece, La Coscienza di Zeno, Joyce was much better placed to help him, the upshot being that Schmitz, under the name Italo Svevo, is now recognised as a major modern Italian novelist. Both he and Joyce are honoured in Trieste with statues and foundations devoted to them.

Price brings a freshness of perception and considerable extra detail to the story of this relationship. He charts the parallels between the lives of these two figures, explores their relationship with sympathy, understanding and humour; commenting on Schmitz’s efforts to solace himself with music for his lack of success as a writer, he writes: “Joyce and Svevo found consolation for their frustrations in very different sorts of bars.”

His book is a fitting tribute to one of the most productive relationships of both writers’ lives. One might say that Joyce owed Svevo for his role in the creation of Leopold Bloom, and he repaid that debt handsomely by his part in ensuring Svevo’s lasting fame. Joyce, moreover, borrowed Livia Schmitz’s beautiful first name, and her hair, for the Anna Livia of Finnegans Wake.