James Joyce and Italo Svevo: the story of a friendship

Despite the difference in their ages and backgrounds, the two were both multi-lingual polymaths, renowned for their wit, dedicated but unsuccessful writers 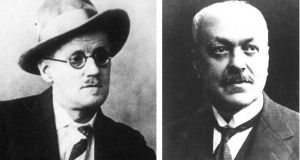 James Joyce and Italo Svevo: they complemented each other in a practical way – Joyce was a great borrower, Svevo a generous lender

I spent much of my childhood in Dublin. For summer holidays, my grandparents rented a house at Sandycove, and I swam there in the shadow of the Joyce Tower. I was about 10 years old and just assumed that this was named after a local girl. It was my grandfather who put me straight – Joyce was no girl, but a great Irish writer. He had stayed in that tower, and the opening scene of his famous book Ulysses starts there. And what’s more, its hero was Leopold Bloom, a Dublin Jew. Because my family were Dublin Jewish, my grandfather seemed very proud of that fact.

I doubt if my grandfather had read Ulysses – even if he could have got hold of a copy. He was an upright and devout man, and would have been appalled at what Bloom got up to. I later learned there was much speculation in the community as to whose father or grandfather was the model for Bloom. My father thought it was probably the father of the pharmacist on Lower Clanbrassil Street. (The plaque on “Bloom’s house” is on 52 Upper Clanbrassil Street.) When Joyce, aged 22, and his girlfriend, Nora Barnacle, sailed from Dún Laoghaire for Trieste in 1904, there were only about 2,000 Jews in Ireland and most research concludes that Joyce hadn’t actually met any of them. For the rest of his life, he only went back to Ireland for three short visits, although everything he wrote was set there.

Many years after my Sandycove experience, having read most of Joyce, a friend lent me The Confessions of Zeno by Italo Svevo. A critic’s quote on the cover said it was “one of the great comic novels of the first half of the century”. I read it and he was right. I became a Svevo fan, and read elsewhere that Svevo, a Triestine Jew, could well be the model for Leopold Bloom.

It’s an extraordinary coincidence that of the four great modernist writers – Kafka, Proust, Joyce and Svevo – two of them lived in Trieste. In March 1907, serendipity brought Ettore Schmitz (Italo Svevo was a pseudonym) to the Berlitz School, where Joyce was teaching. Svevo worked in his in-laws’ maritime paint business. Their paint “kept ships’ bottoms clean and free from rust and barnacles.” In the naval build-up to the Great War, their business was booming. About to negotiate a major contract with the British Admiralty in London, Svevo needed to improve his English. Joyce became his teacher and was soon giving him lessons three times a week in Svevo’s home, which his wife Livia often attended.

When they first met Joyce was 25, Svevo 46. Despite the difference in their ages and backgrounds, lapsed Catholic and non-observant Jew, the two men had a great deal in common. They were both multi-lingual polymaths, renowned for their wit. Joyce was a heavy drinker, Svevo a heavy smoker, always about to give up. Both were dedicated but unsuccessful writers with day-jobs they could not afford to relinquish. Initially, neither knew the other was a writer. They also complemented each other in a more practical way – Joyce was a great borrower, Svevo a generous lender. It was another serendipity that a man who made his living selling a paint that repelled barnacles was lending money to someone who lived with a woman called Barnacle.

In early November 1907, at the end of a lesson, Joyce read his short story The Dead to Svevo and Livia. Apart from Joyce’s brother Stanislaus, they were the first people ever to hear this story. It says much for their taste, as well as their English, that they were both deeply moved by it. Livia went into the garden, picked some flowers, made a bouquet, and presented it to Joyce. From then on, the two men took long walks, Talking constantly about their literary plans and disappointments. An eye-witness reported seeing them, as the fierce bora wind howled around them – “they clung like mountain-climbers to the safety ropes fixed in the downtown streets, but never stopped talking”.

So was it really in Trieste, and not Dublin, that Joyce found his model for Bloom? In fact, Joyce did not need a “model” as such. He was a novelist creating the character of a wandering Everyman. The nature of the Svevo-Bloom connection is best conveyed by Joyce’s brother Stanislaus. He also worked at Berlitz, and once stood in for Joyce when he was ill. Afterwards, in his journal, Stanislaus wrote that Svevo said “Tell me some secrets about Irishmen. Your brother has been asking so many questions about Jews that I want to get my own back.” So Joyce was using Svevo rather like a Jewish Google. A critic once asked Joyce did his Ulysses have to be Jewish? His reply was “Yes. Only a foreigner would do. The Jews were foreigners in Dublin at that time. There was no hostility towards them. But contempt, the contempt that people always show towards the unknown.”

Joyce lived in Trieste for 11 years. Then, in 1914, because of his British passport, he became an enemy alien. The Joyce family left for Zurich, and it was there he finished Ulysses, a photograph portrait of Svevo on his desk. Back in war-torn Trieste, Svevo started writing The Confessions of Zeno. In 1919, the Joyces returned to Trieste, but only for a year. They left to live in Paris, but Joyce’s friendship with Svevo survived. They corresponded and Svevo made numerous trips to Paris en route to business in London. With the publication of Ulysses in 1922, Joyce became a literary celebrity. It was this success that finally enabled him to repay, at least in kind, all Svevo’s generosity. Svevo was having great problems finding a publisher for Zeno – an experience both writers had throughout their years in Trieste. But now Joyce was to put his energy and new-found reputation into promoting Svevo’s book with publishers and leading critics in Paris. Joyce’s campaign succeeded. The Confessions of Zeno was published there in 1926 to great acclaim, and Svevo was hailed as the “Italian Proust”.

Two years later, Svevo died as the result of a minor car accident. He was 63. Replying to Joyce’s letter of condolence, Svevo’s widow, Livia, wrote that her husband had likened Joyce’s great help and encouragement to that of “a kindly star in the sky”.

James Joyce and Italo Svevo: the story of a friendship is published by Somerville Press