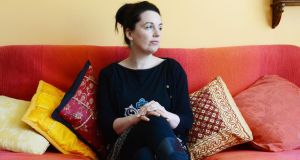 Niamh Boyce: “I was thinking of women who are sacrificed so that the male establishment can maintain their own illusions. There isn’t a decade that women aren’t dying, because of male laws.” Photograph: Alan Betson

The first thing I notice when the writer Niamh Boyce sits down in a Co Kildare hotel foyer for an interview is her angel. She is wearing a large silver angel on a chain around her neck. Somehow, it makes sense that a writer of historical fiction, whose second novel focuses on witch trials in 14th century Ireland, has a liking for the supernatural.

Her Kind, the title of the novel, is also the title of an Anne Sexton poem. The poem begins: “I have gone out, a possessed witch…” The particular witch at the centre of Boyce’s novel is Alice Kytler; a real woman, who lived in Kilkenny in the early 14th century. The daughter of wealthy Flemish merchants, who accrued another fortune via moneylending, she married four times. A source of much jealousy due to her wealth, Alice Kytler was tried as a witch, along with others from her household.

She was accused of a number of offences, including heresy, murdering her former husbands, and having sex with a demon. However, it was not Kytler, but her servant Petronelle de Midia, who ended up being tortured and confessing to witchcraft. She was burnt to death. Kytler escaped, it’s thought she went to England.

“I think it’s important to retrieve people, especially women, from history,” Boyce says. She lives near Kilkenny and absorbed the story by osmosis as a child. “It’s something you grow up knowing about; Kilkenny Castle, and Alice Kytler and something about a witch.”

When I started writing first, I thought I was going to write something very racy and very contemporary

When it came to writing her new novel, it was this story of Kytler and the Kilkenny witch trials that returned, and would not leave her alone. “When I started writing first, I thought I was going to write something very racy and very contemporary,” she laughs. “Then the voice of Petronelle came to me. As soon as I got a bit in, I knew I needed to do research. I’m usually a fast writer, but it’s probably the research that made this book take so long.”

Her Kind is fiction, but Alice Kytler and her servant were real people. The events that take place in Boyce’s novel may be set 600 years ago, but the reasons for the church’s anxious pursuit of apparently heretic people remains modern: monetary gain. “Money had a lot to do with it,” Boyce says. “The more heretics there were, the richer the church became. It was a kind of tax.” Witchcraft was a heretical crime, and as Kytler was so wealthy, sooner or later, it was inevitable that she would become a target.

Boyce worked on the book for four years. At present, she is about halfway through taking a year off, to concentrate on writing. Her desire is to spend as much time possible writing, while also mentoring other writers, and teaching yoga. “That’s the dream,” she admits.

In the past, she has worked in community development and part-time as a librarian in a rural library. It only opened five hours a week, but she saw how vital those five precious hours were to the community it served. “It was the only place people could go that didn’t cost money,” she says.

Children, she reports, were the most avid book borrowers. She also noted with dismay that boys were reluctant to borrow books by female writers. Adults, she observed, borrowed mostly crime and memoir; an observation that must have been slightly dispiriting, given her own ongoing work on fiction and novels.

Boyce, who won Newcomer of the Year at the 2013 Irish Book Awards for her debut, The Herbalist, originally wanted to be a painter. She did paint, but found the process slow. “I made about one painting a year. I’d be working on a painting for so long, I’d paint over it. I was not very commercial,” she says wryly.

She made collages and watercolours. Once she began writing, what she most liked about this new form of creativity was how private and invisible it was. Visual artists work in a highly visible and visceral way, where it’s possible to see the process evolving. Whereas, if you’re writing with a pen in a notebook or on a screen, the process is not evident to anyone, unless you are literally standing behind them. “I find it much easier to write than to paint,” Boyce says. “My creativity became really clean and tidy and private.”

When Boyce sat down to work on her first novel, it was not racy, contemporary Ireland she ended up writing about. The Herbalist is set in Ireland in the 1930s. With Her Kind set in the 14th century, it’s historical fiction which has become her genre; to date, anyway. “You can’t be cut off from the past,” Boyce says. “It is part of our DNA. It is in everything. Historical fiction in Ireland is a new thing.” She’s clear on the elements of the past that appeal to her personally as subjects, however. “Who wants to write a book about the fecking Famine?” she asks rhetorically. (Paul Lynch, look away now.)

Historically, it was always women who were deemed to be witches, and considered  dangerous, especially when they showed independence

The cover of Her Kind is a very noticeable gesture to a certain book by Margaret Atwood. It depicts five women in single file, walking across a frosty field; four in black cloaks and one in a red cloak. Is the visual reference deliberate?

“I guess it is playing on the idea that this is a version of history that hasn’t been told before.” In the Author’s Note at the back of the book, Boyce writes, “I’ve written this novel to explore that may have happened, to give her [Petronelle] a voice. It’s written in memory of her, and women like her.”

“I guess I was really thinking of women who are sacrificed so that the male establishment can maintain their own illusions. There isn’t a decade that women aren’t dying, because of male laws,” she says, citing the death of Savita Halappanavar as what she considers to be an example of this.

In the past, the crimes witches were accused of were, among other things: communing with demons, making love and hate potions to corrupt Christians, and magically excommunicating the church. What, in 2019, does Boyce consider are behavioural traits in a person that are still regarded with fear and suspicion? “Mental illness,” she says, without missing a beat. “People don’t understand it.”

Historically, it was always women who were deemed to be witches, and considered to be dangerous personages, especially when they showed any evidence of independence. The terror of witch trials was a way of keeping women in control. What does she consider to be the modern equivalent of these witch trials?

“The way young women are almost forced to reduce themselves to image,” she says. “Due to the amount of anxiety that goes into someone’s appearance, even from when they are a child. Why is it everybody’s business what young teenage girls are doing? They are not seen or judged in terms of their brains. The focus is all on their bodies.”

Boyce likens the criticism of how young girls appear on social media platforms of Instagram and others to “being burned at the stake.” Petronelle de Midia, who was actually burned at the stake in Kilkenny some 600 years ago, could never have imagined such a future.

Her Kind, by Niamh Boyce, is published by Penguin Ireland