Twilight of the Elites review: An insight into France’s gilets jaunes 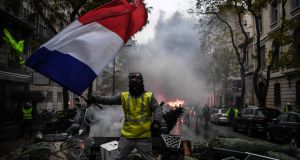 Book Title:
Twilight of the Elites, Prosperity, the Periphery and the Future of France

Reading Christophe Guilluy’s Twilight of the Elites is like spending a day with the yellow vest (gilets jaunes) protesters who have turned France upside down since November 2018. There are moments when one feels one has understood something obvious but hitherto overlooked. And there are bouts of exasperation at the conspiratorial world view and sheer destructiveness of the movement for which Guilluy has been a cheerleader.

Guilluy, a geographer by profession, is credited with having coined the term “peripheral France”, the title of an earlier book. He is like an animal that senses the earthquake before it happens. Twilight of the Elites was published in French two years before tens of thousands of French people took to the streets over a carbon tax, then transformed their movement into a revolt against inequality, representative democracy and globalisation.

“The existing order will finally break down… as the result of a slow process of social and cultural disaffiliation on the part of the working class,” Guilluy writes in his introduction. With chilling prescience, he predicted that bonnets rouges protests against a tax on lorries in 2013 was “a harbinger of the radicalisation of rural areas and small towns”.

Guilluy sides with the working class against what he refers to incessantly as “the dominant classes”, “the privileged” and the “new bourgeoisie”. If the gilets jaunes have an ideologue, it is him. “The twilight of the French elites now dawns at last,” he writes triumphantly in the passage that gave the book its title.

There is much that is true in Guilluy’s book. He denounces the hypocrisy of affluent French people who claim to value republican principles, particularly equality, but send their children to private schools. He explains that public housing in former white working class suburbs is now inhabited by migrants from the Maghreb and sub-Saharan Africa, who are exploited as servants by whites living in city centres.

Location, location, location, any estate agent will tell you. For the first time, Guilluy writes, the French working class have been geographically distanced from centres of wealth and production. “Peripheral France,” which is mostly working class, comprises 60 per cent of the nation’s population. They are now invisible and unemployable. For them, location is destiny.

There is an ugly undertow to Guilluy’s message, echoed in the rhetoric of the gilets jaunes. It is rooted in class hatred and conspiracy theories. The wave of violence precipitated by the gilets jaunes has resulted in billions of euros worth of damage. About 70 parliamentarians have been attacked, some in their homes. Guilluy’s denunciation of “dominant classes” who “busy themselves scrambling for the spoils left over from the modern-day hunt, which is to say the plundering of French society” verges on incitement.

The word “spoils” is repeated often, as in “everywhere the spoils will be shared by the sons and daughters of privilege”. In Guilluy’s view, the “dominant classes” have plotted to rob the working class of their homes and livelihood. The white lower middle class have been “evicted” from the cities. “From factory workers to small farmers to wage earners in the service sector, the programmed expulsion of these categories has now very largely been achieved,” he writes.

Guilluy overestimates the culpability of a political class that failed to foresee the consequences of mechanisation and globalisation. He claims France has adopted “the hardest and most unpitying form of capitalism imaginable,” but provides no evidence for his claim that politicians have decimated the welfare state.

Guilluy contradicts himself, for example saying that “France has embraced globalisation in all its glory,” then admitting a few pages later that “a majority of the French (almost 60 per cent) consider globalisation to be a threat”.

Guilluy concludes with a denunciation of the “soft totalitarianism” of politicians who deplore Brexit: “The fairweather democrats of the higher France are ready to rewrite the rules of political participation on the pretext that the poorly educated working classes do not understand what is really at stake and that they are naturally carried away by their ignoble instincts.”

As social science, it’s sloppy. But as an insight into the mindset of the gilets jaunes, it doesn’t get much better.

Lara Marlowe is France correspondent for The Irish Times