Grey can be read as a sadist’s self-help book, justifying the need for wounded men to control women as a form of therapy 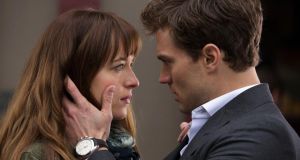 Dakota Johnson and Jamie Dornan as Anastasia Steele and Christian Grey in the film of Fifty Shades of Grey: “Grey is not fascinating. He is not complex. He’s not even binary. Christian is one shade of psychopath – getting off on hurting Mommy by using Anastasia as a surrogate”

Poetic justice would have been served if in the fourth novel in the Fifty Shades of Grey series, Christian Grey himself had submitted to the plastic ties, blindfolds and genital clamps. In this story, told from Christian’s point of view, Christian would have had to sign a contract allowing himself to be whipped, caned, paddled and hot-waxed. Anastasia Steele would have gone from submissive to dominant and told this narcissistic “hero” where to go.

Grey instead explains to us in 559 pages why he’s a sadist. EL James has said that her fans have always been fascinated by this question. Well, guess what? It’s not that complicated. It’s all “Mommy’s” fault. She let her little boy’s green toy car go missing under the sofa, causing recurring nightmares for the international billionaire.

Christian’s blank-eyed crack whore of a mother was physically present, and yet not emotionally present, forcing young Christian (what sort of a crack whore calls her son Christian?) to seek therapy by means of sadomasochism with the willing young virgin, Anastasia.

During all these long years of compulsory beach reading and a so-so movie – the torture our hero was imposing on Anastasia was actually therapy for him. Grey can be read as a sadist’s self-help book, justifying the need for wounded men to control women. And justifying women’s fantasies of being controlled.

Christian gets off on Ana being tied up, lost, entranced under his spell. Actually she’s tied up and blindfolded so hasn’t much choice, but he doesn’t seem to be able to see that.

And nor does she. Generous, clever, beautiful and sensual Anastasia will put up with anything as long as there’s a new handbag in sight. Yet now EL James wants us to believe in her as self-sacrificing therapist. That’s why she allowed herself in three previous books to be whipped and iced and put on a special diet: she was the healer in the relationship. She was Christian’s real Mommy.

What a load – as in 125 million advance order copies of Grey by EL James have been released worldwide today.

But now even the “fans” are rebelling. After all, this is just the same series of books rebooted from the man’s point of view. James, who has earned €75 million from the series, hasn’t even had to struggle with novelistic plot and structure. We learn nothing new, apart from the fact that Christian Grey has serious Mommy problems, which we knew already.

Why women wanted to fantasise about being subjected to a misogynist in the first place is a disturbing question with even more disturbing answers. It’s been theorised that in an age when men are being feminised due to equality, what women really want is a bad, bold man to dominate them.

“Christian is a complex character,” James has said, “and readers have always been fascinated by his desires and motivations.”

No, he is not fascinating. He is not complex. He’s not even binary. Christian is one shade of psychopath – getting off on hurting Mommy by using Anastasia as a surrogate. And the saintly Anastasia, who gets off on pleasing her man, will be his Mommy forever.

If only his real Mommy hadn’t let that little green car go missing under the sofa.