Grace Wells on Jewtown by Simon Lewis: writing a people back into Irish history

Jewtown’s importance lies in the poetry’s quality, immortalising an almost-forgotten part of Irish history and telling us so much about the immigrant experience 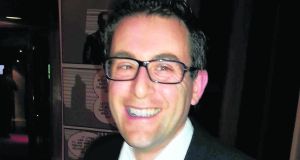 Simon Lewis: “As with the very best works of art,” writes Grace Wells, “Jewtown finds a way to say the unsayable, to communicate the incommunicable, and to leave us holding provocative and uncomfortable truths that we are able to bear because they are stitched together with the gilt thread of Simon’s poetic art”

Firstly I want to say how very honoured I feel to be launching Simon’s beautiful book, Jewtown. Honoured and moved.

This isn’t an ordinary collection of poems, it’s a very special, very rare book. I’ve been at so many launches where someone has grandly said: “this is an important book”, and I’ve inwardly cringed. But I genuinely believe that this is an important book. Its importance lies in three things, firstly: in the quality of its poetry, secondly: that this book recreates and immortalises an almost-forgotten part of Irish history, and thirdly because Jewtown tells us so much about the immigrant experience.

These are beautiful poems. Poems of elegant simplicity and poise. There isn’t a word out of place. Simon Lewis is a real craftsmaster. All of these poems have been scrutinised with a perfectionist’s eye, and a modest heart. Simon himself hardly appears in the book at all, the poems belong instead to Jewtown. Through them we become intimate with a place and a people. Simon writes in the voices of its disempowered immigrants, telling us their stories with a deft and subtle hand.

The poems are an elegant mixture of emotional subtlety and visceral power. They have an immediate, double-edged impact, so that we really experience the realities of Jewtown in 1890s Ireland. We find ourselves there, in the houses, on the streets, in their lamplight, and we are also immediately enmeshed in the poignant and haunting emotional reality of that life. What stays with us long after the reading, is both the impact of those personal stories, and a lasting sense of Simon Lewis’ tremendous compassion for humanity.

But this isn’t just a collection of tender and humane poems, it is an important historical work. As I say on the back of the book, “History would like to tell us Jewtown no longer exists”. We read Irish history and the Jews have been written out. With Jewtown, Simon Lewis has written their place back into the tapestry of Irish culture. And written them back in, in a most compelling way. Last year Ireland was glued to Brooklyn, and its portrayal of Irish emigrant experience, but what Simon has done is show us that the very same experience also happened here.

And there’s something that I really feel we need to be aware of, and wary of, which is that this book and these stories has taken so long to arrive. It’s as if the tongue of these people was silenced. Their forgotten stories are only now, generations later, finding voice through Simon. We need to be careful, that we, as a culture, don’t continue to silence the immigrant voice.

I said at the beginning that I was both honoured and moved to be launching this collection. I’m moved because my great-grandmother was Jewish. Her family fled from Poland in the 1890s. Very little of their story has survived. The family are said to have arrived in winter, with few possessions but wearing layers of fur coats. They sold their coats, and set themselves up as furriers in London’s East End, where they changed their name to Fox. My great-grandmother, Selema Fox, scandalised her family by taking up with a Christian, and our Jewish heritage was lost.

I’m moved that in our ancestral psyche, Simon and I both have this emigrant experience, and that destiny has unwound its way across countries and down through years and generations, to bring our two stories together through Carlow Co Council’s Literature mentoring scheme, where I first read Simon’s poems, and saw their great power, and, as an already published poet, gave him the blessing that he needed to know: that his was excellent work, which would one day be published in book form.

I’m delighted that that day has come, and I’m very moved to be here launching this book and feeling that something from the immigrant experience that we both have in our blood and bone has been fulfilled.

When someone is forced to leave their country for whatever reason, they are required to leave behind the skin of all they ever were. Fleeced of a whole life, they are whittled back to their essence, to the bare soul. But how that soul becomes clothed again in the new life, in the new place, is not so much to do with how much that person strives to overcome all obstacles – but much more to do with the kind of skin the new place enables the migrant to wear. Enables, or restricts.

The importance of this book is that it isn’t just poetry, it isn’t just history: Jewtown is about 21st-century Europe, and 21st-century Ireland. It’s not a polemic, it’s not a political report, it’s not a list of statistics, it’s a work of art, and as with the very best works of art, Jewtown finds a way to say the unsayable, to communicate the incommunicable, and to leave us holding provocative and uncomfortable truths that we are able to bear because they are stitched together with the gilt thread of Simon’s poetic art.

With this collection of haunting poems about the lives of ordinary people who lived more than a century ago, Simon is laying down the gauntlet of our own lives. Jewtown is truly a book for our times.

Jewtown is published by Doire Press. Grace Wells is a writer and poet