Find Me - a bold sequel to Call Me By Your Name 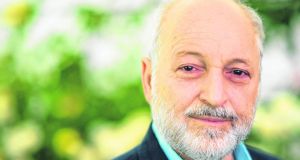 Andre Aciman: news he was writing a sequel to his beloved novel, 12 years and over 300,000 copies later, courted cynicism. Photograph: David Levenson/Getty

“I would actually love a sequel to Call Me By Your Name. In fact I am writing one.” It was with these words that André Aciman announced Find Me to the world and, subsequently, broke literary Twitter. Reading them now, severed from their context and almost a year later, they seem so innocuous. Yet, empires fell that night.

CMBYN (as it is often initialised) is a novel that can proudly brandish the title of cultural touchstone, one of those generation-defining works that can be found on the bookshelves of anyone under the age of 25, nestled somewhere between Normal People and Dolly Alderton’s Everything I Know About Love. The novel has also been lovingly embraced by the queer community because it’s that rare thing of a literary gay love story where neither person dies at the end.

Therefore, news that Aciman was producing a sequel to his most beloved novel, 12 years and over 300,000 copies later, of course courted cynicism. Aciman’s plan to revisit his characters several years after the events of CMBYN raised eyebrows because the original novel ends with a scene in which we revisit the characters several years later. Also news that our protagonists, Elio and Oliver, now live completely different lives on separate continents caused many of the original novel’s diehard fans to believe that Aciman was besmirching his own masterpiece. Simply put, a sequel to CMBYN sounded about as good an idea as a sequel to, I don’t know, To Kill A Mockingbird or The Handmaid’s Tale.

Yet, Find Me completely won me over. But it is a novel that is almost guaranteed to divide readers. Those picking up Find Me expecting to revisit the bucolic romance of Elio and Oliver among the peach trees and the flirtatious renditions of Bach’s Capriccio in B flat major will be surely devastated, for Aciman has produced a work that is almost brazenly the antithesis of fan service.

The novel is split into four independent episodes with several years passing between each. The first, and largest, of these episodes is from the perspective of Samuel Perlman, Elio’s father. This perspective comes as something of a surprise to readers because Mr Perlman is very dead at the end of CMBYN, Elio having scattered his ashes “in the Hudson, the Aegean, the Dead Sea”. And this isn’t the only moment where the timeline in Find Me requires such mental choreography on the part of the reader that, unless you’re literally Sylvie Guillem, I wouldn’t even attempt to tackle.

Within the first few pages, the reader discovers that Mr Perlman and Elio’s mother have divorced, realising only after Elio moves to the States for college that their son was the only thing keeping them together. Roughly 10 years after the summer of CMBYN, we meet Mr Perlman, bachelor, on a train journey to Rome to visit Elio, who has since become a famed and in-demand concert pianist. The episode follows a Before Sunrise-like structure where Mr Perlman strikes up a friendship with a woman sitting across from him on the train and they embark on an impromptu sojourn through Rome.

There’s no denying that this episode is meandering and bloated. Taking up nearly half the novel’s length, fans of CMBYN will be wondering why the hell they’re reading this seemingly extraneous novella about someone whose name is neither Elio nor Oliver. And sadly this isn’t the only misstep Aciman takes with this episode.

The overt heterosexuality presented throughout is tiring and, at times, leering. Mr Perlman’s fawning over the woman, who we are regularly reminded is half his age, evokes the filmography of Woody Allen, which is to say that witnessing it makes the reader feel like they’re complicit in something.

The remaining three episodes, which make up the novel’s second half, are thankfully from the perspectives of Elio and Oliver and display Aciman in familiar top form. We visit Elio as he awkwardly accepts the compliments of a much older man at the intermission of a chamber quartet recital and fumbles into a romance with him, leading to an odd but not unenjoyable musical mystery plot. Oliver, meanwhile, is attending a party being held in his honour when a familiar tune being played on the piano proves to be a Proustian madeleine too far. Over these pages one senses that Aciman feels truly at home when moonlighting as his two most famous characters.

I finished Find Me with a new-found respect for André Aciman. He simply could have just listened to the fans and rehashed his first novel and cashed in on that. Instead, Aciman has, rather boldly, decided to just write an Aciman novel. Those familiar with the author’s other works will see this novel as business as usual (for example, fans of Aciman’s brilliant early memoir Out of Egypt will understand the resonance of the location in which he sets his final episode). However, those who only know Aciman from CMBYN will be taken aback by his refusal of satisfaction and minimalist plotting, all of which are characteristics of his wider oeuvre.

Hence, the reaction to Find Me will surely be mixed. But those of us able to recognise that this isn’t Call Me By Your Name will be impressed by Aciman’s delicate and audacious novel. To call it a sequel would be dishonest, and I feel many people will be let down by expecting a sequel. So, to borrow from the language of music as Aciman so frequently does, think of Find Me as CMBYN’s coda, the final flourish that ends a great work.