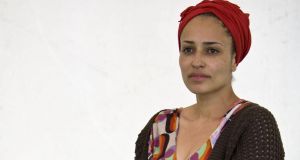 Zadie Smith: makes the reader see things they should have seen but never did. Photograph: David Levenson/Getty

The subjects covered here are vast: art, cinema, dance, music, literature, life. The pieces that open the book are the weakest, particularly those on British politics, perhaps because they were all written for US publications and tend to stick to the surface as a result, though there’s no doubting the force of Zadie Smith’s feelings on the “arsonists” behind Brexit, or her passion to explain (again, to a US audience) the importance of state involvement in everyone’s lives. Or perhaps it’s because she is “by nature not a political person”. Then again, through the rest of the book, Smith repeatedly disclaims her own expertise on everything (“a casual appreciator of painting, a dilettante novelist, a non-expert”), then dazzlingly proves herself wrong.

This is part of a technique that we see throughout this collection. Smith breezily welcomes us in, giving the reader a personal memory or a popular culture comparison, denies her own ability, and then writes rings round us. She worries that an earlier draft of one essay was “too formal or cold”. On Kierkegaard’s Fear and Trembling, she observes that it contains an opening section that “many people (including me) skip, in confusion”. When exploring Jewish philosopher Martin Buber’s essay I and Thou, through reference to paid sign-and-greets with Justin Bieber, she pauses: “This is a bit perplexing; I need to unpack it a little for myself.” Yet into another essay she can drop Parmenides and Heraclitus in the same sentence without sounding forced.

There is something performative in this (false) modesty: “I have no real qualifications to write as I do”. Smith’s qualifications are an embarrassment of vision, intelligence and style; for most of us, reading Smith’s smooth erudition gives that sense of “a transfusion from above” that Martin Amis described when reading Saul Bellow. But there’s more to Smith’s success than this.

She is a great communicator of joy. The best essays here achieve this, and the standard is set by Some Notes on Attunement, an account of how, during a long car journey with her husband, Smith went from believing that Joni Mitchell’s voice sounded “like a bee caught in a wing mirror” to finding “an almost intolerable beauty” in her music – all explained clearly and convincingly via Wordsworth, Seneca and Kierkegaard. Similarly, Smith makes Christian Marclay’s film The Clock – which lasts for 24 hours and comprises solely clips from other movies, containing references to each minute of time from midnight to midnight – sound as if it really could be “sublime, maybe the greatest film you have ever seen”. This is because “you don’t feel you are watching a film, you feel you are existing alongside a film”. It is “a joyful art experience but a harsh life experience because it doesn’t disguise what life is doing to you”.

Smith has, also, the simple declarative rightness of a good critic that makes the reader see things they should have seen but never did, and a weapons-grade succinctness with which to deliver it. So in writing about JG Ballard’s Crash, she notes that the “iciness” of Ballard’s style “is partly a consequence of inverting the power balance between people and technology, which in turn deprives his characters of things like interiority and individual agency”. Mark Bradford’s short film Niagara, inspired by Marilyn Monroe’s famous walk in the movie of the same name, depicts a man sashaying away from the camera, and inspires Smith to sum up “camp” as “doing more than is necessary with less than you need. The less-than-you-need part is important. Camp begins in lack, in absence. It is the nuclear option of the disenfranchised”.

Above all, Smith works very hard not to daunt the reader, to give us a good time even when the subject of the essay is something we didn’t know we were interested in. For example, her regular but short-lived book review column for Harper’s (more coyness: “I said yes. I lasted six months”) is sufficiently rich and detailed to leave the reader with a wishlist comprising most of the titles under review, though it’s never quite clear if we would enjoy reading, say, Ian Thomson’s book on Jamaica as much as we like reading Smith telling us about it.

Everyone has opinions, but those that treat the reader with respect will be most likely to convince

Another way of putting this is that these essays are not just consequences, descriptions of something else: they are a primary source, full of sentences that have been, as George Saunders put it, the subject of so much concentration that they have become a thing in the world. On artist Lynette Yiadom-Boakye, Smith writes that “everyone is born with a subject, but it is fully expressed only through a commitment to form”. Similarly, everyone has opinions, but those that treat the reader with respect will be most likely to convince.

This is a big book. Reading it as a reviewer does – bingeing on it like a boxed set – is useful for spotting trends and traits, but it can feel like too much confectionery, too rich. Instead, treat each essay as a short story, and consider Mavis Gallant’s advice: “Stories are not chapters of novels. They should not be read one after another, as if they were meant to follow along. Read one. Shut the book. Read something else. Come back later. Stories can wait.” Essays can wait. Take this approach, and Feel Free will keep you company – good company – for a long time to come.