Feck! A history of swearing from the very first F to the 21st C

The author of Holy Sh*t, A Brief History of Swearing explains how swearing has evolved from Ancient Rome and Biblical times to today and even hints at what the future holds 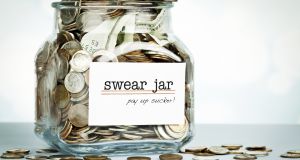 In many Catholic countries, swearing never made a full transition from religious oaths to sexual/excremental obscenities. In Québec, for example, many of the very worst swearwords are religious in nature, including tabarnak (the tabernacle), câlice (chalice), and ciboire (the ciborium, a container for the Host)

“Swearing” in the Bible refers to oaths, promises before God that your words are true or that you will do what you say you will. God wants people to swear by his name – in the early parts of the Bible we can see echoes of a war Yahweh (the Abrahamic God) is fighting against other Near Eastern gods such as Baal and El. When you swear by Yahweh, you acknowledge that he is omniscient and omnipotent, able to hear your oath and punish you if you swear falsely. You implicitly acknowledge that he is the best, the only God. Vain swearing is forbidden by the third Commandment, for if you swear falsely and God doesn’t punish you, it implies weakness, through the same logic.

3. “By God’s bones!”– The worst thing you could say in the Middle Ages

This is the kind of vain swearing the Bible is worried about. Such oaths were the most obscene language of the Middle Ages. There are many versions – “by God’s wounds,” “God’s nails,” “by the blood of Christ,” etc., as you could swear by more or less any body part. These phrases were so offensive because they were thought to be able to rip apart the body of Christ as it sits at the right hand of God in heaven, in a perverse version of the Eucharist that creates God’s body on Earth.

4. Gropecuntelane – Many of today’s obscene words were not offensive in the Middle Ages

Although many of today’s swearwords were in use by the 15th century, they were not obscene at this time. They were simply direct terms for the things they represented. Words that are obscene today appear everywhere in the Middle Ages, in street names (Gropecuntlane, Shitwellway, Fuckinggrove), personal names (Gunoka Cuntless, Godwin Clawcunt, Thomas Turd), the names of common plants and animals (a heron was a shiterow; the medlar was the open-arse tree), in literary texts and medical treatises (“in women the neck of the bladder is short and is made fast to the cunt”), and in translations of the Bible (“the Lord will smite you with the boils of Egypt [on] the part of the body by which turds are shat out”).

5. Roger Fuckbythenavel – Scholars argue about when the f-word was first used in a sexual sense

The name Roger Fuckbythenavel was recently discovered in the Chester County Court rolls of 1310-11. It has reignited debate about when the f-word was first used in a sexual sense. There are earlier examples of it in names – John le Fucker (1278), Henry Fuckbeggar (1286), Simon Fuckbutter (1290)– but scholars usually explain them away as misspellings or closely related to Germanic words meaning “to hit” or “to strike”. Henry would then be known for walloping beggars, not sleeping with them. The first “real” use of the f-word is thought to occur in a poem partly written in cipher from around 1475, which complains that some monks are damned because they “fuccant” women around the monastery. Fuckbythenavel could be an example of either sense, really– it could refer to striking someone in the belly or some sexual proclivity (or youthful error?). Without context, it is impossible to tell.

6. An envious Windfucker – Modern swearing began in the Renaissance

In the Renaissance, the power of oaths began to decline. From the worst, the most shocking words a person could utter, they became mild expletives, only slightly more offensive than “um” or “uh”. 17th- and 18th-century conversations were peppered with ‘sblood (“God’s blood”), zounds (“God’s wounds”), and a new one, bloody. Words that were simply direct in the Middle Ages started to take over as the new obscenities. The transition was rough, however – sometimes words were censored, and other times they still appeared in print, as when in 1616 George Chapman published a beautiful, expensive edition of Homer but in it attacked one of his critics as “an envious Windfucker”.

7. Inexpressibles, limbs, and osculation – The Victorian era was the age of euphemism

The sexual and scatological obscenities were at their most offensive during the Victorian era. These words disappeared from print and most speech, and any word that even pointed roughly in their direction was euphemized. Victorians therefore avoided trousers and instead referred to inexpressibles, indescribables, etceteras, unmentionables, ineffables, indispensables, innominables, inexplicables, and continuations. Leg became limb or, even better, lower extremity. Kissing became osculation; people stopped sweating and started perspiring.

8. Our brain processes swearwords differently from other language

In our brains, swearwords are stored and processed differently from other language. Most propositional speech-words strung together in an original form-is a product of the left hemisphere of the brain. Swearwords, though, come mostly from the limbic system in the right hemisphere. People whose left hemispheres have been destroyed by strokes or Alzheimer’s disease can often still swear. The limbic system records the emotional content of words, which is why swearing really does work to relieve pain and frustration, and to praise or insult other people. These words access and give vent to our emotions in ways other words cannot.

9. Epithets will be the swearwords of the future

Today the worst words in the English language are the racial slurs, but we are getting more and more offended by epithets of any sort. It is becoming more and more taboo to essentialise anyone or anything in a single word, as epithets do, whether that word sums up a person by race, mental acuity (retard), physical disability (cripple), or size (fat). These are the swearwords of the future.

10. Many mallachtaí or Irish curses are still religious, not sexual or scatological

In many Catholic countries, swearing never made a full transition from religious oaths to sexual/excremental obscenities. In Québec, Canada, for example, many of the very worst swearwords are religious in nature, including tabarnak (the tabernacle), câlice (chalice), and ciboire (the ciborium, a container for the Host). Irish follows a similar pattern – much of its swearing still involves curses that draw on the power of God and the Devil, such as “Go hifreann leat” (To hell with you!), “D’anam don diabhal” (Your soul to the Devil!), and “loscadh is dó ort” (Scorching and burning upon you!).

Holy Sh*t A Brief History of Swearing by Melissa Mohr is published by OUP, £16.99