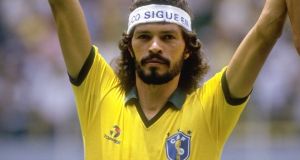 Sócrates: “I never think about what might happen tomorrow, man, never”

“I smoke, I drink and I think” is not the sort of thing professional soccer players usually say. It’s more what you expect to hear from a truculent student posing as a rebel intellectual. Sócrates was striking at least half a pose when he delivered that line, but in it you can detect an unmistakable note of the obstinacy that was his gift and his curse.

The man who captained the brilliant Brazil team at the 1982 World Cup emerges from Andrew Downie’s biography as a charismatic, yet melancholy character, a self-styled free spirit who was not really free.

As a footballer, the gaunt, bearded Sócrates had the gift of being instantly memorable. The distinctive elegance of his play was accentuated by the striking dimensions of his physique.

Known to his friends as Magrão (Big Skinny), he was 6ft 4in tall and weighed just over 12½ stone. Lacking power and stamina, he avoided physical tussles and developed a serene, one-touch playing style in which the ball did all the work.

Work and Sócrates never did get on. Clever enough to pass exams without study, and skilful enough to score goals without training, he became both a medical doctor and an international footballer without too much effort on either front.

The eldest son of a tax inspector, he became almost as famous for his liberal political activism as for his soccer. Downie shows that his political consciousness evolved out of pragmatic self-interest.

Most successful soccer players adapt their lifestyles to the obligations of the profession. Sócrates’s idea was to do it the other way around.

He was largely apolitical until his mid-20s, when he outmanoeuvred his club, Corinthians of São Paulo, in a contractual dispute. The experience opened his eyes to the potential rewards of fighting the system. The players had power if they could only learn how to wield it.

Of all the conservative traditions of Brazilian soccer, none annoyed Sócrates more than the concentraçao, the practice of requiring players to spend the night before a match in a hotel with the rest of the team. The idea was that they could relax and focus on the game, free from distraction.

This seemed exactly wrong to Sócrates, who lived for distraction. As his brother Raimundo said: “He wanted to be at home on a Friday or Saturday night, drinking his beer.”

In 1981, Corinthians appointed a new director of football who canvassed the players’ opinions on how the club was being run. Sócrates and other senior players seized the moment. Before long, decisions that had always belonged to a handful of senior officials were being discussed and voted on by everyone at the club. Naturally, the agenda of what became known as Corinthians Democracy closely tracked the agenda of its founding father. The days of the Corinthians’ concentraçao were numbered.

Self-serving though Sócrates’ initial motivations were, he soon saw that the movement had a wider resonance in Brazil, which was then still ruled by a decrepit military dictatorship. The existence of something called Corinthians Democracy at one of the country’s most famous clubs was a standing rebuke to the generals.

As his fame increased, so did his activism. “He positioned himself as a spokesman for Brazil’s poor,” Downie writes, though he gives little detail on Sócrates’s actual political programme. One suspects that a man who said things such as, “I don’t want to commit myself to being coherent” was attracted more by the radical chic than the policy positions. When Sócrates celebrated goals with a raised fist, it wasn’t to express any specific political point. It was because he had seen Tommie Smith and John Carlos do it at the 1968 Olympics and thought it looked cool.

He did, at least, widen the political conversation. Nobody would have noticed Sócrates’s activism if he had been a mere politician, but as the national soccer captain he commanded the attention of every layer of society. “For the first time in Brazil’s history, a sportsman had a megaphone and fans were listening,” Downie writes.

In 1984, Sócrates left Brazil to become one of the worst foreign signings in the history of Italian football. Italy’s league was the hardest in the world, and his new team-mates at Fiorentina had no time for a lazy, chain-smoking maestro who expected others to do his running for him while he concentrated on drinking and thinking.

The nightmare season in Italy makes for a darkly amusing chapter. “Football was fun to him,” team-mate Celeste Pin tells Downie. “We thought it was strange. Maybe it’s like that when you’re a kid, but not when you’re a professional.”

Sócrates always professed to stand for freedom and self-expression, but his philosophy was riddled with destructive contradictions. He rejected authority, yet gave in to every wasteful impulse; he rebelled against responsibility, yet was addiction’s obedient slave; he scorned conformity, yet his life after football unfolded as one long, dismal cliché.

Retirement gave him more time to consider how bored he was with his marriage to Regina, with whom he had four sons. “It just doesn’t feel right,” he complained. His exasperated father replied: “Son, what marriage ever feels right?”

He left Regina for Silvana Campos, a tennis player 12 years his junior. His attempt to resume his medical career ended in failure.

“I never think about what might happen tomorrow, man, never,” he reflected. “It drives my wife crazy. She’ll say, ‘Let’s plan ahead’, and I say, ‘Forget planning ahead! Let’s live, let’s live!” Silvana soon filed for divorce.

Sócrates married twice more and dabbled in painting, poetry and spiritualism, but only drinking had his full commitment. Some bars let him drink for free because his presence attracted other customers. “Every day was a party” according to a girlfriend, Maria Adriana Cruz. He would start drinking at midday and finish late at night. “That was every single day.”

He objected to being called an alcoholic. “It’s all semantics. People should do what makes them happy . . . I’m not dependent on alcohol. I don’t need cigarettes, even though I smoke. That’s my personal choice.” He died in 2011, aged just 57, insisting to the last that he was free.

One World: Together at Home – the Irishman who got Lady Gaga to say yes
4

Good News: A coronavirus black comedy, and five other things we like today
Real news has value SUBSCRIBE