Denied: The Rise and Fall of Climate Contrarianism: The dirty tricks of an elite clique unpicked

Review: Author Richard Black admits it is ‘a book that . . . should not be needed’ 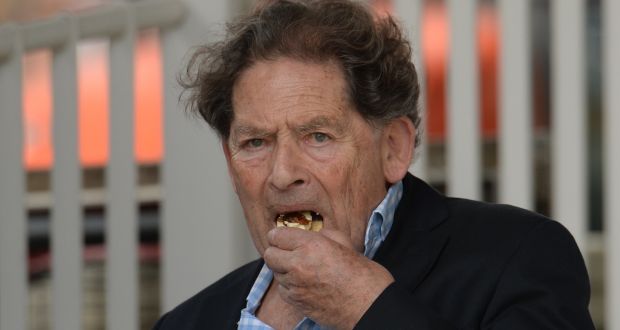 Former UK chancellor of the exchequer, Nigel Lawson, enjoying a biscuit and cheese during the tea break of a cricket match between England and South Afri in London on July 17th, 2017 Photograph: Philip Brown/Getty

Book Title:
Denied: the Rise and Fall of Climate Contrarianism

In the history of science, it is probable that no phenomenon has been as rigorously investigated over many decades by multiple scientific disciplines as climate change.

And with good reason. After all, the science of climatology is now warning with ever greater urgency that we stand on the cusp of potentially cataclysmic changes in the conditions of life on Earth.

Yet, in the face of this overwhelming international scientific consensus, there remains widespread scepticism within parts of the media, in politics and among some public officials.

Why? Richard Black’s intriguing new book, Denied: The Rise and Fall of Climate Contrarianism, attempts to explore this enigma, with a strong focus on the UK. It is, the author admits, “a book that, in a rational society, should not be needed”. But it assuredly is.

The role of the US energy industry in funding climate denial is already well documented. In our nearest neighbour, it took on a peculiarly British complexion, with at times as much outright farce as corruption at play. Black labels this motley band of egotists and eccentrics “conviction contrarians”.

While they initially had a value in raising some useful questions, these contrarians “now resemble nothing so much as a rhetorical version of Monty Python’s Black Knight, as it desperately tries to protect its intellectual hinterland”.

Although now looking decidedly ridiculous, these same figures have held a disproportionate degree of political sway. A big part of the reason, Black argues, is media collusion.

From a career journalist and former BBC news environment correspondent, this is a serious charge against his colleagues, but he amply supports it in this forensic appraisal.

The best known of these is Nigel Lawson (86), former chancellor of the exchequer. Neither his age nor his lack of relevant training or expertise has in any way dimmed Lawson’s belief that he has outfoxed the entire global scientific community.

His high media profile led to him being invited to “debate” with actual scientists on flagship BBC programmes.

Earlier this year, largely in response to public and scientific anger at repeated false statements made on air by Lawson and other contrarians, the BBC introduced new training materials for producers, presenters and reporters on climate change.

RTÉ, specifically PrimeTime, has had an ongoing problem with how to present climate change, and could sorely do with guidelines of its own.

Failing that, a copy of Black’s book on every Irish editor’s 2019 reading list might suffice, as it unpicks the full bag of tricks and tactics used by contrarians to promote carefully concocted false narratives regarding climate change and renewable energy.

“For anyone who cares about journalism, it is troubling to see the absolute lack of scepticism that editors display towards this tiny elite clique of commentators”, Black notes.

The three striking aspects of the UK contrarian commentariat are, he says, how small it is, how tightly knit and how effectively it has “penetrated some of the nation’s most important newspapers”.

Another clique member is Matt Ridley, best known as the first person to preside over the collapse of a British bank – Northern Rock – in a century and a half. Undeterred, today, he is an “adviser” to Lawson’s secretly-funded denialist think tank, the Global Warming Policy Foundation, and a high profile media columnist.

No doubt his hostility to climate science is in no way influenced by the fact that he operates two coal mines on his 8,500 acre estate.

Black patiently unpicks Ridley’s faux analysis, showing how he systematically skews source material such as IPCC reports to produce lines like: “Nigel Lawson was right after all”.

Pointing out how, despite the contrarians, the average British person is worried about climate change and supports renewable energy, Black confides: “I think the point has never been to sway public opinion, but to impact politics.”

Other high profile contrarians look and sound like they’ve walked off the set of an Ealing comedy. James Delingpole is to contrarianism what Jacob Rees-Mogg is to Brexit. In the Daily Telegraph in 2013, Delingpole wondered aloud whether a named climate scientist should be hanged or given the electric chair. This is all very droll until actual people start getting killed.

Black sees the concerted efforts of these well-connected contrarians as “an attempted coup – nothing less than the hijacking of the narrative by a tiny group of the political and media elite, using a set of arguments that increasingly diverged from reality”. Their tactics included “personal vilification and manufactured attacks . . . you may of course argue with the word ‘coup’ if you like. But I for one am stumped for a better term”.

While climate contrarianism has been grossly overrepresented in newspaper opinion columns, Black’s eminently readable account leaves the last word to David Aaronovitch from The Times in 2016: “When it comes to fear, prejudice, poor science, confirmation bias and conspiracism, few lobbies can match the anti-man-made-climate-change brigade.”

Michael Stipe: ‘Cold-ass b**ch was a coat I put on to protect myself. I can take it off now’