Creativity in captivity – capturing what is unique about prison writing

Rivkah Zim on her new book, which explores the works of such writers as John Bunyan, Primo Levi, Oscar Wilde and Anne Frank 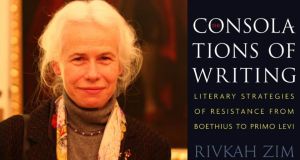 Rivkah Zim: Why did so many persecuted prison writers risk so much to write and what did it mean to them? Were there any similarities between dissident intellectuals in prison that might be part of a larger history and politics of prison writing? Was there something both distinctive and paradoxically universal about all these prisoners’ writing and could it say something about the relationship between life and literature?

Inspiration came with the snow. One glorious, snowy February day in the late 1980s I was due to give a lecture in Cambridge on devotional English literature composed by prisoners in the Tower of London towards the end of Henry VIII’s reign. (I’d recently finished my first book on sixteenth-century English metrical psalm versions, which includes a chapter on how the biblical poetry of praise and prayer in the Psalms had provided familiar models for new personal prayers written by prisoners.) It remained to be seen whether that topic would engage these students!

When I entered the room they were absorbed by the view over the Backs from the top floor of the lecture theatre building, and they ignored me. Well, that was no surprise. The Backs of the great colleges, alongside the River Cam, were covered in thick snow and the soft fat flakes that floated past our window were entirely fascinating. Our old familiar world was transformed and every glance provided new feasts for the eyes, and intriguing, fresh images of familiar places. Life and art were joined in beauty; it was breathtaking. Nevertheless, we were there for a particular purpose. How could I turn their attention?

I remembered lines by a recently released Russian dissident poet, Irina Ratushinskaya, about the inspiration she had found, alone in the freezing conditions of her punishment cell, in the sight of “a frost covered window”. This was the first beauty she saw in captivity,

“a blue radiance on a tiny pane of glass / A cast pattern – none more beautiful could be dreamt! / The more clearly you looked the more powerfully blossomed / Those brigand forests, campfires and birds!”

A world beyond her prison cell was accessible in imagination; the complex beauty of each unique crystal sparked visions of warmth, wildness, companionship and freedom. The poet compared her insight to a gift – a kind of baptism – that was only needed once in life. This idea was both an inspiration and a transformation. The authority of experience seemed to radiate from her words and, as I spoke about her assertion of liberty through mental power and the freedom of the mind to transcend or mitigate horror, the students seemed impressed and moved. And I recognised two elements that became central to this new book: the idea that creativity must transcend constraints and confinements of various kinds and that, as Brian Keenan later wrote of his imprisonment, its strange reality, seemingly “so far removed from normal human experience”, paradoxically revealed “so much more of what we are as human beings”.

The magic of the snow had shown us a new way into an old problem. As we turned our attention from that snowy scene of contemporary Cambridge to Thomas More and other prisoners in Tudor England, we had gained a new empathy with these writers and greater appreciation of their powers of consolation and liberation in creativity.

After the snow melted the memory of the imaginative leap we seemed to have made together that day remained in my mind. Why did so many persecuted prison writers risk so much to write and what did it mean to them? Were there any similarities between dissident intellectuals in prison that might be part of a larger history and politics of prison writing? Was there something both distinctive and paradoxically universal about all these prisoners’ writing and could it say something about the relationship between life and literature?

Their literary strategies of resistance can be traced back into late antiquity and the extraordinary dynamism of Boethius’ Consolation of Philosophy that represents the testimony of a political prisoner condemned to death. In the early sixth century Boethius had yoked dialectical reasoning with lyric poetry and this final work had captivated western readers throughout the Middle Ages. Why was it so enduring?

This was not dry philosophy but a journey through eternal mysteries of injustice and suffering by a man who claimed direct experience of both. Yet, Boethius’ most radical creation was a fantasy: an elderly feminine figure, of variable height, who sits by the prisoner’s bed to wipe away his tears with the hem of her tattered dusty dress. Lady Philosophy then delivers her talking cure for his desolation and self-pity in the tough love of dialectic, although she stops along the way to refresh him with songs. Here was another new way into old problems that brought compassion and imagination to bear on human experience.

Eventually I settled on the works of 10 other exceptional men and women from different periods of western history and European language cultures and arranged them in pairs to illustrate three principal explicit functions for their prison writing.

The defence of ideas and values is foremost in writing by Boethius and a twentieth-century counterpart, Dietrich Bonhoeffer, as well as that by Thomas More and a modern counter-reformer, Antonio Gramsci. Other prisoners wrote primarily to defend and preserve images of themselves, such as the writing of memory and self-justification by John Bunyan and Oscar Wilde, each of whom sought to shape readers’ responses to their experience of “grace” and “disgrace abounding” in new life-writing that made a virtue of necessity from haunting memories.

Wilde decided that the two turning points of his life were when his father sent him to Oxford University and society sent him to jail. His claim that “prison life makes one see people and things as they really are” gave him the opportunity to change not only his own outlook on suffering and imprisonment but also the incentive to resist and revise negative views of his life and reputation, because, as he argued, “it is by utterance that we live”: in an eternity of fame, by writing De profundis.

The memorial narratives of Madame Roland and Anne Frank, and the consolations of imagination in preserving the liberty and the lives of the poets Jean Cassou and Irina Ratushinskaya, offer different forms and themes in writing to preserve and console the writers’ self impressions. Each of these 10 different kinds of prisoner wrote in the moment, as they endured captivity and persecution. The final subject of my book is Primo Levi who wrote exceptionally with hindsight, in a 40-year writing career dedicated to various kinds of testimony for humankind, after his release from Auschwitz.

Most people would describe all these prisoners as men and women of conviction rather than ordinary convicts. Many of them are well known and their works have been discussed independently in specialist studies. Yet their different kinds of writing in captivity have never been read alongside each other so closely. In addition, existing studies of such celebrated intellectuals as Gramsci or Bonhoeffer tend to concentrate on their ideas, whereas the literary tactics that give these ideas their vitality and impact are seldom addressed.

I was interested in examining the functions of various recurrent themes and forms, such as dialogue of various kinds (including the implied dialogue of correspondence), lyric poetry and the life of the mind, tropes of the free mind and escape by flight, memory, dreams and death, several versions of the paradox of gain by loss, favourite biblical allusions to the lives of Jonah, St Peter and Jesus, the importance of family relationships, as well as the intriguing significance of a feminine “other”, including Boethius’ Lady Philosophy and Anne Frank’s Kitty.

These recurrent themes suggested that there was indeed something distinctive about prison writing by dissident or persecuted individuals that amounted to more than a collection of works by writers in captivity. Placing these works alongside each other in unprecedented pairings also made it easier to see how and why these authors’ uplifting responses to terrible circumstances have helped others to find ways to live their own lives.

The ghost of Boethius – proud father, loving husband, poet, theologian and philosopher, fatally tempted into politics – has walked through prison walls down the centuries.

The Consolations of Writing: Literary Strategies of Resistance from Boethius to Primo Levi, by Rivkah Zim (Princeton University Press)