Colum McCann: ‘He knocked out all my teeth. I laughed it off at first’

A vicious attack outside a Connecticut hotel left the Irish novelist not only needing new teeth but also facing a dilemma about his new book, which features a similar incident 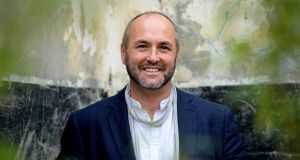 Colum McCann is well known in Ireland as a storyteller. As a novelist he has re-created the stories of the ballet dancer Rudolf Nureyev, the highwire walker Philippe Petit, a Slovak Romani woman and the aviation pioneers Alcock and Brown.

But now he has a story of his own to tell. It forms the background to his new book, a novella and three stories called Thirteen Ways of Looking. Unlike the beautifully crafted works we associate with McCann, however, this one is messy, makes little sense and is upsetting both for him to tell and for the listener to hear.

In other words, it’s real.

It begins something like this. On June 28th, 2014, McCann was the keynote speaker at a conference in New Haven, Connecticut. Returning to his hotel after dinner at a restaurant, he saw what he describes as a couple of people scattering on the street.

“There was a man beating a woman, so I went over. I didn’t get physically involved at all, but I told him, in a not very polite way, to stop.”

The woman was lying on the ground; the man was big, white, built like an American footballer. “I was prepared to turn and flee if I had to,” says McCann.

But, to his astonishment, the man responded to his intervention by walking away. “I got down on the ground and lifted the woman up. I asked her did she need help, and did she want me to call the cops. She said no, and she walked away. I went back to my hotel.”

That same day, back home in New York, McCann’s 15-year-old son, John Michael, had won a big race at the state cycling championships.

“We were talking about it on the phone,” McCann says. “He was all happy, so instead of going into the hotel and having the signal cut off when I went into the lift, I decided to just pace up and down outside the hotel. I woke up two and a half hours later, going into an MRI machine.”

He had been attacked from behind by the man from the earlier incident.

“I was knocked unconscious. Knocked out all my teeth; fractured cheekbone; severe contusions,” McCann says.

As is the Irish way, McCann played it down at first. “I sort of laughed it off a little bit, but it got worse and worse,” he says. “I had to get all my teeth replaced. But then what I term ‘the punch behind the punch’ kicked in; the emotional impact. And that’s what hurts the most.

“I had a few health problems last summer, more or less directly stemming from this, including shingles along the optic nerve and things like that, but anyway. I’m not fighting, but I’m fit again.”

It’s clear from McCann’s body language, and even the language he uses to talk about the incident – or, rather, the hurried, rather untidy way he talks about it – that it makes him extremely uncomfortable to do so.

Apart from a brief statement to the papers at the time, he hasn’t discussed the attack at length in any interviews. Now that his new book is coming out, though, he’s faced with a dilemma, because the novella is about an elderly man in New York who is brutally attacked after leaving a restaurant.

The fictional punch preceded the attack on McCann by some months, but the final story, Treaty, revolves around a woman’s recognition of a man who abused her.

“I didn’t use the incident as a launch pad to write these stories,” McCann says. “But somehow, like a double helix, it has wound itself into them. And I’m sure it appears in ways that I’m not even sure I can yet recognise. So do I speak about it or do I not? If I do, people might say, ‘Oh, he’s exploiting that situation.’ And if I don’t, they’ll say, ‘Well, he didn’t speak out about this incident.’ And what does that say about silence?”

One deciding factor was that after the attack hit the headlines he got letters from all over the world, mostly from women, many of whom had also suffered from violence.

McCann prefers to focus on these individuals rather than on his attacker, who was sentenced to two and half years, but served just three weeks, in jail. As the court case progressed, though, he had to write a victim impact statement.

“I called for him not to go to prison. I said that I forgive him, but I don’t excuse him,” he says.

He felt, he adds, that a spell in prison wasn’t about to change the man’s behaviour in any positive way.

Ironically, when McCann was attacked he had been giving a presentation about the concept of “radical empathy” in his capacity as a founder of an organisation called Narrative Four.

“We get kids together to tell one another’s stories, stepping into the shoes of somebody else,” he says. “We find that, particularly when you do it with young people of 16 or 17, they feel valuable, sometimes for the first time ever. And they go back into communities and start to change things.”

These communities might be in Haiti or Chicago or the Middle East. Violence, as McCann points out, is a global phenomenon. What happened to him could have happened on O’Connell Street or in Paris.

“I live in New York, which is pretty safe,” he says. “But for a few weeks, I have to say, I was aware of people walking up behind me and things like that.”

The main character in the new novella could hardly be more of a New Yorker. A retired Jewish supreme-court judge, Mendelssohn is not too steady on his feet, but he still has plenty of attitude.

The Wallace Stevens poem Thirteen Ways of Looking at a Blackbird is woven into the story, which also has elements of a whodunnit.

“So the novella and the stories, like anything I do, can be read on a number of different levels.”

One of the stories, What Time Is It Now Where You Are?, is about a writer writing a story about a woman marine in Afghanistan. Another takes its title from the Hebrew word for a parent who has lost a child, Sh’khol.

“I wanted to write about a woman in pursuit of a word, and I wanted the story to surprise,” McCann says. “How the story ended up being set in the Gaeltacht with a woman about to translate from Hebrew, I’ve no clue. Most of these things are a mystery. If you’re too aware of what it is you want to do, then you become locked down in it, too conscious of what you want to say. So much of writing is about not knowing where you’re going, and going there anyway.”

If McCann has learned anything from his horrific experience in New Haven, it’s that stories are an elemental part of life.

“What bugs me a little bit is that people see stories as some sort of airy-fairy thing,” he says. “But after having a roof over your head, and after companionship, your story is possibly one of the most important things that you can have – and it has a physical tangible currency, you know?”

As for his good deed, he’s not sorry. “If I was presented with the same situation today, I’d do the exact same thing. Except maybe I’d make a phone call from my hotel bedroom.”

Thirteen Ways of Looking is published by Picador. Colum McCann is reading at the Edmund Burke Theatre, at Trinity College Dublin, on Thursday (bookings at dublincityofliterature.ie) and at An Taibhdhearc, Galway, on Friday (cuirt.ie)