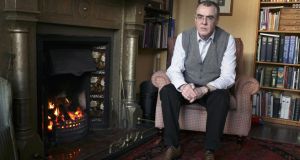 I’m writing this a day after returning from Ciaran Carson’s funeral in Belfast. He had a proper requiem Mass, though he wasn’t to my knowledge conventionally religious. It was accompanied by traditional Irish music, for flute, voice, fiddle: Last Night’s Fun, The Battle of Aughrim, The Mist Covered Mountain. The singer Pádraigín Ní Uallacháin sang a heartbreaking, acapella version of Úirchill an Chreagáin, or Creggan Graveyard, a vision of a promised land written by a poet in 18th-century Armagh, At the end of the service Paul Muldoon read, conversationally and carefully, Frost’s After Apple Picking.

“For I have had too much

Of apple-picking: I am overtired

Of the great harvest I myself desired.”

The cremation took place with more formal ritual, including an entire decade of the rosary, which took me back to my childhood kneeling on hard linoleum through nightly recitals of the prayer cycle. But then the whole congregation sang the traditional Scottish ballad The Parting Glass and there weren’t many dry eyes in the bleak crematorium chapel:

I’ll gently go and softly call, goodnight and joy be with you all.”

The music and the poetry had been chosen by Ciaran in the months before he died. In that time, after he’d been told his lung cancer was terminal, he wrote his last book. Still Life, a set of 17 meditations on paintings, which returns to the long lines of his early collections Belfast Confetti and The Irish for No. His publisher Peter Fallon delivered the finished book to his family just after Ciaran died. He had so wanted to read at the launch of the book, which he missed by 10 days. In those final months he met awkward expressions of sympathy with the words “It is what it is”.

That stoicism and knowledge that the end was coming permeates Still Life:

“A line of blue hills is contoured like a monumental sentence.

How strange it is to be lying here listening to whatever it is is going on.

The days are getting longer now, however many of them I have left.

And the pencil I am writing this with, old as it is, will easily outlast their end.”

Peter Fallon, the proprietor, editor and designer of Gallery Press, who brings so many finely-made volumes of Irish poetry into the world, published Ciaran Carson’s verse for 35 years. I was the publisher of his prose for only 10.

If I can claim a footnote in literary history it may be that I cajoled Ciaran into writing prose books. The opening lines of Belfast Confetti, when I first read it, were enough to make me feel I’d been shaken awake:

Though why Mule was called Mule is anybody’s guess. I stayed there once,

Or rather, I nearly stayed there once. But that’s another story.”

I discovered that this ribald city poet had another life as a gifted musician and that he had written a pamphlet about Irish music in his capacity as the traditional arts officer of the Northern Irish Arts Council. I persuaded myself that he could write a wonderful book on the subject if he was given his head. I wrote to him and we met in the Crown Bar in Belfast. I’d booked the then-hottest restaurant in the city, but after a couple of pints in the Crown Ciaran insisted that I should instead come home to eat with his wife Deirdre and the children. It was a wonderful night, the talk, the food, the music: Ciaran’s flute came out, and I think Deirdre played her fiddle. I know we drank a lot, we talked so much and I am no great talker, but I had the time of my life.

The book that Ciaran wrote in response to this commission is a mesmerising one about the making of music and is one of the best books in any genre that I’ve ever published. Last Night’s Fun happens to be about Irish music, but it’s also about the joy of improvisation and the craft of any musical tradition, and the business of drink and food and travelling that is a central part of musical life, even in elite orchestras.

If you love African-American jazz, as I do, it speaks across the Atlantic and across cultures. It’s about music that can vanish on the air, gifted musicians and performances that were recorded only in evanescent fragments. The first chapter opens with the cooking of an Ulster fried breakfast after a night performing in some Antrim pub and flows into a meditation on an accordion player called Joe Cooley, of whose performances there are a few fugitive recordings in lo-fi mono and who is remembered now by a single posthumous album released in 1975.

Ciaran described it as “one of the best recordings of Irish traditional music ever made”. Cooley came back from America before he died and toured for a while in the west of Ireland, where he was caught on tape a few times playing and speaking a little. Rereading that chapter I was reminded that Cooley died of lung cancer, and wondered if he, like Ciaran, smoked roll-ups for most of his life.

At Granta I published Carson’s The Star Factory and its successors, Shamrock Tea and Fishing for Amber, and his translation of Dante’s Inferno, a salty, colloquial version full of Hiberno-English idioms which has established itself as one of the finest attempts on that epic ever made in English.

When I moved to Faber that creative association with Ciaran came to a juddering halt. A revered literary institution can go through phases of regression, and Faber had turned a new page and drifted a long way from the open and inquisitive modernism of its founding editor TS Eliot. The lack of comprehension of Carson’s work, of any idea that its refusal of boundaries and categories might be worth embracing, was dispiriting.

The Star Factory, the first of that sequence of indefinable books, is not a predictable memoir, nor a survey of a city, but it is most certainly about “the ongoing, fractious epic that is Belfast” and it is very much about Ciaran Carson’s life. It is a homage to a city of dying crafts and trades, and to the local histories and the places being slowly obliterated by a changing economy and the literal violence of car bombs and forced expulsions and security barriers.

It is also an act of rescue, of trams, mills, shipyards, rural fields on the city margins, postmen (like Ciaran’s Irish and Esperanto-speaking father) on their walks, of obsessive, exalted lists – of the components of a steam locomotive, of the iron and glass and wood in the demolished Great Northern railway station, the names of shops, techniques, funerary monuments, children’s games, model aircraft, of the precise Piranesian look and feel of the scaffolding and machinery on a building site, of the shrubs in the undergrowth on waste land that formed the border between a Catholic and a Protestant estate. There’s a precise description of the complicated logistics of a traditional pre-funeral wake in a small terraced house.

The Star Factory is also, unavoidably, about a city marked by invisible frontiers, dangerous turnings, unspoken fears and a kind of segregation. But those divisions and hatreds seem, in the book at least, manageable and latent in that period of the 1950s and 1960s, part of an urban labyrinth through which an exceptionally imaginative child could wander.

Belfast is a dream city, partaking of the magic of the first films that Ciaran ever saw, Twenty Thousand Leagues Under the Sea and The Wizard of Oz, though it is also the nightmarish city of Odd Man Out, where Carol Reed set his delirious film of a doomed man trying to escape after a botched robbery. After 1969 all that wandering became more and more unthinkable, as a less-than-alert night-time stroll home from a city-centre pub such as the Crown could be fatal.

Yet Ciaran stayed in the city and from his house in north Belfast wrote some of the best Irish poetry to come out of Ireland since the death of Yeats. Seamus Heaney knew what he was doing when he anointed Carson as the first chair of the Queen’s University centre that bears his name: keep your friends close, your peers closer.

In Last Night’s Fun, Ciaran quotes the accordionist Tony McMahon, who produced Joe Cooley’s only album, writing about the last tune on the disc, The Sailor on the Rock: “When you play this track, listen between the notes for the great heart that was in this man’s music.” Read this book and Carson’s other work, and hear a very great heart.