Canada and Ireland: How a country across the Atlantic has influenced Irish affairs

Book review: Philip Currie recounts how the decision in 1948 to declare Ireland a Republic was announced in the Canadian capital Ottawa 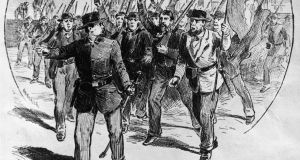 The Halibut Treaty, negotiated between Canada and the United States in 1923, was the first international agreement designed to conserve a salt-water fish species. It limited the commercial fishery in the northern Pacific in waters shared by Alaskan and Canadian fishing fleets, and stands as a milestone in efforts to protect fish stocks and the environment.

And, surprisingly, it was also a milestone in the long march toward Irish independence. For the first time since 1867, when Canada became a self-governing dominion within the British empire, its officials had negotiated and signed an agreement with a foreign power without British diplomats at the table.

1 Covid-19: Restrictions on travelling abroad may last several years, expert warns
2 Dublin has crowd-free weekend as pubs long for July 20th restart
3 Taoiseach urges British people not to holiday in Ireland at present
4 Maureen Dowd: Biden has his limitations but he’s no Trump
5 Keith Duggan: Bubba Wallace tweet shows just how troubled Donald Trump’s mind is
6 Off the charts: why this paint colour is Instagram's favourite
7 Forget bulging muscles; strength is all about nerves
8 This Connemara coastal home will blow you away
9 Anne Enright: ‘Nuala O’Faolain was an impossible person, to whom we owe so much’
10 Thandie Newton names names. Will Hollywood punish her?
11 Jack Charlton’s own grievances endeared him to Irish fans
12 ‘Jack used to call me his official grasshopper keeper. We had a great time’
13 My marriage is boring and polite. How do I make my husband interested in me?
14 50 best Irish albums of all time – in order
15 If international visitors are pariahs should we not be testing them on arrival?
16 Cluster of Covid-19 infections at Kerry ‘house party’ investigated
17 Taoiseach warns against being ‘overly judgemental’ of SF funeral attendance
18 Paschal Donohoe’s victory seen as a revolt against EU’s ‘big four’
19 Warning of serious brain disorders in people with mild coronavirus symptoms
20 Coronavirus: Cases surge in southern US states as Italy and Germany hold steady
21 Garda Ombudsman asked to investigate Barry Cowen leaks
22 David McWilliams: The Pandession is destroying Ireland’s Craic Economy
23 Reopening of pubs that do not serve food may be delayed beyond July 20th
24 Brightest comet of the century visible in Irish skies for the next week
25 Bonfires lit in loyalist areas of North despite Covid-19 restrictions
26 The things the Taoiseach doesn’t talk about in public
27 John Malkovich: ‘I know what I like, and I do what I like’
28 Many politicians remaining silent over online personal abuse
29 Man (30s) arrested over fatal hit-and-run in Co Tipperary
30 Gardaí seek public help over missing woman in Gorey, Co Wexford
31 Trump wears face mask in public for the first time
32 Ross O’Carroll-Kelly: ‘You see, the 50-person limit has made Mass tickets a hot commodity’
33 This jewel of a gravel garden needs weeding just once a year
34 Dave Hannigan: Notre Dame’s Fighting Irish leprechaun needs its ass kicked
35 Jack Charlton obituary: One of Ireland’s greatest adopted sons
36 Belgium helps Ireland to a Brexit boon
37 Johnny Depp: Ex-wife or friend defecated in bed in ‘fitting end’ to marriage, court hears
38 It’s time to end the Airbnb effect on Dublin’s housing supply
39 Paul McGrath pays tribute to ‘father figure’ Jack Charlton
40 Non-wearers of masks on public transport face fine and jail sentence
Real news has value SUBSCRIBE