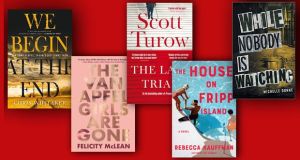 The disappearance of a child is every parent’s worst nightmare, but what if the child disappears to escape from a nightmare? Opening in Baltimore in the present day, but largely set in Australia in the early 1990s, Felicity McLean’s accomplished debut The Van Apfel Girls Are Gone (Point Blank, £8.99) is narrated by 12-year-old Tikka Malloy, who lives across the street from the Van Apfel girls.

The story begins with distressed 13-year-old Cordelia “Cordie” Van Apfel emerging from the Outback into the Sydney suburb from which she disappeared the week previously – but where has Cordie been? And where are her sisters, Ruth and Hannah? Curious and creative, Tikka blunders through the story as our perceptive but innocent guide as she leads us through a suburban labyrinth in which a cruel monster hides in plain sight. It’s a stunning piece of literary ventriloquism from McLean, who gives Tikka an offbeat but wholly believable voice (“Cordie kept strange, private things curled up in her carelessness”) as she delivers a child’s-eye view of domestic horrors reminiscent of Megan Abbott’s The End of Everything (2010).

1 ‘It was pitch black’ - Rescued teenager describes night afloat with her cousin in Galway Bay
2 Tipperary mushroom plant suspends work as staff test positive for Covid-19
3 Nine tenants evicted from north Dublin property by men in masks and dark clothing
4 Garda killer Aaron Brady will be almost 60 by time he leaves prison
5 Britain fails yet again to take Ireland into account
6 Coronavirus: 67 additional cases but no new deaths reported in the State
7 Coronavirus: Number of outbreaks in Irish homes rising for five straight weeks
8 ‘Staycation’ is just another sad casualty of the war against pointless pedantry
9 Housing activists assist tenants to re-enter property following eviction
10 Warning to beach-goers over venomous weever fish hiding in the sand
11 ‘A smoking gun’: Infectious coronavirus retrieved from hospital air
12 Worst sporting moment: White knuckle ride on a hate-filled night at Windsor
13 Thirteen bizarre, brilliant things we’ve learned from podcasts
14 Avoca warns of redundancies due to coronavirus
15 Turn tomatoes and feta cheese into something magical
16 Conor Pope’s staycation diary: ‘It’s like I’m staring at a Polaroid of my childhood holidays’
17 Diarmaid Ferriter: Island mentality and threat of infection
18 Aaron Brady, the man who said with pride he was a cop killer
19 Donald Trump indulges false ‘birther’ theories about Kamala Harris
20 Grounded Aer Lingus pilots develop fix for turnaround glitches
21 Inside Meghan and Harry’s new $14.7m nine-bed, 16-bath California home
22 Taxi app Free Now blames ‘technical issues’ for driver payment delays
23 Children in Dublin who use public transport should walk or cycle, education dept advises
24 Man facing trial over Kevin Lunney false imprisonment challenges court jurisdiction
25 Lucky to be alive - Cousins rescued at sea after clinging to a lobster pot for 15 hours
26 Covid-19: Taxi drivers, plumbers and carpenters among self-employed to get new €1,000 grant
27 ‘Overwhelming’ support for closing streets around Grafton Street to traffic
28 Taoiseach warns against ‘second systemic shock’ of no-deal Brexit
29 ‘It was like somebody put a furnace in my core’: Michelle Obama on menopause
30 GAA in Ballymun: The whole team were called ‘scumbags’ by grown adults
31 Coronavirus: We must save lives but we also need to live
32 Virgin Media vows to withhold sports channels until Eir ‘pays its bill’
33 Where are they now? The mixed fortunes of gang linked to Det Garda Donohoe killing
34 Midlands bailout: 20 per cent top up on restart grants for three counties
35 National Broadband Plan customers to get triple the expected download speeds
36 Emollient Micheál Martin hears baby talk from Boris Johnson
37 The ‘Templemore Miracles’: How a fake bleeding statue led to an IRA truce
38 Shane Lowry right in the mix at Wyndham after brilliant 63
39 How an Italian in Ireland makes pasta with fresh tomato sauce
40 ufurnish: ‘It’s like Skyscanner, but for furniture’
Real news has value SUBSCRIBE