Barracoon, The Story of the Last Slave: a momentous book 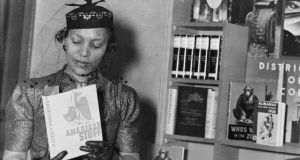 Author Zora Neale Hurston (1891-1960) in New York, circa 1937: she refused requests to publish the book “in language rather than dialect”. Photograph: PhotoQuest/Getty Images

Book Title:
Barracoon: The Story of the Last Slave

“I want to ask you many things. I want to know who you are and how you came to be a slave; and to what part of Africa you belong, and how you fared as a slave, and how you managed as a free man.” So begins Zora Neale Hurston’s book-length account of a series of interviews with Oluale Kossola, the last known survivor of the Atlantic slave trade.

On 14th December, 1927, Hurston undertook the first of a series of visits to the town of Mobile, Alabama, to meet Kossola (known in America as Cudjo Lewis). Born circa 1841, in the town on Bantè in the West African nation of Benin, Kossola was captured by Dahomian warriors and held in a barracoon before being sold to his slavers and trafficked to the United States. In this momentous book, which represents both the deftness of Hurston’s work as a cultural anthropologist and the sort of compassionate and crystal-clear prose that characterises her masterpiece, the 1937 novel Their Eyes Were Watching God, Hurston seeks the answers to these questions, but with a keen and sensitive emotional intelligence. Underpinning it all is her deep knowledge of African-American folklore and culture. From Cudjo, as she tells us in her introduction, she wants to know: “How does one sleep with such memories beneath the pillow?”

Barracoon was initially requested for publication by Viking Press, but “in language rather than dialect”. Hurston refused such a revision, rightly seeing that dialect is integral to the vitality of her work. The resultant book, published now for the first time, is important because it serves to remind us that slavery did not end with abolition, but that it evolved. Its focus on the period of enslavement is relatively brief, giving attention instead to the terrors of slavery from before the moment of disembarkation – the violent uprooting of people, the destruction of communities, the conditions of the barracoons. It recounts the inhumanity of the holding pens and slave auctions in America, and later the violently unequal society in which Kossola lived once he was released from slavery. As Kossola tells Hurston about the barracoons, “When I think ‘bout dat time I try not to cry no mo’. My eyes dey stop cryin’ but de tears runnee down inside me all de time.”

Where Barracoon differs from many slave narratives, as Deborah Plant notes in her wide-ranging and powerful introduction, is in its lack of an explicit political agenda. Whereas the narratives of Frederick Douglass or Harriet Jacobs, for example, speak to the issues of women’s rights, abolition and racial inequality, Kossola’s account (perhaps because he was born in Africa, a free man) looks back into history, firstly into the barracoons, then into a time of peace and belonging beforehand. In this way, it achieves in reverse the sort of radical sanctuary that we find in Danez Smith’s recent collection Don’t Call Us Dead, which imagines “what it’s like to live / someplace that loves you back”.

However, it would be wrong to suggest that Barracoon does not find deep political resonances with 21st century racial inequalities. In fact, Hurston seems to frame the narrative in order to bring out the political power of Kossola’s story. One chapter, for example, is wryly entitled Kossola Learns About Law, and details the brutal prejudice of the legal system against the black body, foregrounding both its physical and discursive violences. Elsewhere, Kossola covers police brutality and the insidious complicity between capitalist infrastructural development and racism.

When Zora Neale Hurston first asks Kossola for his story, he raises a tearful face to her: “Thankee Jesus! Somebody come ast about Cudjo! I want tellee somebody who I is, so maybe day go in de Afficky soil some day and callee my name and somebody say, ‘Yeah, I know Kossola’.” As in the back pages of Claudia Rankine’s Citizen, in which there is a growing list of the black men killed by police brutality in the US, here the act of naming is political, is a mantra. And Kossola’s name, given to him by his mother, is itself a poem of hope. It means “I do not lose my fruits anymore”, or “my children do not die anymore”.