Barefoot Pilgrimage: A Memoir by Andrea Corr – Fresh but flighty 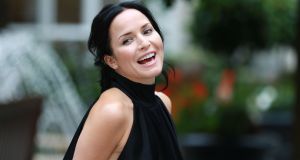 Readers expecting major revelations about the Corr siblings or previously undocumented details of the band’s history are likely to be disappointed. Above, Andrea Corr. Photograph: Nick Bradshaw

“I’m the darkest of them all,” sang Andrea Corr on Song of Solomon, one of the standout tracks on the group’s last album, Jupiter Calling. Those words might also serve as a veiled comment on her own sensibility. There was always something of the night about the youngest Corr, a streak of melancholia that enhanced and sometimes subverted the band’s otherwise sanguine nature and wholesome image. This was evident as early as Forgiven Not Forgotten, the title track of their debut album. Ostensibly, a song of loneliness, abandonment and grief, its lyrics also hinted at romantic suicide. Years later Andrea recalled how her husband-to-be, Brett Desmond, had initially perceived her as a self-contained, unknowable creature, sitting in a corner “writing poetry about death”.

The inspiration for this memoir are literature’s two great themes: love and death. The writing commenced in 2017, propelled by “An overwhelming need to write it down because if I died now too, this strange, normal, family, human love story as it really was to me, might also die.” In 2015 Andrea’s father, Gerry, had died from heart failure. This reignited in Andrea poignant memories of her mother’s sudden death back in 1999, aged 57, an event that devastated the family. “It had the most profound effect of anything in my life,” she later acknowledged.

10 Walk this way: 17 tips for getting the most from your daily lockdown outing

14 Fauci reveals what it was really like working for Trump

16 Eat, move, think: What you need to know about children’s health (teenage girls)

19 Mary Lou McDonald: Government must be active in conversation on a united Ireland

21 Blindboy Boatclub: ‘I had the choice of being a psychotherapist or a mad bastard’

23 Why should the Leaving Cert have to be ‘brutal but fair’?

29 Suzi Quatro: ‘If he’d done that backstage he’d have been singing soprano for the rest of his life’

30 ‘I worry about my child falling behind, but my own work is beginning to suffer’