As a society, are we losing our empathy?

Empathy can help curb recidivism and speeds up the healing of patients in hospitals, and Peter Bazalgette reckons it can solve a lot of our currents societal problems 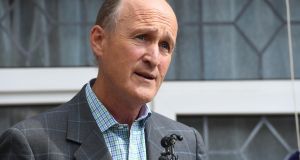 Peter Bazalgette: “If you take the average working environment now you spend most of your time not talking to people or even phoning them but sending them an email.” Photograph: Stuart C Wilson/Getty

On January 20th, 2008, then US president Barack Obama stood before a congregation in Ebenezer Baptist Church in Atlanta and said: “The biggest deficit that we have in our society and in the world right now is an empathy deficit. We are in great need of people being able to stand in somebody else’s shoes and see the world through their eyes.”

Science has provided evidence for empathy. In 1992, a group of Italian neuroscientists observed neurons in macaque monkeys that fired not only when they picked up a peanut but also when they saw a person pick up a peanut. Later, similar “mirror neurons” were identified in humans. So why do we sometimes override our better nature?

In his new book, The Empathy Instinct, author and former Endemol TV producer Peter Bazalgette explores the scientific understanding of empathy through the use of functional magnetic resonance imaging (fMRI). Bazalgette was first compelled to take a closer look at empathy when he was the chairman of Arts Council England and was faced with a 30 per cent cut in government funding. In order to articulate the best case for public investment in arts, he came up the idea of empathetic citizens. “We knew that the arts tell human stories, and enable us to put ourselves in other people’s shoes and to see things from other people’s points of view, and in that sense they are pro-social.”

There was also another source of inspiration. Bazalgette was asked by David Cameron to chair the Holocaust Memorial Foundation. “Talking to people who had to flee or whose relatives were killed in a society apparently without empathy, you get to think of its value even more.”

In the book, he looks at conflicts in Armenia, Rwanda and Germany. “I wanted to contrast the overall genocide that took place in those countries with the small number of individuals who swam against the tide and showed empathy even at the risk of their lives.”

Bazalgette returns often to the idea of tribalism, that natural instinct of human beings to stick to their own kind. Does he think we have seen a recent retreat into tribal myths, such as “Make American Great Again”?

“You could argue in a broad sense against the sweep of history that we’re less tribal. We’ve managed to co-exist in busy cities with public transport but the point is that while living in a less tribal environment we still have the seeds of tribalism within us. Empathy has a downside. It makes us loyal to our families and to our own tribes and therefore hostile to others. Therefore we say, how can we reach out beyond your tribe, which is after all what civilisation is.”

He sees an irony in anyone who voted for Brexit as a way of retreating into the tribe. “The truth is that when it leaves the EU, it’s got to be more open to the world’s cultures than it has ever been before . . . If you want to trade with people you have to be open to cultures as well.”

Looking at empathy’s role in the healthcare system, he relays some of his own poor experiences in hospital beds and takes a look at research that shows that patients who are treated more empathetically actually seem to heal faster.

“There are some doctors that are not naturally inclined that way. They’ve got relatively low emotional intelligence, but if we see the value of it, then we can train people. That’s why many doctors in their qualification courses now have arts elements like storytelling to get them to understand these signs in people when they’re in distress.”

He also believes there is a severe empathy deficit in how we treat prisoners, leading directly to reoffending. “In England, we have a recidivism rate approaching 60 per cent, and in Norway it’s 20 per cent.” In Norway, there is a focus on rehabilitation.

“This statistic that one in four people in English prisons grew up in care – doesn’t it make you weep? When you think what was done to them as a kids, how deprived they were? It isn’t a question of ‘I want to punish this person’. I want to make this person not do it again. I want to protect society by rehabilitating people.” He believes in the power of restorative justice, which often allows for meeting and conversation between victim and offender.

Talking to each other

And it’s not just the workplace that needs more conversation. “A family that eats together stays together. That’s when you talk to each other and talking to each other is an act of empathy. In social situations now parents are often with their kids on their mobile phones, and they’ve stopped talking to their children. What are we doing? We’ve got to retrain ourselves.”

The arts are key at a time when people would appear to be less empathetic. “I think that broadcasters have an incredible role to play . . . I call it the empathy gymnasium; the rooms of it are novels and soap operas and computer games and theatre and film and all of them are ways in which we rehearse and inform our empathy instinct.”

In a time of information overload, every conflict and disaster is relayed to us as it happens. Is it possible for us to run out of empathy? He thinks there is a visible contrast when you look at times when our empathy has been triggered on a grand scale. Last year, the UK had decided not to take Syrian refugees into the country, “and then there was a single photograph of a small boy called Alan Kurdi – the little toddler who was on the beach in 2015. He could’ve been your child; he could’ve been my child. Within 24 hours, Britain had said it was going to accept Syrian refugees. We had burnout for the population as a whole because we couldn’t identify with them.”

He doesn’t think single-mindedness belongs to the left or right exclusively but acknowledges that “extremism may feel comforting because it apparently gives you certainty. Extremism is one point of view and one point of view doesn’t normally encompass the needs of many people. The great benefit of a plural democracy is plurality of opinions and how you can together work to find solutions that work for everyone, and that’s by listening to other people.”

I wonder if Bazalgette feels that his vision is somewhat utopian. He laughingly replies: “You know how you get to Utopia? Step by step.”

The Empathy Instinct is published by Hodder & Stoughton