Apropos of Nothing by Woody Allen: The glib quips seem badly out of place 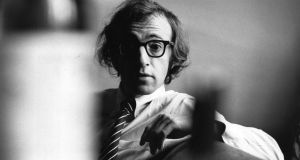 Many readers will be grateful that Woody Allen’s memoir has arrived in a time of face masks and latex gloves. So toxic is the volume that some may be tempted to rinse it in chloroxylenol before placing on a lectern 2m distant.

The surrounding furore hardly needs to be reiterated. It is more than a quarter of a century since the film-maker was accused of sexually molesting his adoptive daughter Dylan Farrow. The story ebbed and flowed until, in the wake of the #MeToo scandal, it swelled into an unavoidable tsunami. Hachette, Allen’s original publisher, adopted a strategy guaranteed to annoy everyone: first agreeing to run the volume, then dropping out at the last moment.

1 Quarantine process to be tightened as health officials grow nervous
2 US passengers fly into Dublin: ‘I’m here for six days. I guess I’ll have to stay inside’
3 Back with our old friends at eir – and nothing seems to have changed
4 ‘I thought it was a hoax’: Patient dies after Texas Covid party
5 Elvis Presley's grandson dies aged 27
6 Una Mullally: Phoenix Park travesty is a litmus test for the Greens
7 White House turns its fire on Anthony Fauci over Covid-19 comments
8 Covid-19: Restrictions on travelling abroad may last several years, expert warns
9 I’m only starting to realise how much the pandemic affected my children
10 Disease expert says jailing tourists who breach quarantine would send clear message
11 Keith Duggan: Bubba Wallace tweet shows just how troubled Donald Trump’s mind is
12 ‘He’s so strapping and virile’: Patrick Stewart at 80, by Shatner, McKellen, Grammer and more
13 Majority of employees don’t want to return to pre-Covid working patterns
14 How will the ‘Ryanair generation’ of emigrants fare post-Covid?
15 Q&A: All you need to know about new face covering rules on public transport
16 Actor Kelly Preston, wife of John Travolta, dies aged 57
17 Ken Early: Another Mourinho masterclass in going through the motions
18 ‘It’s not normal to go to the toilet 15 times a day’
19 Malachy Clerkin: Sleep well Jack, you made us all happy
20 First US federal execution in 17 years set to go ahead
21 Maureen Dowd: Biden has his limitations but he’s no Trump
22 ‘No live music’: Three words that strike at every musician’s soul
23 Homeworking is depriving me of juicy gossip
24 Incumbent Andrzej Duda wins Polish election with 51.2% of vote
25 50 best Irish albums of all time – in order
26 Primark rejects £30m bonus for bringing back staff
27 Coronavirus: South Africa reimposes alcohol ban as cases spike
28 Thandie Newton names names. Will Hollywood punish her?
29 Manchester City’s European ban lifted and fine reduced
30 If tourists are such pariahs should we not be testing them on arrival?
31 Forget bulging muscles; strength is all about nerves
32 Gardaí given guidance on new face mask regulations hours before they become law
33 Jack Charlton’s own grievances endeared him to Irish fans
34 Tobacco giant’s menthol-ban substitutes take 5% share of Irish market
35 Leisure facilities continue to close as Covid-19 magnifies insurance crisis
36 Investors in Irish solar energy fund in line for €20m payout
37 Tusla policy ‘endangering’ victims of child sex abuse, say therapists
38 Taoiseach urges British people not to holiday in Ireland at present
39 Dublin has crowd-free weekend as pubs long for July 20th restart
40 Stunning image of comet Neowise captured over Dublin Bay
Real news has value SUBSCRIBE