Anna Carey: ‘Today’s teenagers are pleasingly similar to my generation’

‘Brought to Book Q&A’: Teen fiction author and critic on writing the sort of books she would have liked to read 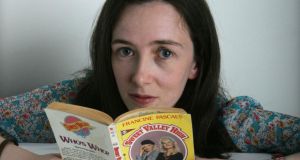 Anna Carey with a copy of one of the Sweet Valley High books, her guilty pleasure reads as a teenager. Photograph: Cyril Byrne/The Irish Times

Anna Carey is the author of four novels for young adults, the most recent of which is Rebecca Is Always Right. Her first book The Real Rebecca won the Senior Children's Book of the Year prize at the 2011 Irish Book Awards.

I read The Lion, The Witch and The Wardrobe when I was five - it was the first “proper” book, as opposed to a picture book, that I ever read. I remember that the only words I couldn’t read were dryad and naiad. I adored it so much that as soon as I finished it I read it all over again.

I had a lot of favourites, so I can’t pin it down, but the shortlist is The Lion, The Witch and the Wardrobe, A Little Princess by Frances Hodgson Burnett, Ballet Shoes by Noel Streatfeild, Charmed Life by Diana Wynne-Jones, The Secret Diary of Adrian Mole by Sue Towsend, the Bagthorpe books by Helen Cresswell and Richmal Crompton’s William books.

If I had to pin them down, the books I love most are The Diary of A Provincial Lady by E.M. Delafield, Gaudy Night by Dorothy L. Sayers, The Pursuit of Love by Nancy Mitford, Great Expectations by Charles Dickens, The Compleet Molesworth [SIC]by Geoffrey Willans and Ronald Searle and The Element of Lavishness: Letters of Sylvia Townsend Warner and William Maxwell 1938-1978.

“Funny how potent cheap music is.” Not from a book, but from a play - Private Lives by Noel Coward. It’s my favourite defence of popular culture (by someone who wrote great pop songs)

Maura Laverty. A lot of early 20th century Irish fiction is very weighty, but she always wrote with such liveliness and humour. Her two novels Never No More and No More than Human are two of my favorite books.

Which do you prefer - ebooks or the traditional print version?

Print. I do read e-books, but there’s always something weirdly insubstantial about them…

I’m counting my large collection of Persephone books, whose matching grey covers look particularly lovely collected together, as one book. They’re so beautiful. I also love the Edwardian Everyman editions with the William Morris-esque endpapers, especially my copy of A Tale of Two Cities which belonged to my great-grandmother and which I read, and adored, when I was 14.

In a small box room full of bookshelves, piles of books, and a sewing machine. With frequent tea breaks. And if I get really stuck I go for a walk.

The Magic Toyshop by Angela Carter.

A major character came out as gay in my last book, and I was really concerned about getting that right. So I met a brilliant group of lesbian teenagers at the wonderful LGBT youth organisation BelongTo, asked them about their own experiences and ow they’d like to see coming out depicted positively.

The Compleet Molesworth. Basically defined my sense of humour at an early age.

Backlash by Susan Faludi. It’s the best book about critically consuming culture ever written. I read it when I was 17 and it changed the way I watched and read things forever.

Rae Earl’s My Mad Fat Teenage Diary and its sequel. This would, however, have been impossible as the books are essentially Earl’s real-life teen diaries and she’s only a couple of years older than me. Unlike Earl, I luckily didn’t struggle with my weight or serious mental health issues, but I could retrospectively relate to an awful lot in the books, and I’ve never read a better depiction of that adolescent conviction that you’re somehow missing out on the real grown-up world. And the books are both heartbreaking and very, very funny.

Write the sort of book you’d like to read.

Well, I write book reviews for a living! So I have to take them seriously, but I also know how subjective they are. I have got a few negative reviews that annoyed me because I just thought the critic didn’t get the book at all but generally I think “fair enough” if I get a bad review. Luckily most have been good so far…

I am slightly depressed by the gradual swallowing of independent presses by multinational conglomerates that’s happened over the last few decades. Virago has never been the same since Little Brown bought them. I also saw the appointment of Charlie Redmayne, whose background is in digital development rather than editorial and who seems more interested in brands than in finding brilliant books, as the boss of Harper Collins in the UK, as a rather negative development. But there are still exciting new imprints like Galley Beggar Press around, so hopefully a new wave of small publishers will emerge to challenge the giants.

For obvious anniversary reasons, there have been a lot of books about and set during the first World War and its aftermath, which is fine by me.

I’ve learned a lot about how people in the past were both similar to and very different from us. I’ve learned that there are people I’ve never met, some of whom died before I was even born, who thought and felt the same way I do. I’ve learned how to view the world and culture more critically and, I hope, more kindly.

That after starting stories I never finished for the first 30 years of my life, I can actually finish a whole book when I put my mind to it. And that today’s teenagers are pleasingly similar to my own generation.

There’s a story by P. G. Wodehouse called ‘Sonny Boy’ in which Bingo Little has a bet with his own bookie over which of them has the ugliest baby. Bingo, whose baby has been described as “as pronounced a gargoyle as ever drained a bottle”, is sure his offspring will be victorious when they ask a passing policeman to act as judge. The policeman claims that he himself has “a baby with a face that could stop a clock”, but when the sun hits the bookie’s baby’s face, causing her to contort it in a hideous grimace, the policeman raises her arm declares her “the winnah!” It makes me laugh every time I read it. And I’ve found that in real life even the cutest babies enjoy it if you wave their arms and declare them “the winnah”!

The second World War in London. I will read pretty much anything written or set on the Home Front. I’m actually thinking of writing a book about an Irish girl in wartime London...