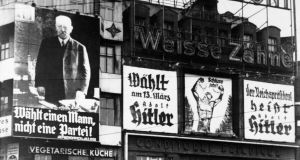 1932 election posters in Berlin for candidates Hindenburg and Hitler. The Nazi Party had won less than 3% of the vote in the 1928 general election. Photograph: Ullstein Bild via Getty

In the current climate of economic turmoil, resurgent nationalism and anti-global policies, people could be forgiven for looking to the distant past for suitable parallels that might offer guidance on where we are heading. With right-wing authoritarianism on the rise, the echoes of the early 1930s are difficult to ignore even if the parallels should not be over-stretched.

Paul Jankowski makes precisely this point in his engaging and thoroughly researched book, All Against All, which examines the dramatic changes that occurred in Europe and Asia during the long winter of 1932-33, when nationalist egoism triumphed over whatever was left of global cooperation for peace and prosperity. Jankowski, a history professor at Brandeis University in Massachusetts, has previously written about pivotal moments in early 20th-century European history, notably in his critically acclaimed book on the Battle of Verdun, the longest military engagement of the first World War.

1 Chairman of Fáilte Ireland resigns after it emerged he is holidaying in Italy
2 Anne Doyle: ‘Depression? I know what it is, and it’s a b*tch’
3 Urgent report on Dublin eviction ordered by Deputy Garda Commissioner
4 36 hours on Northern Ireland’s Causeway Coast: ‘Everyone is having a wild time’
5 David McWilliams: It is time for a major property reset
6 Frank McDonald: What’s not to like about Dublin’s new Kevin St development? Quite a lot
7 A million trees, including 400,000 oaks, to be destroyed this week
8 Inside the O’Brien Fine Foods factory in lockdown Kildare
9 ‘It was pitch black’ - Rescued teenager describes night afloat with her cousin in Galway Bay
10 Jennifer O’Connell: Why is Trump afraid of Kamala Harris?
11 Inside Meghan and Harry’s broken relationship with the royal family
12 Cousins went paddle boarding at Furbo as usual location was cut off due to Covid-19
13 Restaurant review: A culinary treat in the west of Ireland
14 ‘Embarrassment, anger, sadness’: the decline of the great Stephen Hendry
15 ‘I’m going to ask you something,’ Sorcha goes, ‘Have you two been sleeping together?’
16 Britain fails yet again to take Ireland into account
17 Carrick-on-Shannon native left reeling by plan to raze home
18 Life, death and the secrets that lie between
19 Irish team wins international competition with dementia app
20 ‘Our fear is we will be forgotten’: Flooding hits west Cork for second time this week
21 Inside the world’s largest sports air dome just outside Knock
22 We need a clear message from Government on how to live alongside Covid-19
23 Turn tomatoes and feta cheese into something magical
24 Mike Pence fretting as Kamala Harris shakes up Republicans
25 New Zealand Covid-19 outbreak grows as Australia still struggles
26 The hatred of HP Lovecraft: Racist, anti-Irish bigot and horror master
27 Fresh uniform every day? Some schools do solo runs
28 Conor Pope’s staycation diary: ‘It’s like I’m staring at a Polaroid of my childhood holidays’
29 Garda killer Aaron Brady will be almost 60 by time he leaves prison
30 Mikel Arteta given more control at Arsenal as Raul Sanllehi leaves
31 Shane Kenny convinced Achill water contamination triggered medical relapse
32 Animal magnetism: The Kilkenny farm taking social media by storm
33 New Dublin auction house sells everything from pulpits to classic cars
34 Aaron Brady, the man who said with pride he was a cop killer
35 Housing activists assist tenants to re-enter property following eviction
36 Maria Steen: Only a sick society can see children as a burden
37 Nine tenants evicted from north Dublin property by men in masks and dark clothing
38 Landlords’ group concerned with manner of Dublin eviction
39 Worst sporting moment: White knuckle ride on a hate-filled night at Windsor
40 As ever, Ronnie O’Sullivan sparks debate at the Crucible
Real news has value SUBSCRIBE