A true picture of Picasso

The acuity of TJ Clark’s thought, allied to his sweeping breadth of reference, makes him the ideal interrogator of Picasso, argues John Banville 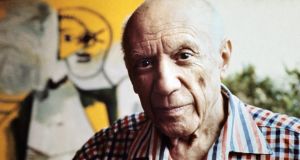 At the heart of this wonderful book there is a telling passage in which the author quotes Picasso remarking to a friend that he preferred his painting The Three Dancers of 1925 to the later and more publicly ambitious Guernica.

“It [the Dancers] was painted as a picture, without ulterior motive,” Picasso said. Clark finds this puzzling, and wonders if the painter meant that “the work happened essentially without him”, and calls to his aid Rimbaud on alienation from the self. Surely, however, the matter is simple. The Three Dancers is a fearsome, indeed a savage, work, but it is pure painting; Guernica, for all its violence and power, was intended as a political statement as well as a work of art, and for that reason it is, essentially, kitsch.

One does not lightly lay such a charge against one of the modern world’s most revered cultural artefacts. However, artists of Picasso’s type, few though they be, are always in danger of imagining that because they have achieved critical success and earned much money and fame, they must have profound things to say about the public life of their times. The inevitable result is either fatuity or bombast, or both. Georges Braque, co-deliverer with Picasso of the coup de grâce to traditional European painting, summed up the matter when he was asked in old age for his opinion of his friend and said, “Pablo? Oh, Pablo used to be a good painter; now he’s just a genius.”

This is spiteful and unfair, of course, but there is a certain truth to it as well. As the critic Cyril Connolly said, the only business of the artist is to make masterpieces. Putting one’s genius – whatever that may be – at the service of Stalin, for instance, as Picasso did in his bumbling way, is always going to be a mistake, to say the least.

TJ Clark is that odd combination, a Marxist and a Nietzschean; he is also a great critic. His love for and understanding of Picasso’s work is evident in every line of this book, which is based on the text of the Mellon Lectures delivered at the National Gallery of Art in Washington. He is an incomparably close reader of paintings, and the acuity of his thought, allied to a sweeping breadth of reference, makes him the ideal interrogator of Picasso and his achievement.

Clark opens his introduction with a blistering assault on “the abominable character of most writing on [Picasso],” its “prurience, its pedantry,” and the “wild swings” it makes between “fawning adulation and false refusal-to-be-impressed”. No doubt John Richardson, author of an ongoing, multi-volume biography of Picasso, felt his ears burning when Clark took the podium in Washington and spoke those words. Yet even the most assiduous student of Picasso’s art must surely crave the odd helping of cakes and ale.

Clark’s thesis in these wide-ranging lectures is clearly stated in his introduction. The turn of the twentieth century, he contends, saw “the end of something called bourgeois society”. We might expect a left-wing critic to mark and approve the evidence of this closure in the work of an iconoclastic and radical artist. Clark insists, however, that Picasso “profoundly belonged, for all his living as a young man on the margins of society, to the nineteenth-century civilization in which he was brought up”. Picasso’s lifelong harking back to that vanished world, which he himself had worked so tirelessly to destroy, is apparent, according to Clark, in the importance he attaches to the room.

Profound reading
This may seem a simple, even a homely, insight, nevertheless it allows of a profound reading of Picasso’s aesthetic and opens up a broad critical approach to his paintings, certainly in the period covered by these lectures. That period is only about half of the artist’s working life; much more was to come, especially the various serie sof etchings, such as the Vollard Suite, which some, including this reviewer, consider to be among his finest achievements.

In the second lecture, Room, Clark offers a reading of Cubism, its sources and aims, that to many will seem paradoxical. The movement came, he says, out of Bohemia, and was, indeed: “Bohemia’s last hurrah, its summa; and in this last flaring it laid out before us – lovingly, ironically – the claim that the life of art had made to the pleasures of the middle-class [that is, the nineteenth] century. The pleasures, the decencies, the self-possession – above all, the sense of being fully and solely a body in a material world, and of this as the form of freedom.”

Cubism, therefore, is at once laying waste to a world – the nineteenth-century bourgeois world – and at the same time celebrating it and mourning its passing. The result is “this proximity, this tactility, this coziness”, which is “the condition of endless mad inventiveness”. Indeed, one of the notable features of Clark’s book is the pleasure it takes in the gaiety, energy and abundance of the world according to the Cubists. This certainly is a welcome and refreshing change from the usual po-faced treatment of the subject. Here is one critic who never loses sight of the fact that what art, even the darkest art, offers us first and foremost is delight.

But then there is Nietzsche, somewhat aided and abetted by Wittgenstein – yes, we are in the high places, here. Clark fixes on a typically overwrought, knotty passage from Nietzsche’s Genealogy of Morals in which the philosopher mocks “these hard, strict, abstinent, heroic spirits who constitute the honor of our age, all these pale atheists, anti-Christians, immoralists, nihilists” – some may think this a fair description of the genus to which Nietzsche himself belonged – who imagine they have freed themselves from the shackles of “the ascetic ideal” but who “are by no means free spirits, for they still believe in truth”.

It is at this point that a certain confusion seems to enter into Clark’s argument. Nietzsche says that by becoming conscious of it we moderns have made a problem of the “will to truth”, and “it is from the will to truth’s becoming conscious of itself that from now on . . . morality will gradually perish . . .” Clark seems to read these admittedly opaque passages as some kind of denial of truth itself. He quotes a note he made when he first read the Genealogy: “So what will Art be . . . without a test of truth for its findings, its assertions; without even a will to truth?” But surely Nietzsche is saying the opposite, that art – and, not incidentally, morality – will be challenged not by a withering away of truth but precisely by our having become conscious of the will to truth in ourselves and thereby making a problem of it?

Perhaps the point is not so important as it seems. Clark has a profound and sympathetic understanding of art, yet he wants the artist, despite his “blithe self-absorption”, to be a force in the world of commonplace experience and action, so that out of his work “can come, in times of catastrophe, [one might ask, when has there been a time that was not a time of catastrophe?] the fullest recognition of what catastrophe is – how it enters and structures everyday life.” Hence Guernica. The picture, Clark contends, “makes its giant size . . . work to confirm a wholly earthbound, and essentially modest, view of life.” Picasso does this by domesticating the picture’s gigantism; we are back in the room. Tracing the making of Guernica through a series of photographs taken of it by Picasso’s lover Dora Maar at various stages of its execution, Clark in his utterly fascinating final lecture shows how the artist returned inexorably to the necessary confines of a certain space.

At first the action of Guernica seems intended to take place outdoors, but as the work progresses the scene, such as it is, gradually retreats indoors, a process which is completed, only hours before the completion of the painting, when Picasso grounds his screaming women and tormented beasts on, of all things, a tiled floor, thus “making an imaginatively habitable three dimensions, one having a specific character, offering itself as a surrounding whose shape and extent we can enter into. In Picasso’s case, ‘imaginatively habitable’ equals making an interior of sorts.’

Does this grounding of the picture neutralise the high rhetoric of its political intentions? Does it, in other words, authenticate it as a work of art and banish the element of kitsch? Each viewer will have to decide that question for himself or herself; in doing so, there could be no sounder counsel and guide than Picasso and Truth. And whatever the answer you arrive at, be assured that after reading this book you will not look at Picasso’s paintings, not just Guernica but all his paintings, in quite the same way ever again.